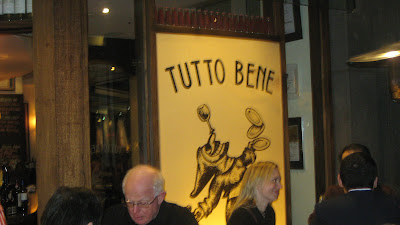 Whether Tutto Bene is really a two hat restaurant, as it was according to AGF in 2006, or a no hat restaurant, as AGF now rates it, is debatable but what is really odd is that I doubt that it has really changed much over the last few years but its ratings have changed drasticly. It is still presided over by Simon Humble, whose reputation as a master risotto maker is undiminished. Service, which has been criticized from time to time, may be variable but surely not that variable. The place is older but its Bistro/restaurant atmosphere is resistant to aging and if the place had become so crummy why was it packed when we visited the othe night. Not only that most of the food was pretty good.
We had a pre theater dinner and our waiter, Luke, was conscientious about keeping our meal coming at a reasonable pace. There were a number of tempting starters , referred to on the menu as Primo Platti. I enjoyed the very flavoursome red wine stewed baby octopus with potatoes and capers $16.50 =0>and Sandra was partiucularly pleased with the vitello tonnato 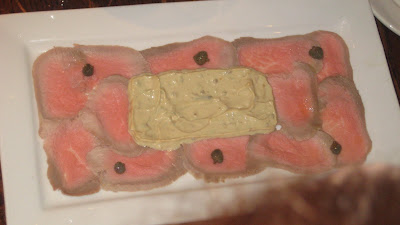 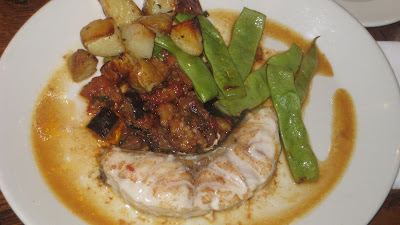 was a very lightly and moistly succulent Hapuka, a New Zealand import. The slow braised baby goat and vegetables with baked polenta and roasting juices $34.50 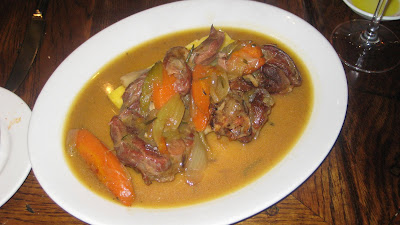 surprised me with its tenderness and lack of gamey taste. If you're not having one of the dozen risotto's 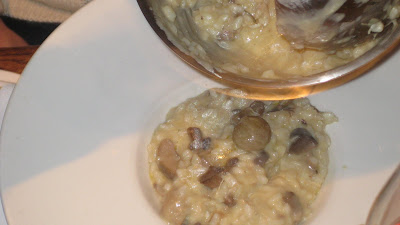 this is a good choice. The mushroom risotto was excellent butmthere was one serious disappointment. The bistecca di vitello alla fiorentina - 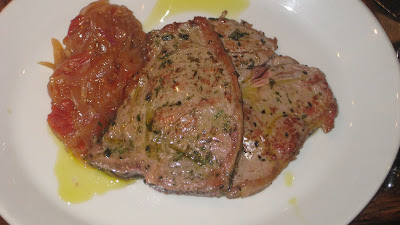 Two baby veal T bones marinated in sage and rosemary with cherry tomato relish $40.00. The most expensive main course it was tough and grisly. It was hard to cut even with a serrated edge steak knife and even harder to eat. Unfortunately we were too late to try the famous prize winning gelati!
Score: 14/20
Posted by Elliot and Sandra at 10:43 PM

A master of risotto...aaahhhh, love the stuff!

I practised for a year to prepare for a risotto competition and the next year they changed it to a pasta competition! Humble has a no stir method for risotto but I now make it in the thermomixer.


We bumped into your blog and we really liked it - great recipes YUM YUM.
We would like to add it to the Petitchef.com.

We would be delighted if you could add your blog to Petitchef so that our users can, as us,
enjoy your recipes.

Petitchef is a french based Cooking recipes Portal. Several hundred Blogs are already members
and benefit from their exposure on Petitchef.com.

To add your site to the Petitchef family you can use http://en.petitchef.com/?obj=front&action=site_ajout_form or just go to Petitchef.com and click on "Add your site"