This fine example of charcuterie was served at PM24 where executive chef Phillipe Mouchel presides. 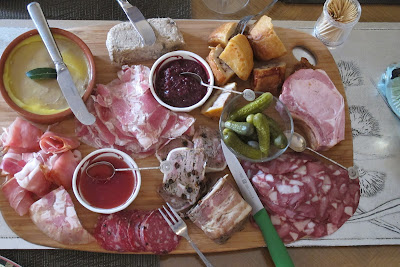 The Neglected Art of Charcuterie
Charcuterie is much maligned and often overlooked branch of cookery devoted entirely to the production and perfection of prepared meats and sometimes fish. Products such as bacons, hams, sausages, confit meats and pates, with pork as their central ingredient, all fall under the charcuterie umbrella. Despite using an ancient method, the culinary history of charcuterie of course comes from France and combines delicate artistry with scientific logic to produce appetizing and flavoursome results.
Etymology and Origins
The word charcuterie derives from the words ‘char cuit’ which translates approximately to mean cooked meats. The roots of the process lie in the need to make meat palatable and long lasting, so basically to preserve its goodness. The process itself can be traced back over 6,000 years to the Roman Empire when those in charge demanded something a little more refined for their palates. However, it’s in the French Middle Ages that we really see the art of charcuterie blossom and prosper.
Popularity amongst the Masses
The charcuterie was a mainstay of every shopping street throughout medieval France with a vast and intricate range of cured meats, sausages and meat loaves on offer. The medieval charcuterie was owned and manned by the charcutier who not only possessed advanced cooking skills, producing moist and perfectly seasoned meat products, also had the lightness of touch to ensure they looks presentable and attractive to the customer. The charcuterie was extremely popular amongst the French and the most creative charcutiers could attract customers back again and again with new and wonderful creations.
Change and Conflict
Towards the end of the 15th century, the charcuterie business was hit by a blow from the government. With food related diseases and death reaching epidemic levels, new laws decreed that a strict separation must be maintained between the slaughterhouses and the meat markets. This meant the charcutiers no longer had direct access to raw meat to complete their intricate curing process and they were at the mercy of the suppliers to provide products. Obviously, the more links are added to the chain, the more costs are increased and charcutiers had managed their costs by being able to keep their own animals and slaughtering facilities in house previously.
The effect is had on the charcuterie business was vast, to the extent that the government slowly made allowances and eventually by the 17th century charcutiers were again allowed to slaughter their own animals for processing.
Growth and Expansion
From then on, charcuterie became more and more creative and spread over a wider area, with charcutiers traveling and sharing their skills. In time, Frankfurt in Germany became a leading processor of charcuterie meats with the production of the Frankfurter and similar products were seen in the production bologna sausage (Baloney) and Genoa Salami in Italy.
It wasn’t long before techniques made their way across to the United States and the process was even further refined. Now, you can find charcuterie products on the shelf of any supermarket or shop, although those sold in specialist delis are of course, of better quality. One of the classic books on the subject came from the States, with Charcuterie: the Craft of Salting, Smoking and Curing by Ruhlman and Polcyn selling out in many branches of Barnes & Noble because it was that popular. Finding a straightforward, easy read guide on the subject can be difficult because it is such an in depth process.
The Processes involved
The processes involved in charcuteries are far more developed than they were back in 15th century France. However, there are some fundamental basic processes that can be used when preserving and curing meat:
Dry Salting – adding dry or rock salt to the meat to cure it in the most typical and traditional way
Brining – adding the meat so it is submerged to a saline and brine solution
Equalising – After salting/bringing hanging the cured meat to ensure even dispersal
Maturing and Drying – whilst the meat is hanging it is left to mature and dry, with any moisture and salt able to evaporate. This process is key to charcuterie as its in this stage that the enzyme activity occurs which kick starts fermentation producing the distinctive taste of the particular meat and also extending its shelf life.
Of course these are very basic entry level processes and a veteran charcutier or these days, a highly qualified chef, will add many more processes including smoking which add a further distinctive flavour to the meat.
Charcuterie is an ancient culinary art with its roots based in a need to preserve food and its future very much in providing creative and original food combinations. Not as popular as it once was, charcuterie products and the advanced process behind them should be championed for their creativity and flavourful taste.
----
Jenny Gardiner is a London-based freelance writer.  She has a love for food and one day would love to open her own delicatessen.

Posted by Elliot and Sandra at 6:37 PM

To the anonymous comment that arrived as a no reply email
We're glad you like it so much.
Cheers