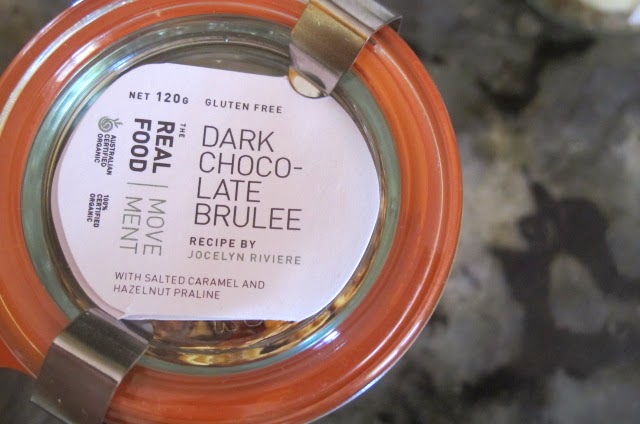 To stimulate interest TripAdvisor or Zagat or other foodie sites occasionally list things like the 10 best restaurants, pizza houses, hamburger joints or whatever. One that sometimes comes up is the 10 most unusual restaurants. This one would be a candidate in my book.
There is so much to say about this place/idea that I don't know where to start. It is a most unusual concept. Effectively a cafe/restaurant without a kitchen, not even a microwave. but they do have a steam oven It's just for reheating, not for cooking. I don't think they have coffee either but they certainly have unusual tea or more rightly tisanes. It was no surprise that it is cash only.

They are not licenced nor do they have BYO. They don't even have bread and butter!
I think it started as the brain child of Mellisa Tal. At that time, about three years ago, the mother of a two year old with a desire to bring affordable organic food to the public. Real Food Movement is the result. Just south of Hgh St, it is easily overlooked.
The shingle doesn't have a name on it, or an image. It's just a bunch of branches and leaves. 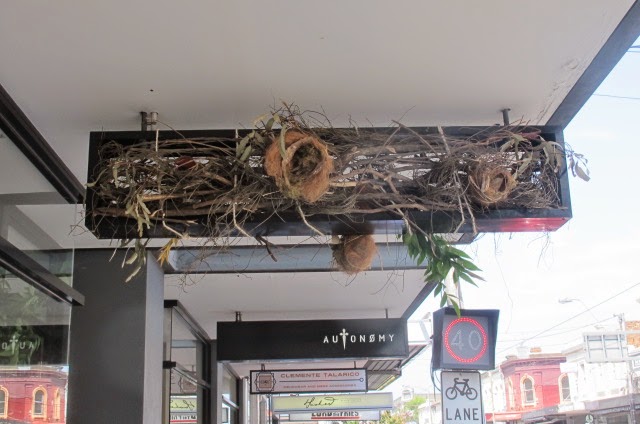 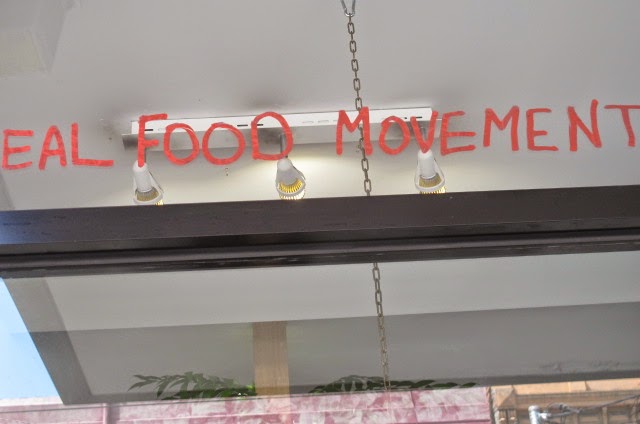 They also have a screed about their philosophy on the window 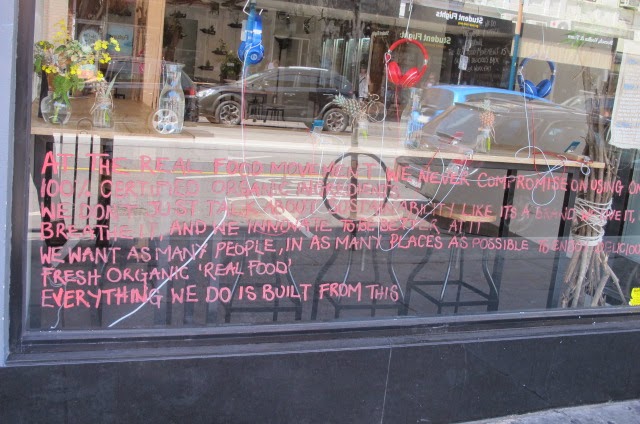 and there is a menu stuck on it too. 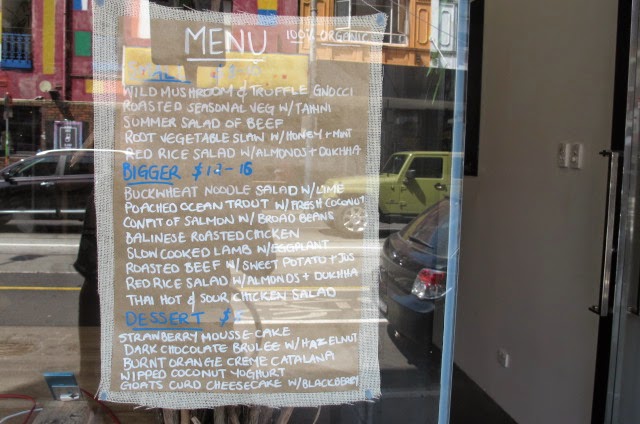 Looking in one sees a bench top with ear phones hanging at intervals. These are set up to play meditation music, a different kind of muzak which you can take or leave. The decor is odd. A swing hangs on one side of the room. 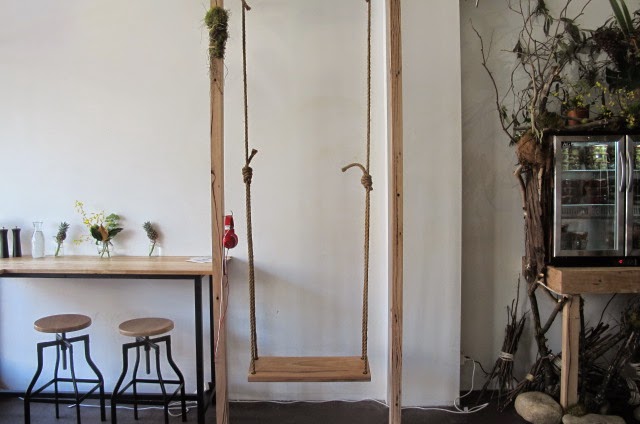 There are temperature controlled cabinets all around with the food they serve in glass bottles sealed with clips. 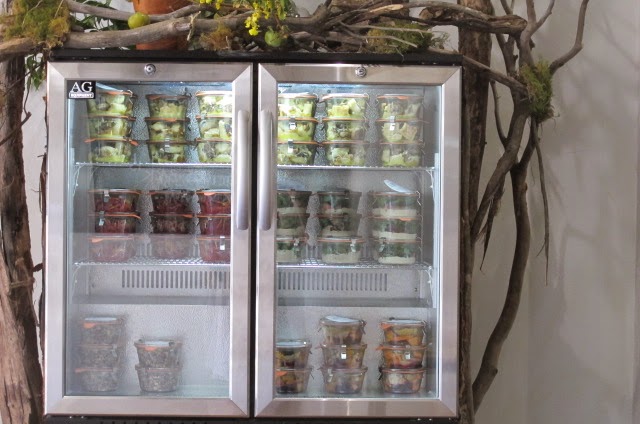 Whatever decoration there is is more branches and leaves. The back wall has cleverly hung plastic bottles with herbs growing from them. 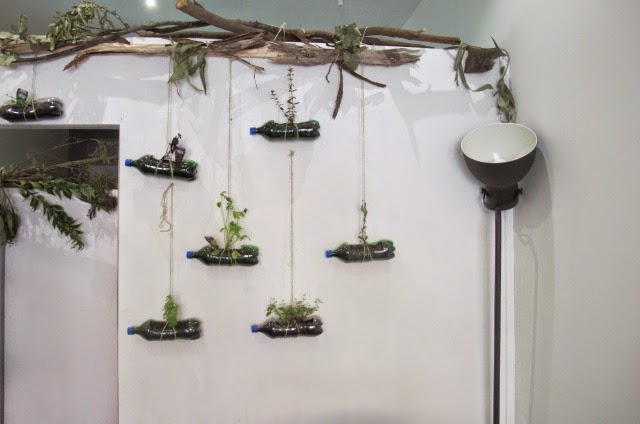 There is a central table, which is bare wood and that's about it. Evidently most of their business is take away. Patrons reheat the food in their own microwave ovens. Apart from their labels there is also nutritional information wit each item.
I had a serve of slow cooked lamb cheek with goats cheese and eggplant ($15) which took 5 minutes to warm in the steam oven and was DELICIOUS 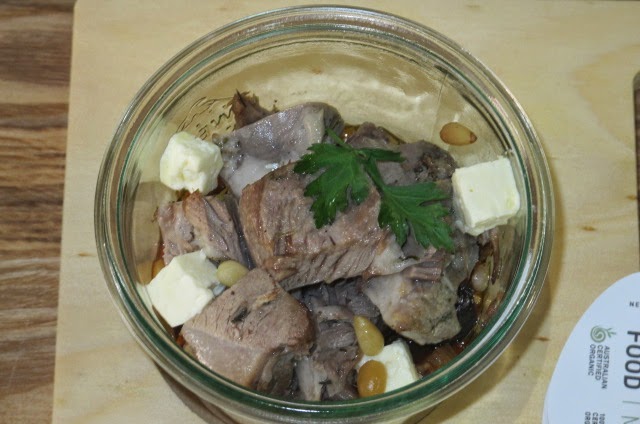 and hey gave me a nice box to take home a couple of desserts. 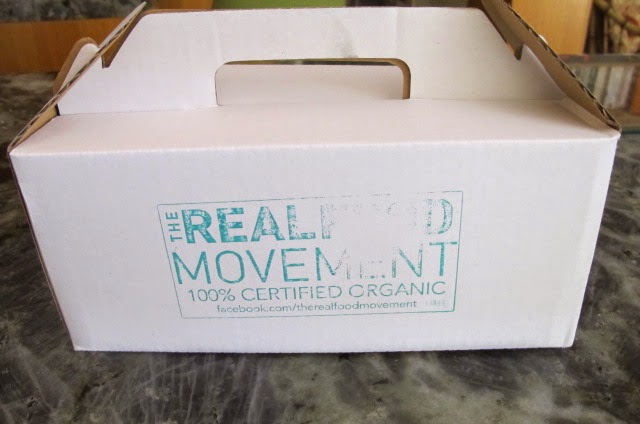 took home a couple of desserts. If you return the bottles they give you 50 cents refund off your next purchase.
The desserts were a superb Chocolate cream with crunchy nuts called dark chocolate brulee and a goats cheese creation which was too dry and too sour for my taste. 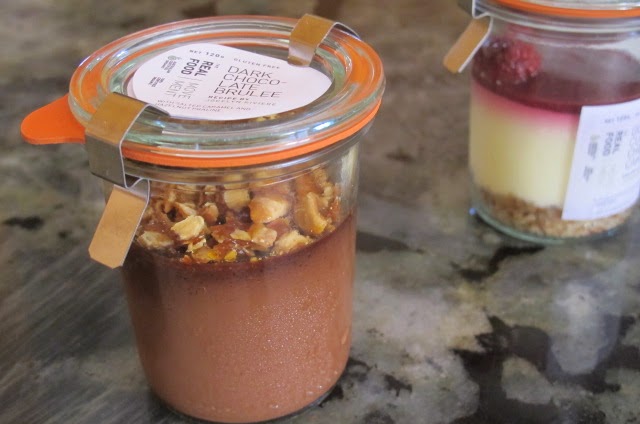 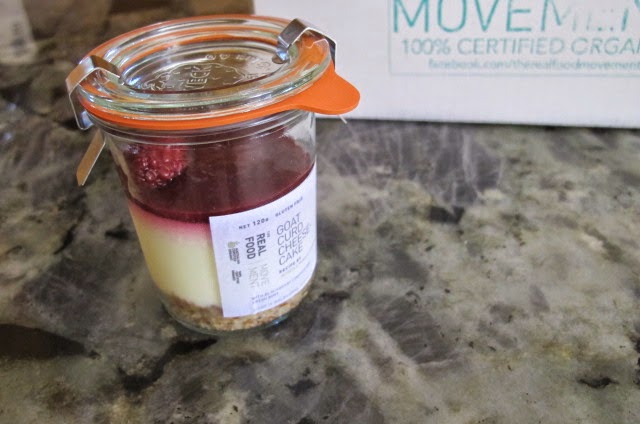