Introduction: Their banner proclaims they make the best pies!
Ambience: A sort of pub style indoor/outdoor place in an huge old mansion fairly typical of touristy country towns with a wine tasting area attached.
Service: Don't come for the service. It is friendly and helpful but very unprofessional They were apologetic when I pointed out we had three knives and one fork for the two of us they helpfully brought two more forks. They said it was against health regulations to serve tap water, there sad lack of salt and pepper shakers
Food: Sea perch fillet in light beer batter with thick crisp chips and salad was a huge and very good dish and the beef pie with mushroom filled with chunks of meat worthy of the acclaim.
Wine: Naturally they sell their own - not to my taste but very inexpensive
Price: Less than you'd expect $40 for two
Score: 13/20

Posted by Elliot and Sandra at 6:21 PM 2 comments:

Introduction: This multiaward winning (best Chinese restaurant in Australia 2003, best in Qld and so on) is one of a bevy of restaurants at Conrads, Jupitor Casino at Broadbeach
Ambience: This clearly sophisticated venue is only a little diminished by the racket emanating from the piano bar next door
Service: Very attentive
Food: An almost fat free crispy skin duck was a little tough but beautifully spiced. Sweet and sour battered pork fillets with peppers , pineapple and onion, a classical dish, had a excellent sauce - not too thick nor too acid nor too sweet. We only had two dishes!
Wine: Expensive limited list. A modest range by the glass at about $10
Price:Range is from modest to fearsome eg Lobster $201/kgm, Coral trout $191/kgm, Abalone similar. Soups range from about $9 to $178 however a reasonable meal could run out at about $90 for two courses for two
Comments: Somewhat mystified by the odd prices. I very much enjoyed my meal here.
Score: 16/20

Posted by Elliot and Sandra at 9:24 AM No comments:

Introduction:This Gold Coast (Labrador) sister of a Sydney restaurant of the same name claims to have the freshest of lobsters and half price lunches, not including lobsters tho, every day.
Ambience: Another typical waters edge informal eatery
Service: Efficient
Food: The entrees of scallops, Moreton Bay bugs and BBQ octopus were all very good size and very tasty dishes. Lobster Thermidor ($59) could have passed for Mornay! however the lobster itself was excellent.
The Creme Brullee with ice cream was very acceptable.
Wine: BYO at dinner only! A small list reasonably priced
Price: $60 will buy you an excellent lunch
Comments: Excellent products reasonably presented. Nothing fancy
though.
Score: 13.5/20

Introduction: Every person I spoke tp recommended this place as rhe absolute best sea food restaurant on the Gold Coast
Ambience: Great site on the waters edge at Marina Mirage, informal feeling with well appointed and well spaced tables
Service: Keen to please tho it took a considerable time a simple request for bread to be delivered
Food: Mussels in a red wine sauce were huge, delicately prepared and could not have been better. Top marks. Whiting fillets in light beer batter were about as good as you can expect from fish and chips. The lobster Mornay ($99) served on a massive bed of somewhat dry fried rice, with a large handfull of parsley plumped on the middle of the dish was tender sweet and obviously very very fresh. That it lacked in presentation wa unfortunate but there could be no complaints about the lobster
Wine: Inexpensive modest range
Price: Modest by Melbourne standards about $80 for 2 if you avoid the lobster
Comments: Despite the heaps of awards this restaurant has won there is still room for a lot of improvement
Score: 14.5/20

Posted by Elliot and Sandra at 7:49 PM No comments: 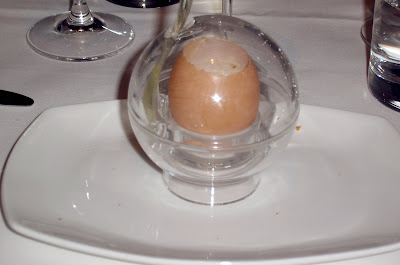 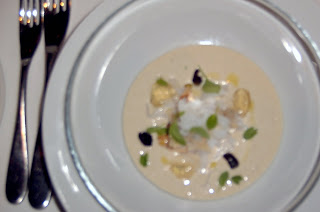 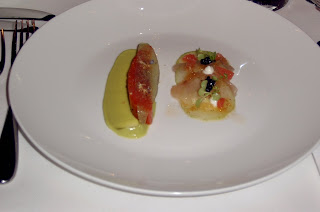 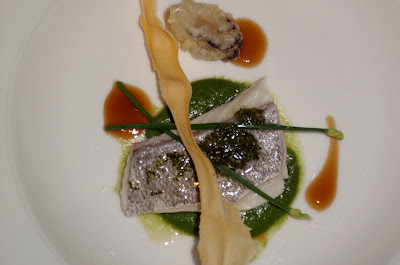 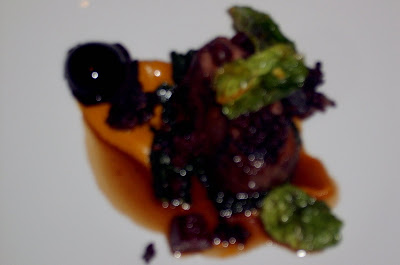 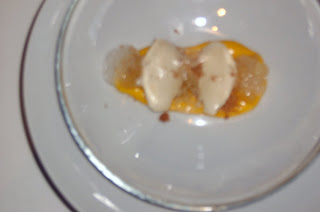 Posted by Elliot and Sandra at 10:07 PM No comments:

Introduction: Fusion food - Japanese modern at 34 Jackson St, Toorak
Ambience: A plethora of young Japanese waiters and plain setting give Orita's a distinctly Japanese feel
Service: Confused and error prone. The manager did well acknowledging. apologising and doing a reasonable job of repairing the errors
Food: I had the Signature Omakase (Degustation) Menu ($68) upgraded from the fish to to the Lobster main course ($97). The half lobster tail came from a very small lobster and was not quite as good as I'd hoped a little dry and hard. All the other dishes were excellent. Beautifully presented and tasty. The marinated salmon, topped by a small ring of onion containing a colourful delicate edible flower was enhanced when combined with the light vinagrette lettuce. The stewed beef spare rib with a fine potato salad was very good as was the delicate sushi. Perhaps the best was the small cup of carrot soup- I have no idea how they did it but it was devine.
The crispy garlic fried rice was very acceptable and the dessert, a peanut mousse was interesting but not outstanding. Of the other dishes we tried the tempura was unsurpassable, there was a a Japanese prawn rice, a bit like a porridge, well worth trying. The pigeon, which turned out to be half a pigeon ($30) was extremely tasty but rather a small serve. Other desserts- mint chocolate mousse and the tempura icecream were not notable.
Wine: We drank some basic cocktails - G&T cheap at $6 and Mt Adam Pinot Noir (60) which I found indifferent. You can bring your own.
Price: Around $90/ head
Comments: After closing for 6 months for refurbishment there is little change to see in the main body of the restaurant. The food is as good as ever. Chef Hikaru Orita is innovative and interesting. If I gave out hats he'd get one
Score: 15.5/20

Posted by Elliot and Sandra at 10:57 AM No comments:


Introduction: Recently elevated to one hat by the Age Good Food Guide this South Yarra restaurant deserves to thrive
Ambience: Walls decorated with a couple of Ala Wolf-Tasker's striking works, and some pleasant still life works (for sale), provide a comfortable environment
Service: Very attentive
Food: Michael Bacash's signature entree Garfish and prawn Nori rolls ($19) stuffed with prawn salmon, King prawns and garfish, the head and tail of which decorate the dish, is outstanding with most delicate flavour imparted by the careful addition of ginger, garlic and coriander. The roast pumpkin and goat cheese Agnolotti ($15) are much stronger but also exellently flavoured with sage and a rich garlic brown butter. Mains: The grain fed Filet Mignon ($35) seved as ordered, very rare, was tender and extremely tasty with its port wine juice served with mushroom, onion and potato Dauphin (incorporating cheese). The fish of the day, founder, was surprisingly succulent A handsome bowl of fries and a garden salad completed the meal.
Wine: An adequate list by the glass or bottle but clearly not their specialty
Price: At the upper end of prices but, in my view, worth a visit
Comments: I have no hesitation in recommending Bacash for a very good dinner. A revisit did not quite live up to expectations.The two tiny stuffed Zuchini flowers were disgracefully expensive at $17. The spaghettii Marinara ordinary. The pork belly also a small serve very nice as was the sweatbread entree. The home made icecream less than ordinary but the sticky date souffle really excellent. A patchy dinner - only 15/20!
Score: 16/20

Posted by Elliot and Sandra at 12:45 PM No comments: