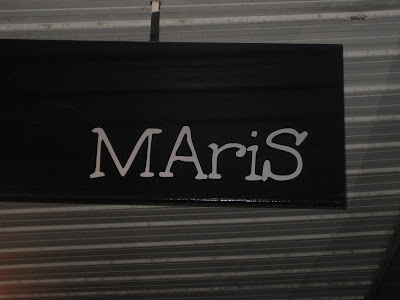 Right at the start of Glenferrie Rd. at the Dandenong Rd end (no.15) is a surprising little restaurant. I was disappointed 18 months ago but it continues to get good reviews so we tried it again and I'm glad we did. The decor is unchanged. A wooden rocking horse in the front window, white artificial marble topped bare tables with chicken themed straw bread baskets - quite a homely feeling about it.
Before anything house made very crunchy bread was served with an olive and anchovy paste and an lovely amuse bouche of tomato jelly with a light foam was presented. 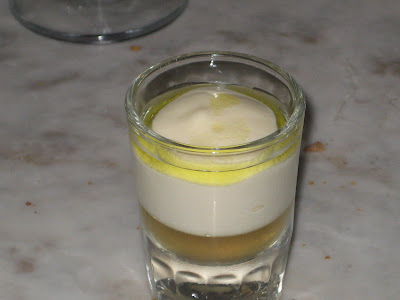 We started with two soups - the crab consomme, with abalone, celeriac and tarragon, ($17) was tasty and well seasoned, the Jerusalem artichoke soup, an unusual offering, served with lots of goodies including a soft poached egg and black pudding, ($17) really excellent full of taste. 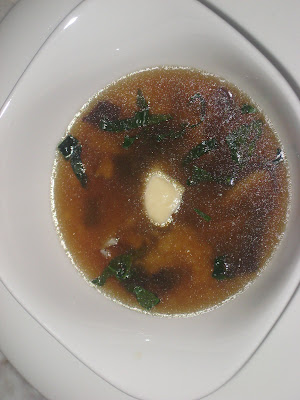 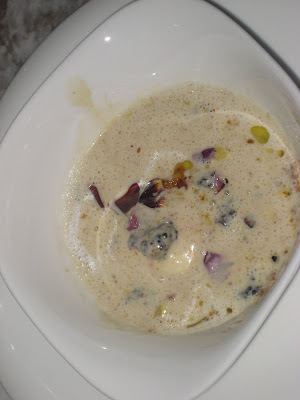 For mains the gnocchi were unusually soft and very bland. They were mixed with duck meat and outstanding duck liver and celery salad ($24) 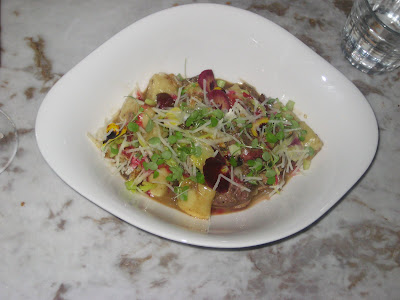 I would have preferred a firmer texture.
The smoked free range suckling pork belly was super. Served with a rather minimal smokey potato cream and pickled vegetables ($33) 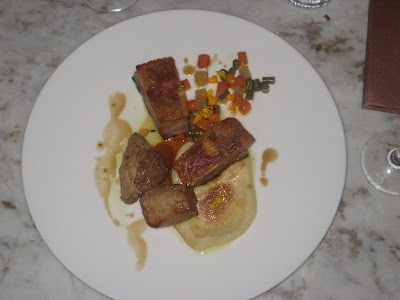 Very tender with a light smokey taste and aroma rising from the plate it was delicious. On another occasion we tried a couple of other dishes. An entree of grilled quail with fine barely, soft duck egg and shimeji mushrooms ($17) 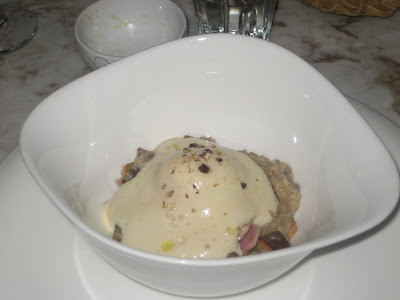 was hard to identify from its presentation. The quail had been completely boned making it an easy dish to enjoy but the taste was extremely mild and modified by its accompaniments. A poached quince amuse 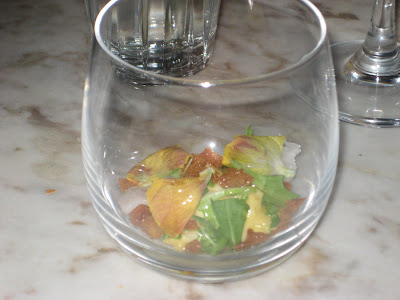 before the main was very pleasant. We then enjoyed a slender fillet of King George whiting with braised rice, chorizo and cuttlefish with a light mussel sauce, 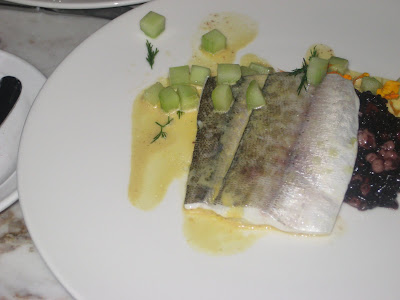 a very delicate dish ($33), and a good example of slow cooked beef with swiss chard, fregola, radichio and blood orange. ($32) 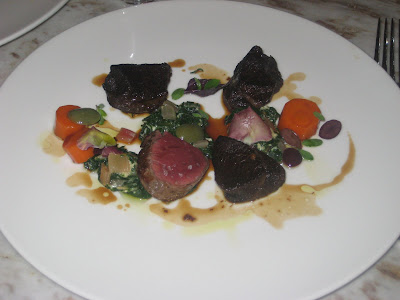 This was so tender one would hardly need teeth to enjoy it and tasted great too. A serve of fried organic potatoes ($8) 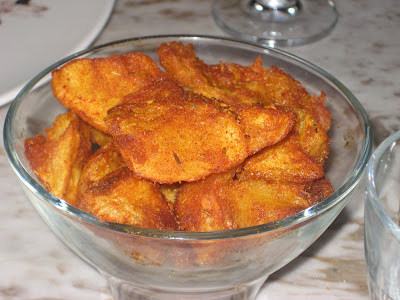 was also much appreciated. Another palate cleanser appeared before the cheese. 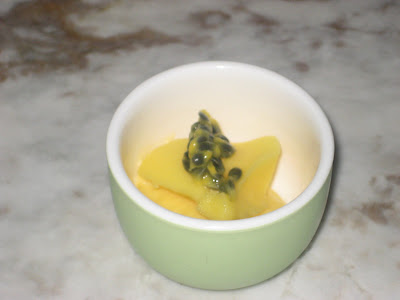 We shared a plate ($25) of French and Italian cheeses. 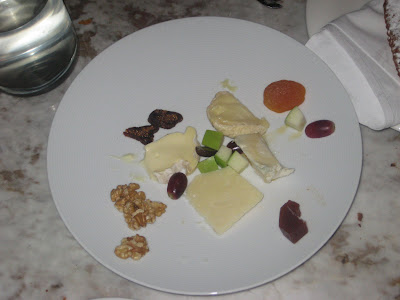 Good size and good variety, one goats milk, one sheep and two cows milk but I could have done without the peccorino which I prefer grated on pasta.
Unfortunately the dessert, panacotta, with macerated figs and apricots with almond biscuit ice cream 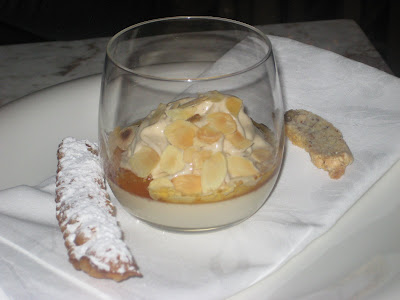 softened and more or less melted before we got to eating it.
Prosecco still at $9 a glass was a pleasant accompaniment.
I think the dearest item on the menu is $33 and we ended up paying about $145 before the gratuity. It defies my imagination to come up with the answer to the question How do restaurants set their prices. Why is this dish $17 and that one $18 or $32 or $33 or whatever. I would be pleased to be enlightened.
Score: 15/20
Posted by Elliot and Sandra at 8:58 AM 3 comments: 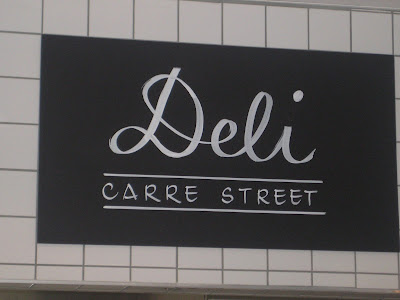 This little gourmet deli around the corner from Glenhuntly Rd serves a small range of sandwiches and light meals. A constant stream of Deli customers keep the staff very busy and their four tables are constantly occupied. The walls are lined with gourmet pastas, fancy spices and virgin olive oils, 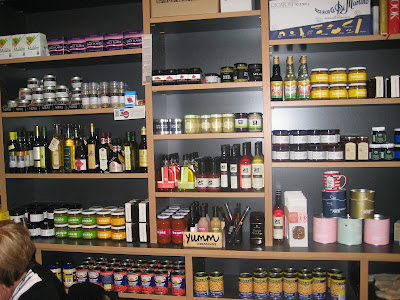 It's not Simon Johnson but they do have some very nice looking cheese. A blackboard serves as the menu 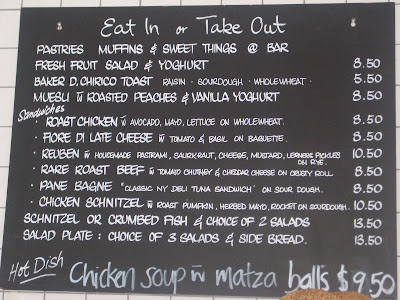 and the prices are very reasonable. We enjoyed a pastrami sandwich between two toasted slices of rye 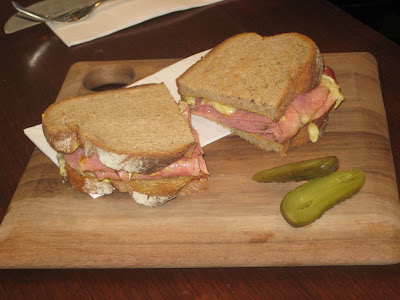 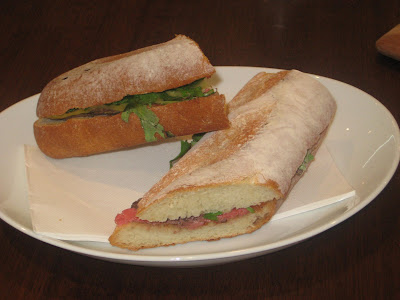 The chicken soup looked fantastic - next time. There will be a next time!
Worth a visit for the Glenhuntly Rd brigade.

Posted by Elliot and Sandra at 11:12 PM No comments:

For ethnic cuisine are there particular dishes which mark the excellent chef from the very good, the good and the just plain ordinary?
To some degree I think there are such dishes. I think for Chinese sweet and sour prawns in batter is a good example. To retain any crispness the sauce has to be added only a moment before the dish is served The proportions and size of the accompanying pieces onion, pineapple and peppers and the proportion of them to the prawns is important as is the amount they have been cooked. Getting the sauce right is crucial it has to be not to thin nor to gluggy or gluey, not to sweet nor to sour and, obviously, served at an appropriate temperature.
For a French restaurant perhaps French onion soup is a pretty good test. Every element can be out of proportion or the onion can be over caramelised. There area lot of things that have to be just right. I have had so many bad creme brulees and other custard, so many bad attempts at mousses, failed self saucing cakes I think there is probably a dessert which is a true test of a chef. Can a single dish distinguish a Greek chef, a Lebanese a Japanese or any of the other myriad of cooking styles?

Posted by Elliot and Sandra at 1:23 PM No comments: 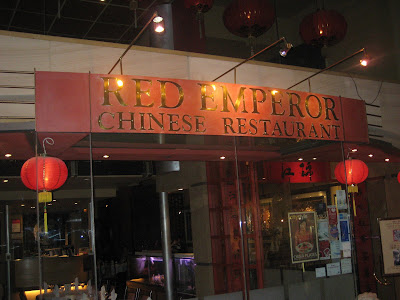 This restaurant on two floors on the upper level of Southbank, with a view over the yarra, has been an institution of fine Chinese cuisine for over a decade and features regularly in the AGF. Two hats five years ago and one for the last few years. It was highly regarded both for the a la carte menu and the daily yum cha was among the best. 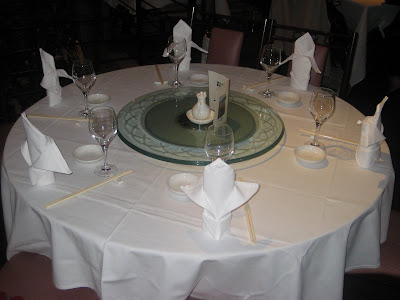 We have not been for just over four years now after a disappointing yum cha. This time we went in the evening for a meal. We started with some mixed dim sum 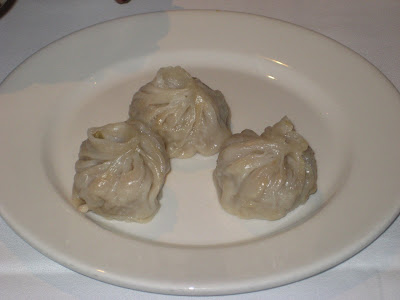 and a serve of pork dumplings 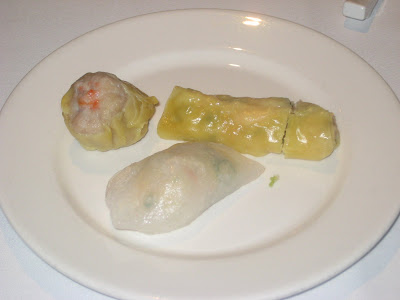 ($9 for three) I was surprised at how very ordinary they were. Quite small, firm, hard really, and lacking in taste. There was no moisture at all in the pork dumplings. Delicate and quite tasty prawn stuffed scallops, eight of them, 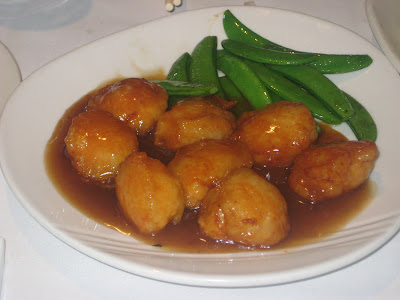 served in a to heavy sauce with green peas was a fair start to the meal. Pleasant but not very special. A serve of sweet and sour prawns, another eight!, 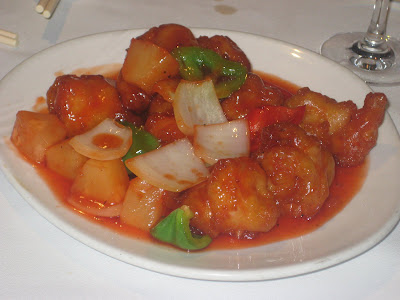 would have not been out of place at any suburban Chinese take away. They were soggy and the sauce was sweet but not at all sour.This we followed with a plate of mixed Chinese vegetables, 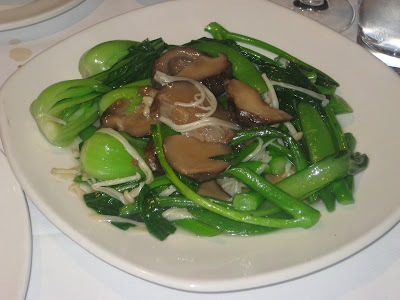 almost totally lacking in taste. It did look good though! My disappointment was palpable.The restaurant is looking tired 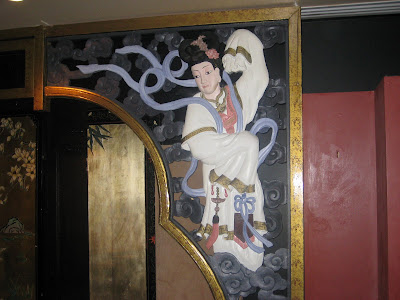 and the Cantonese style cuisine has slipped badly. Prices are a little above the average but wines are exceptionally cheap. There is a modest range by the glass from as little as $4.50 for a house red but averaging around $9. Cocktails are $11 We ended up paying $67 per person for entree and main, rice and wine but no dessert.
Comments: Now only of historical interest for me
Score:12.5 /20
Posted by Elliot and Sandra at 12:03 PM 1 comment: