Unfortunately My Flame is about to flicker out to be replaced with a Thai restaurant. The decor was dull, with a few indifferent indigenous art works 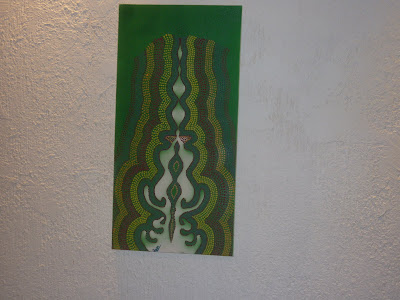 and a basin for the orthodox 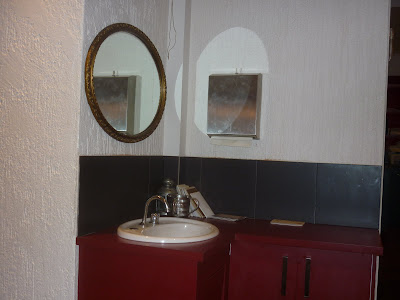 but the food was lovely and the service enthusiastic. As the best Kosher restaurant around the Melbourne suburbs this is a pity. We had a very satisfying dinner there last Sunday. They put on a $55/head Moroccan influenced set menu that I’d be happy with at any of the starred restaurants in the AGF. Flavours were delicate, interesting and blended well with the main ingredient. There was plenty to eat too. Here are some pic’s of the dishes. 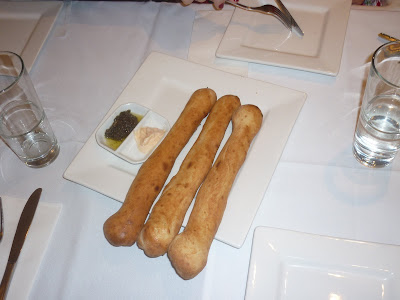 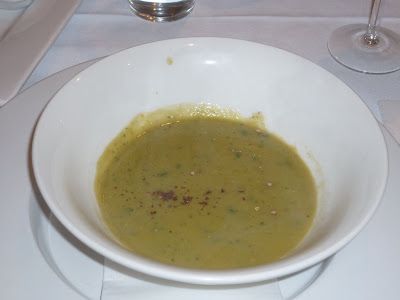 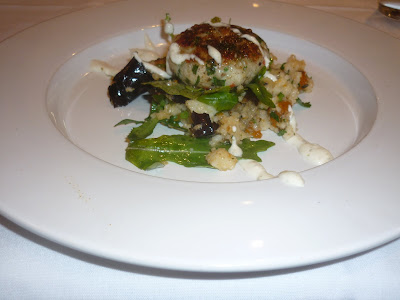 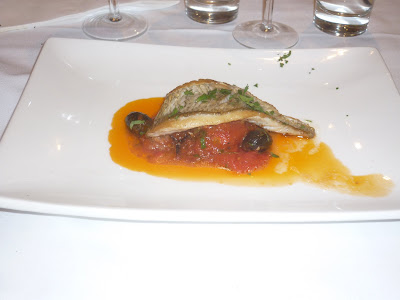 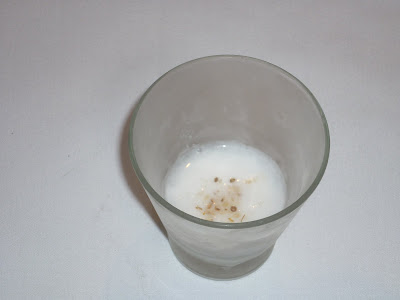 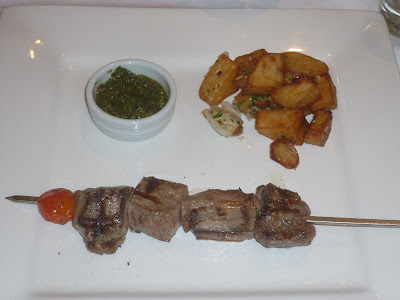 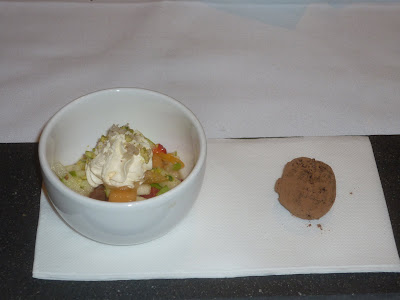 Posted by Elliot and Sandra at 3:21 PM 5 comments:

As soon as we opened the door to the staircase leading up to this first floor restaurant we were hit by a wave of noise and it was only a quarter past seven! Whilst, no doubt, this meant that everyone was having fun I considered it a very mixed sign. I need not have worried. It is quite noisy but we managed to hear and talk comfortably through the night.

They offer an a la carte menu or a $75 banquet of dishes to share. We always like to have as much variety as possible so the banquet was the way we chose to go. It began with bread, ducka, a tomato tasting powder and olive oil followed by a small cup of Moroccan soup. 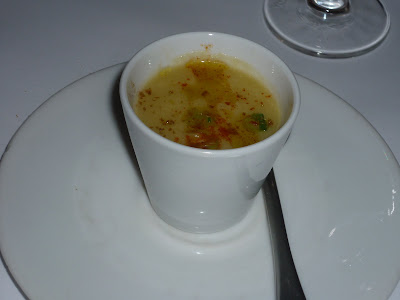 Thick and creamy in texture it was very rich with a light cumin flavour. The head chef, Pierre, was born in Algeria and trained in France and the French influence was evident in this soup. After a short pause, in quick succession, the main dishes were brought to the table. It took only a few moments for the table to be filled to overflowing as dish after dish and tagine 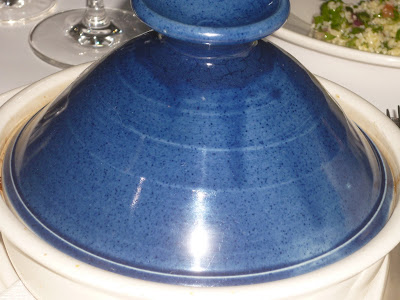 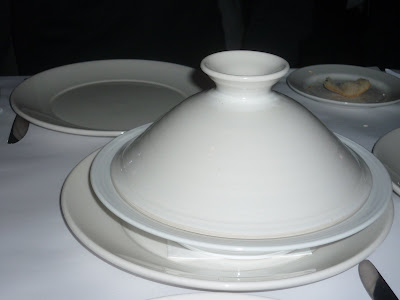 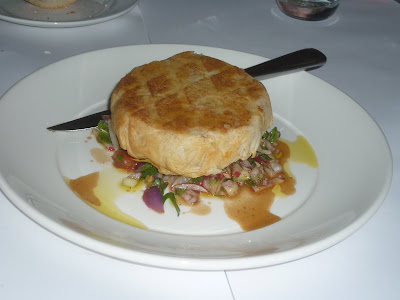 after which there was no order as everything was on the table. Several fish dishes were the least impressive. Baked whole snapper filleted with preserved with lemon, paprika and olives did not appeal to me but the goat tagine with quince gruyere and Cinnamon Bourek 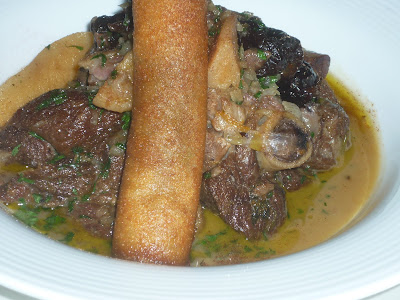 was superb, tender and tasty, accompanied by some marrow it was the best I've ever eaten. Not far behind were the lamb tagine with ginger, peas, broad beans and mint. 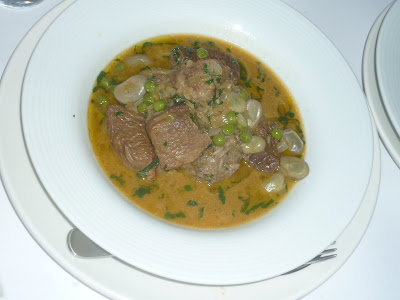 Two other sea food dishes, that we both liked better were Moroccan seafood tagine 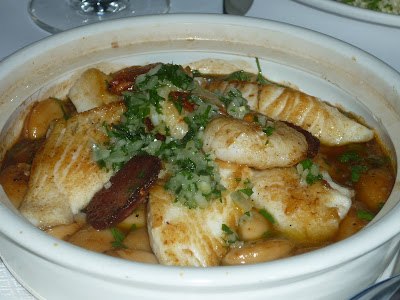 and Sardine fritters with tomato and chermoula.There were also a variety of side dishes including taboule, Algerian salad, spiced potato and mint 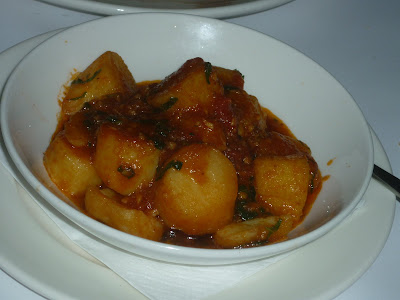 and several more dishes that are all gently and tastefully spiced giving balance without offense. A meal prepared by a talented chef that everyone can find plenty to please with both vegetarian and meat dishes aplenty 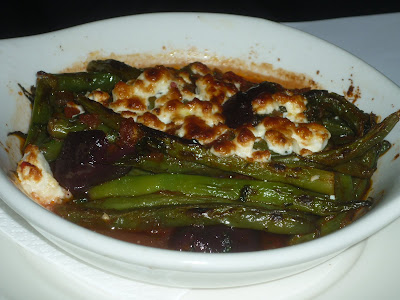 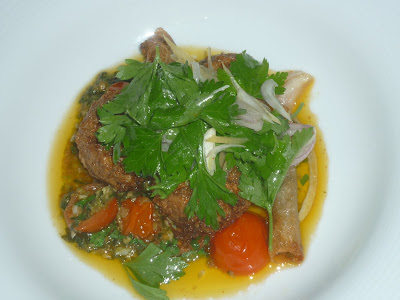 Finally the dessert. This was quite nice, very sweet and quite an Arabic/Nth African collection but after this huge meal I could have done without it! 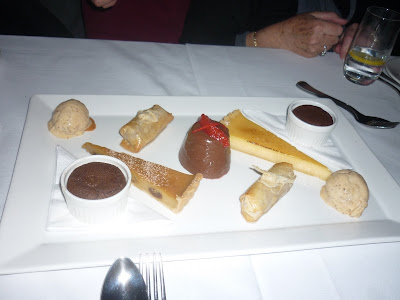