Of course I'm biased but so is everyone else. That gastronomic bible of culinary standards, The Age Good Food Guide, demoted VdM from three to two hats in their latest (2018) edition. How the mighty have fallen, or have they.
As readers would know, in the past, I have had almost endless admiration for what Shannon has done for restaurant cooking in Australia. See http://1001dinners.blogspot.com.au/2015/07/vue-de-monde-melbourne-cbd-052015.html
https://1001dinners.blogspot.com.au/2015/01/vue-de-monde-melbourne-cbd-nye-2014.html and
http://1001dinners.blogspot.com.au/2009/11/vue-de-monde-melbourne-1109.html and many reviews between all these.
Through his restaurants, but particularly VdM he has been at the forefront of modern trends in cooking. Furthermore he has done it with style. He has trained chefs who, working with and for him, have continued to innovate in the tradition of local, fresh, organic foods. He is environmentally conscious - the water bottles 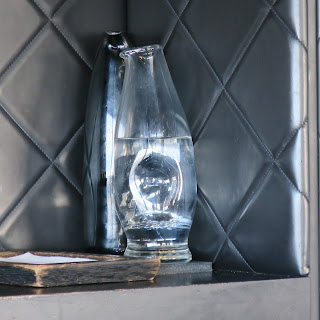 are made from used wine, and other bottles.

The glassware for wine is superb and enhances the pleasure of its contents. Has it all slipped down hill while competitors have improved so much that he has been left behind? We had to come back to see for ourselves.
The venue is superb. Wait staff are abundant, and unfailingly courteous and helpful and service is well paced. We were fortunate to have the Chef's table, with a clear view of the team plating dishes, 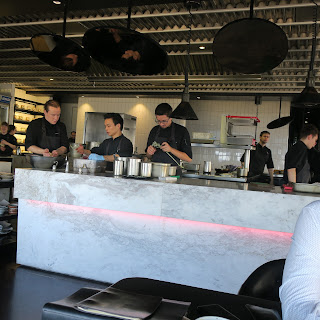 and as usual, chose the Chef's Tasting Menu.
It began with an eggplant with eucalyptus, wattle seed pollen dip 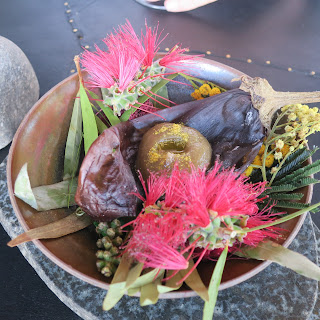 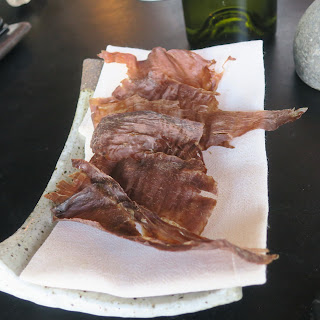 The girls preferred not to eat emu and were offered salt and vinegar chips.
The presentation was attractive for this gentle start to the meal.
Raw Flinders Island lamb with spring peas, finger lime and lemon myrtle came next.

For whatever reason one doesn't think of serving up raw lamb. This was totally delicious.
Paperback smoked green asparagus from Jonella farm with seaweed and 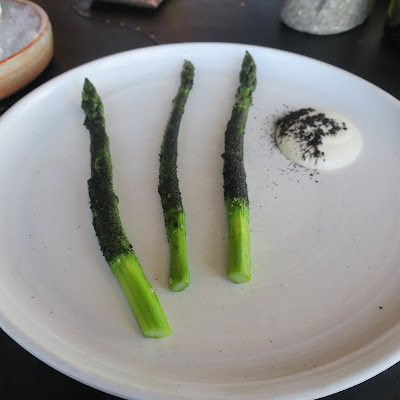 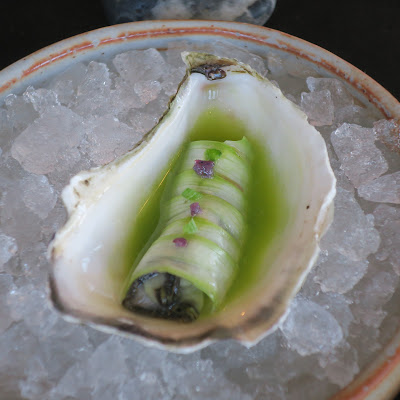 was a great way to enjoy oysters.
Port Philip Bay scallops with blue lip mussels, spring shoots and flowers showed these mussels at their very best. 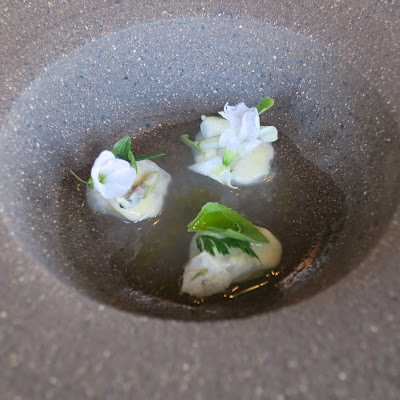 Full of taste with none of the toughness I normally associate with them, in  a taste of the sea soupy sauce, and who doesn't love scallops.
Schultz dairy milk curd with broad beans, rosella flowers and lilly (sic) pilies. 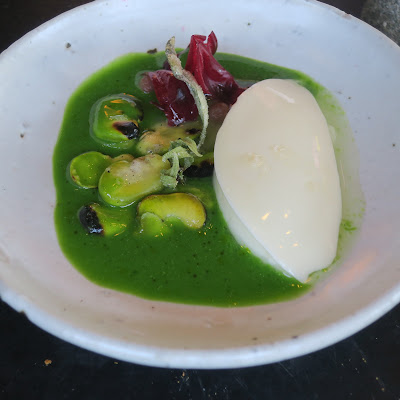 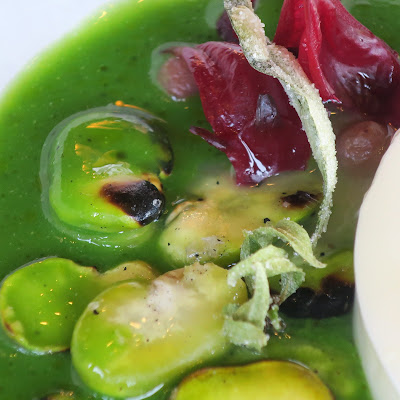 This was a rather plain vegetarian dish, beautifully presented but, for me, without much character.
Mudcrab with pickled kohlrabi, marigold and squid ink and tarragon emulsion.

This comes in the form of a sea food sausage on a BBQ so you can make your own sea food hot dog. Back on track. I'm impressed with what Chef Justin James has done with kohlrabi, including his kohlrabi fettucini.
Damper but not damper. 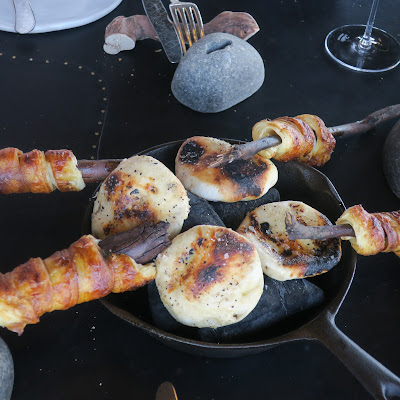 Bread is dangerous. It's so moorish that I have to be careful not to eat too much of it so as to be able to enjoy the meal. This flat bread and a slightly sweet bread wrapped around a stick, presented on a bed of coals, reminiscent of a boy scout campfire,  was an innovative change and not too filling.
Kingfish with smoked koji, sea herbs and dessert lime. 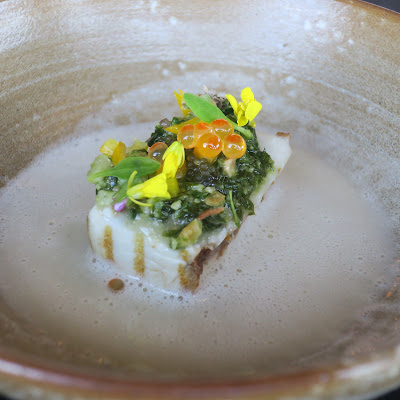 One of my favourite fish, raw or cooked it did not disappoint.
One of VdM's signature palate rejuvenators followed. Davidson plum sorbet with celery and apple which was frozen with liquid nitrogen at the table and crushed with a wooden pestle before the sorbet was added.
Leatherwood honey aged duck with cabbage and muntari beans 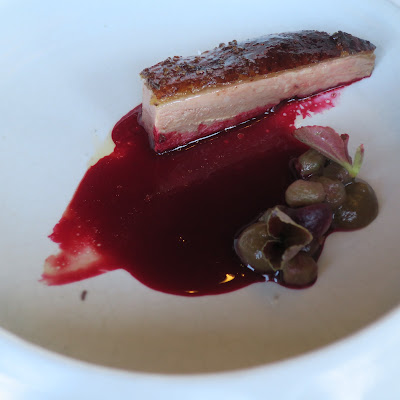 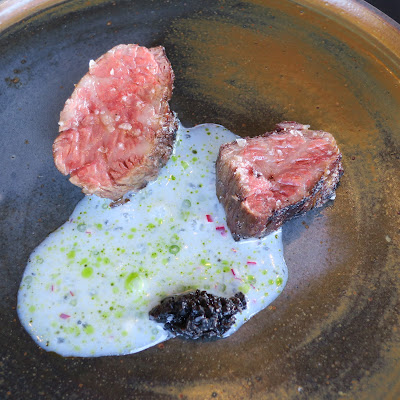 was another superlative dish although I didn't feel the truffles added much to it.
As always they have a great trolley of cheese. 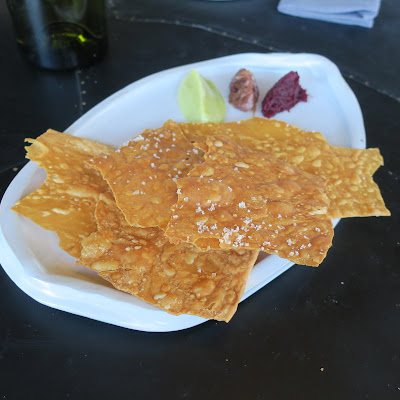 before the sweet dishes.
Two flavours of marshmellows roasted at the table was a bit of fun 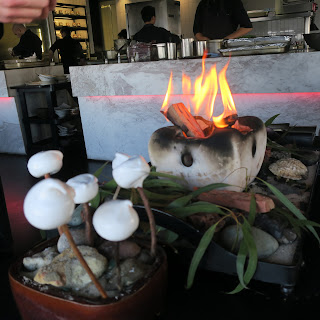 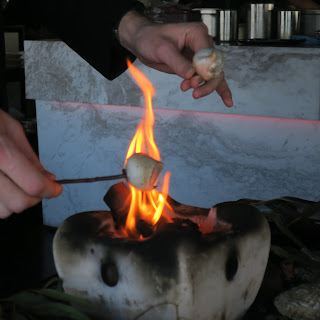 before their invariably perfect chocolate souffle. 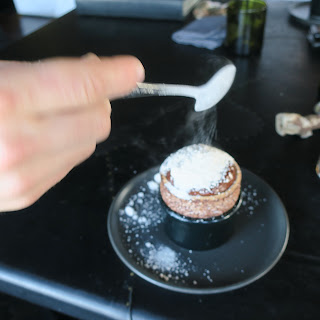 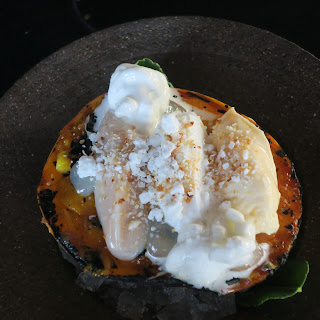 looked good but was disappointing because the mango was not quite ripe.
I was offered a replacement but had really had enough to eat by now.
The final offering was Lamingtons/Gumnuts/Watermelon and Four Pillars Gin. 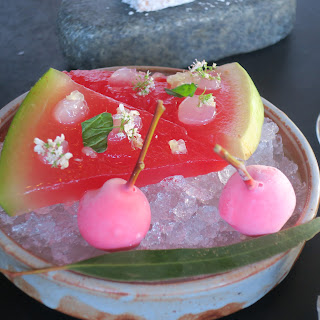 This was far from an alcohol free meal.
Someone mentioned that it was our anniversary 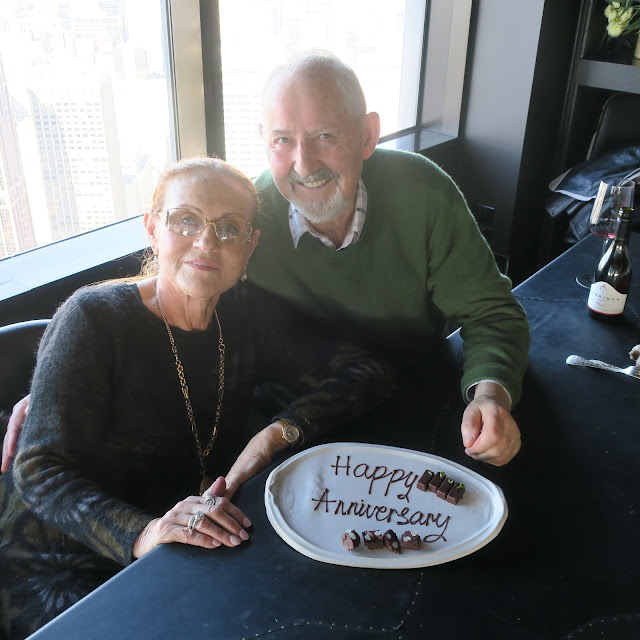 and we were given a very nice bottle of champagne at the start of the meal. 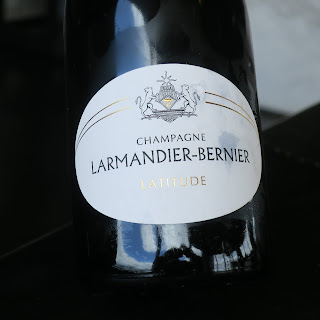 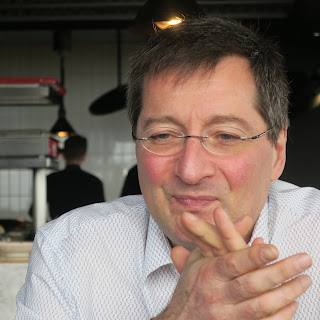 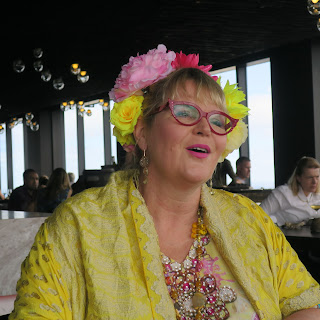 took us to this meal and they thoroughly enjoyed it too.
This was not the best meal I have eaten, even some of our meals here have been distinctly superior, as some of the references above to reviews going back to 2009 show, soon after we started this blog, but it was an extremely good meal in a great venue with excellent service, certainly in the top rank of Melbourne restaurants. Does it deserve to be demoted by The Age Good Food Guide?  I don't think so.
Sometimes you can be too successful.
Score: 17.25/20 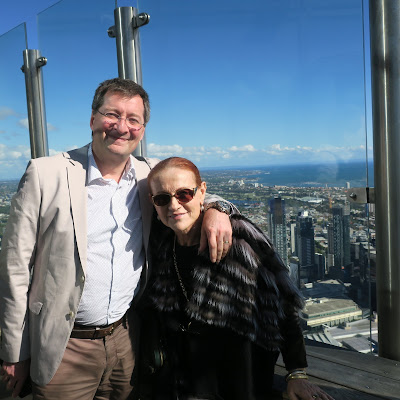 Posted by Elliot and Sandra at 3:48 PM