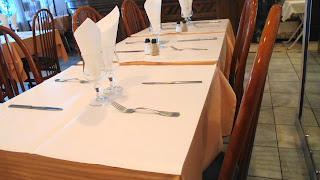 There are lots of different aspects of Paris. Although there are centres of special interest, by and large, where ever one goes there are a huge variety of shops in the majority of the cities streets. It's like an endless strip shopping centre. Often fashionable shoe shops and designer label clothes retailers are next to small shops selling wine or books or telephones or whatever. Bistros, brasseries and patisseries are rarely more than a stones throw apart. 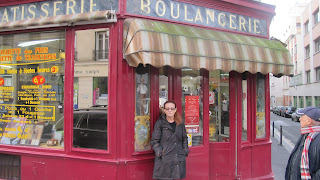 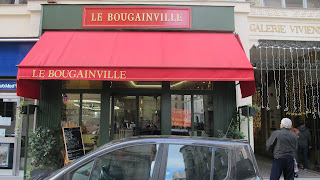 Kosher is not hard to find. 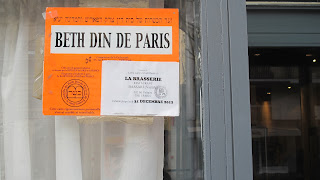 Coffee is every where, Espresso is 2 Eu but a cappuccino is from 4.5 to 7 Eu! 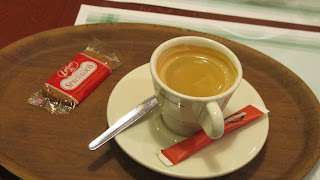 Some cafes are famous such as three in particular around the Place St. Germaine where Hemingway and French intellectuals such as Sartre and de Beauvour met to thrash out there ideas. These are Le Deux Magot, Café Lipp and Café de Fiore, famous for its red seats and art deco furnishings. For the modern patron I would think their current popularity depends on their history. Whilst there coffee and cakes are nice enough their menus are simple and very ordinary. They are crowded, tables are small and uncomfortable and  prices are high,  though not brutally. This is free enterprise and the market will bare it. Café Lipp is lit up with large neon signs out side and has its name emblazoned every where, 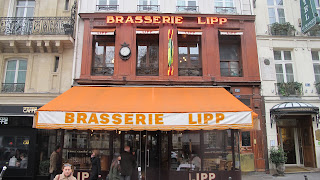 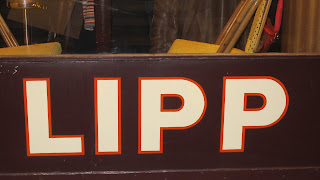 and on the doormat and the entry hearth 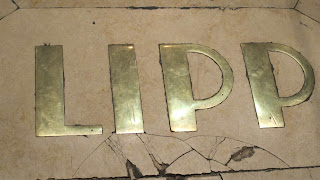 and also on its crockery and even the wrappers on the chocolates they offer with coffee. 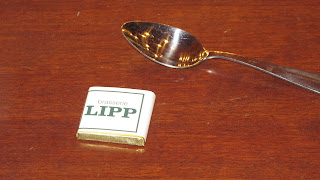 Their culinary reputation rests on sauerkraut and beer. They offer a limited lunch menu, coffee and cakes during the day with a range of wines and Alsatian beers. They extend their small range of cakes with two from the renowned patisserie Angeline  It is a lot easier to get these here than at Angeline where the queues can be 100 yards long. On the first occasion we went to Lipp we were shown the door as they were setting up for dinner and would not serve coffee without food. Subsequently we returned and tried two of Angelina’s cakes The Montblanc was magnificent, very rich and sweet the chocolate marron, which had been piped out like strands of angel hair pasta, rested on a firm sweet cream which all sat on a meringue base, presented beautifully in a small cup. We’ve not had better ever but you need to be prepared, it is immensely rich and sweet 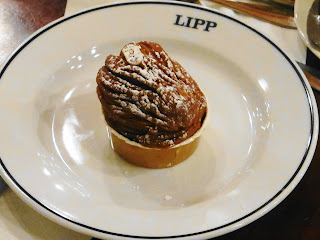 The Millefleur however was not exceptional and we have had better from a local patisserie where we are staying. 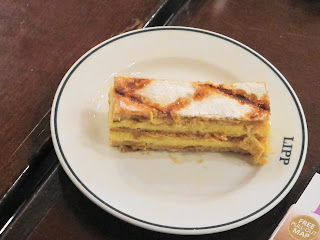 Their décor is peculiar with large mirrors and panels of attractive floral tiles interspersed with ancient signs with instructions for patrons. They have metal art deco lamps and the ceiling has some sepia tone scenes. Above the stairs there is a colourful painting of parrots. Circular stair case winds down to a very basic toilet.
Café de Fiore, whilst renowned for it’s art deco furnishings, is simpler and less jarring than Lipp. Their prices are virtually the same. I liked the lemon tart although for some it would have had too much lemon. A slice of chocolate tart could not be faulted.
Les Deux Magot was exceptionally crowded with small round  tables tightly packed so it was almost impossible to move. Around us patrons were reading travel guides, works by Jean Cocteau or simply sitting to see and be seen. I’m sure the genuine French intellectuals and literati have long gone somewhere else.  Food is unexceptional. 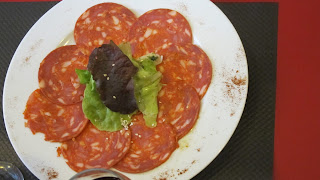 Others are fashionable, Les Papilles falls into that group. 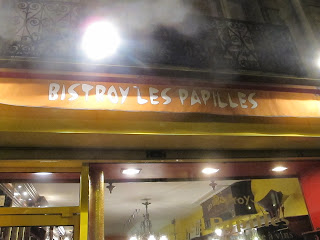 The chef works in a tiny open kitchen with his dog and cat wandering around the restaurants taking guests offering. 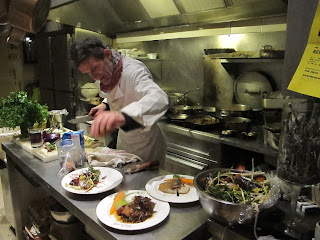 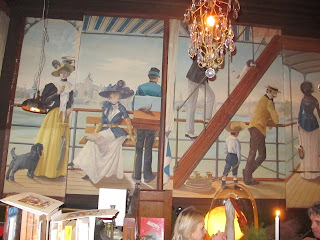 Where we stayed, in a working class area of the 11th Arrondisement, there are fewer fashion shops and more down market restaurants, Bistrot, Brasseries, and Crepperies and delicatessens of greater variety, French, Italian, Chinese or mixed Asian dominate. Of the half dozen we have tried the food has varied from indifferent, for example Shanghai Delices and Lili to reasonable like Rosmarie and Rouge Lime 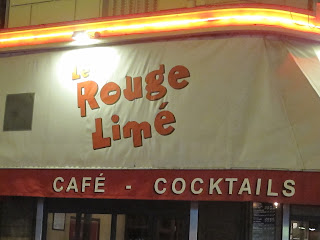 to excellent at Septime. Many offer set price lunches for about 10 to 13 Euro which equals about A$14 to A$17.50 which, by law, are advertised on a board on the footpath. Serves are generally substantial. 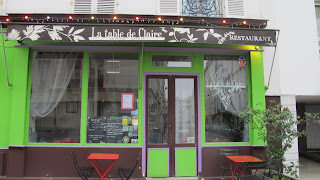 The evening menus sound most appealing but the cooking is often awful. So much so that, despite appearances, often the best part of the meal is the bread and sometimes the wine. 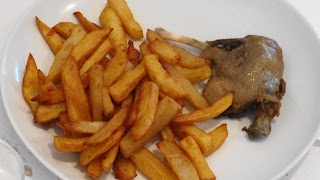 Almost raw eggs, very overcooked fish, tough meat, over strong sauces, everything is available at your local Brasserie.
There are also exceptional places. Among the most famous is Fauchon 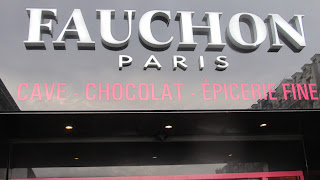 Renowned for its patisseries and chocolate they have branched out into luxury foods and have a caviar bar and a Champagne cellar. Coffee, quiches and some delicacies, for example huge Normandy snails can be eaten at some small crowded tables or taken away. 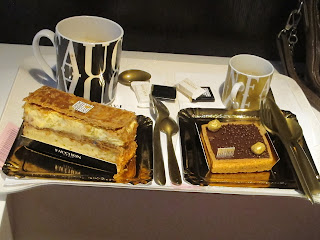 Whatever you want you can find it and, for Australians it's mostly very reasonably priced.
Posted by Elliot and Sandra at 9:36 AM

Fascinating and comprehensive, though,personally, the kosher would be surplus to requirements.
Love your work Elliot and Sandra.

WEith a few exceptions Kosher food is rarely as tasty as traif (non Kosher) Fish without scales, lobster, oysters, pork and quite a few other things are out BUT grasshoppers are OK!