Find your way to Shipp St. in the Wan Chai area of Hong Kong and take the lift, from the street, to the second floor to find this extraordinary restaurant. 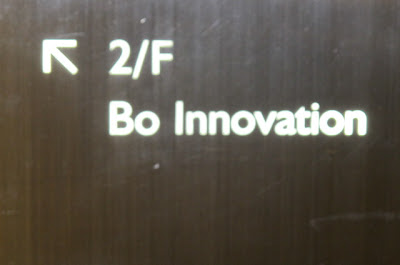 Michelin gave them two stars,and Restaurant magazine rated them 64 in the world. I would be tempted to rate them higher. I know very little of the fine dining possibilities in Hong Kong but I have no doubt that, for food, this is one of their finest restaurants. It occupies one modest size second floor room with additional tables on a terrace. Very simply furnished with minimal decoration, the seating is very comfortable with white clothed tables set for about 40 diners 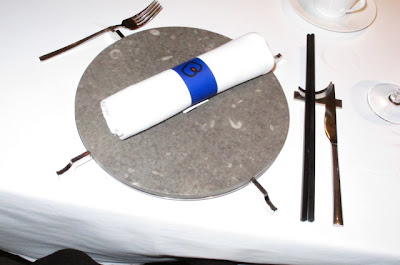 with another eight at a bar facing the kitchen. Oddly two adjacent apartments look straight down into the restaurant 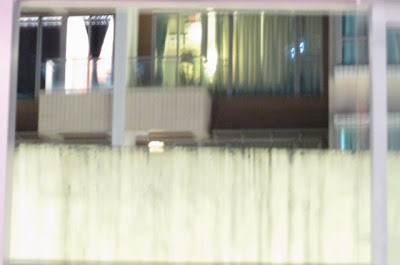 but no one is the slightest bit concerned.
They have two menus one with 13 courses for HK$1280, (about A$160) and another which includes additional courses: caviar, foie gras and abalone for about HK1640. 13 courses sounded fine to me. Wines are about HK$110 upwards by the glass or can be matched for an additional HK$600.
It started with an amuse bouche, variation on a traditional Chinese dish, a slightly sweet pastry containing a smidge of English mustard and Spanish ham in a paper bag. 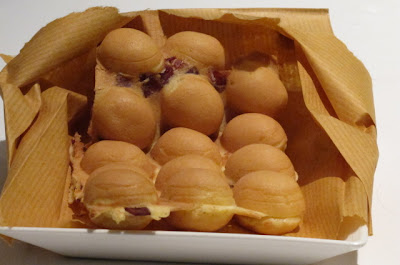 Strange but pleasant. Then dinner began.

OYSTER,
spring onion, lime and ginger snow was presented over a grated bowl pouring out smoke reminiscent of the smell of the sea. 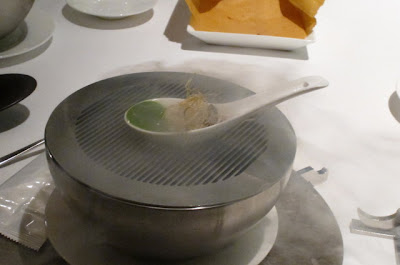 The ginger was frozen to the point where it lost some of the strength of its taste so as not to dominate the dish. After the smoke had cleared. 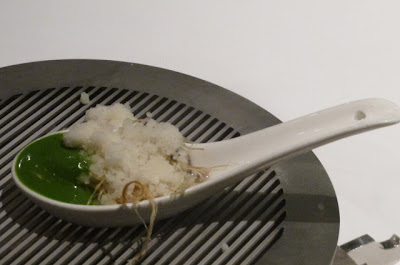 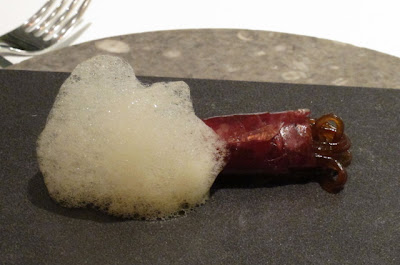 Eaten in one mouthful the tomato foam made no taste contribution to this dish but it did look good and the rest was great.
TERRA,
presented like a garden with things that grow in the garden including a warm escagot, cold yellow watermelon,, watermelon jelly, garlic flower, porchini and chive 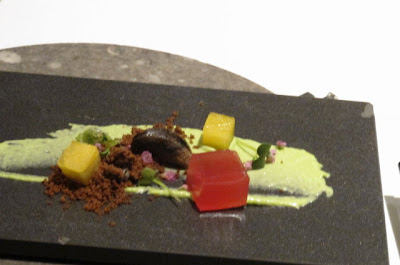 this was an illustration of contrasts of warm and cold, of delicately spicy with slightly sweet bland fruit. The rest added to the decor but not to the taste for me. Quite appealing to the eye and finely balanced.
FOIE GRAS, 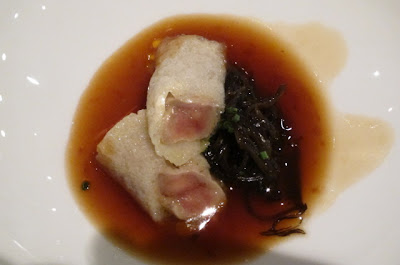 bamboo pith surrounded the goose foie gras next to the shredded wood fungus which was finished with a very mildly vinegary pigeon gravy. Better and better.
HAR MI, 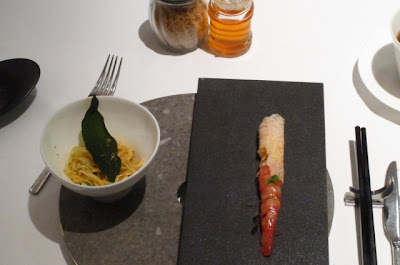 lo mein, (noodles) chili, sage carabinero. (48 hour air dried shrimp), came with a shrimp oil and powdered shrimp to be added as desired. There were two prawns, one cooked and one raw looking like a slender cone. The cooked part had been wrapped in thin won ton pastry and briefly deep fried, the end being filled with a fine roe. It just couldn't get much better than this.
TOMATO, 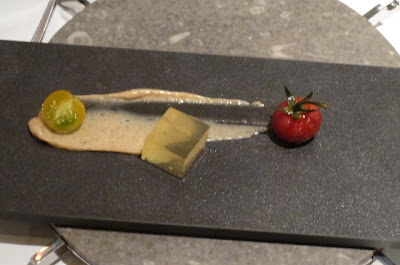 just that, one cherry tomato marinated in 'Pat Chun' a Chinese vinegar like a light balsamic, a smear of a tomato puree and a small half a tomato. Almost like a palate cleanser light and gently flavoursome.
MOLECULAR, 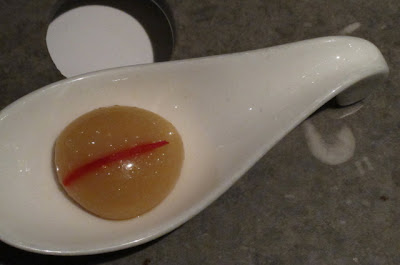 hats off to Feran Adria. A full flavoured pork broth encapsulated in a fine skin vaguely like agar. Taken in one bite the flavour immediately fills the mouth while the surrounding skin fades away with no need to chew it.
CORAL TROUT, 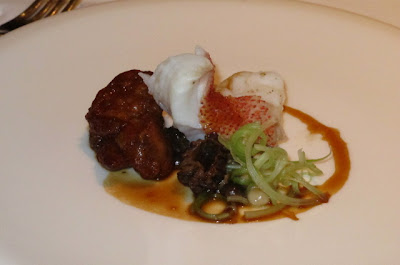 a very odd combination of veal sweetbread, oyster, morel, Chinese leek and pan fried trout in an oyster sauce. The trout was over cooked and too firm. Each of the ingredients was tasty, especially the sweet bread but the morels were lost and the dish did not combine well to make something special.
CRAB, 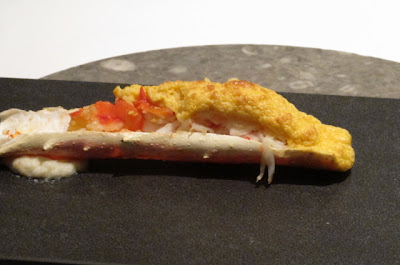 half an piece of Alaskan crab claw was resting on a little mashed potato. It contained the lightly spiced crab meat covered by a roe souffle. I got a little excited and started eating this before getting a photo of it.
PIGEON, 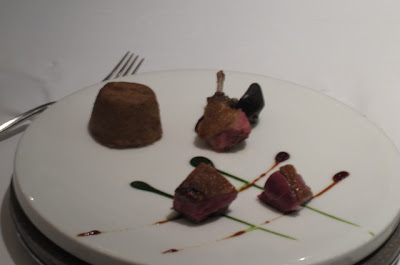 wood fungus, shitake rice cake, it really had a great mushroom flavour and two utterly memorable pieces of pigeon breast and a leg sat over a strip of pigeon gravy and a Chinese vegetable puree (choy sum). This was the dish of the night, though a poor photo. Perfectly cooked, tender and rich in tastes everything matched.
SANDALWOOD, 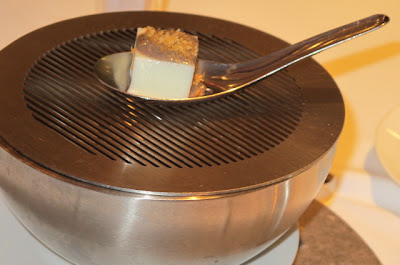 a jellied almond and sesame cube sprinkled with walnut. A sheet was withdrawn from beneath it letting the distinct and pleasant aroma of sandalwood fill the air. It achieved it's aims but was short on flavour.
PINEAPPLE, 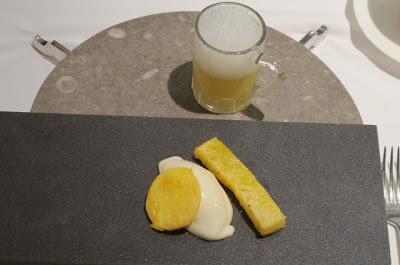 another variation on a Chinese dish, a pineapple shaped bun here represented by a puff pastry disc, a butter ice cream and a stick of pineapple served with a white chocolate latte. Not the most exciting of dessert dishes.
PETIT DIM SUM, 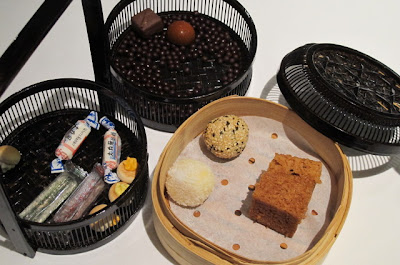 completed the meal. This collection of Chinese petty fours was almost too much rich chocolate. An air dried dark mandarin chocolate, a chocolate cumquat, a dessert spoon full of little chocolate balls, a collection of Chinese sweets, a carrot cake a pina colada ball with a light dry custard filling and a sesame ball filled with chocolate like a fondant supplied calories for a week. Although dominated by the sweetness once again this dish demonstrated the major characteristics of the food here. Colour, texture, variety and respect for it's Chinese heritage.
Chef Alvin Leung is a character. 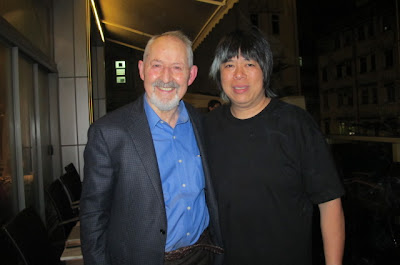 He presides in the kitchen, chatting, describing and serving dishes to those seated near him, slipping out to the terrace occasionally to enjoy one of his four daily cigars. He says his taste buds recover after a few hours and he does not smoke on days when he is creating dishes. Formerly an engineer he is self trained as a chef and has only been working as one for six years! He says he has a great memory for tastes and flavours, is meticulous and a perfectionist and has been called the Demon Chef. his food has been called X-treme Chinese cuisine. It combines aspects of molecular cuisine in an extremely successful fusion of French and Chinese cooking. This is beautifully presented with a few theatrical flourishes. He is careful not to overdo the theatrical bit because he recognizes that patrons do not want to go to the same show again and again. To keep his regular patrons he creates a new menu every couple of months so this is a must for my next visit to Hong Kong.

A guest at an adjacent table was also taking photo's and kindly sent these to me. Here is another menu. 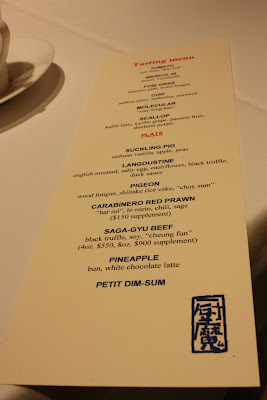 Tomato, a better picture than mine. 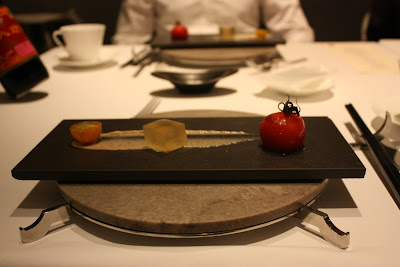 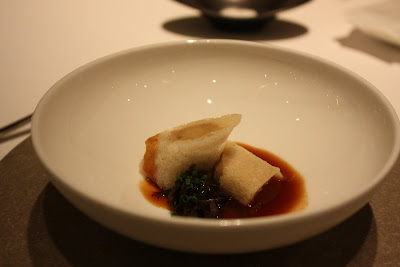 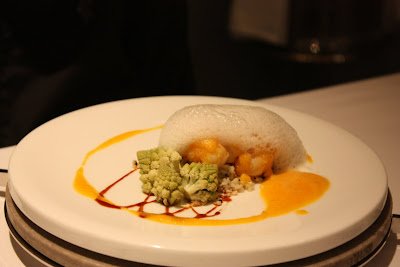 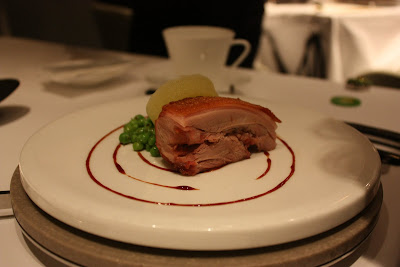 Perhaps Black Truffle Soy, I did not get this dish. 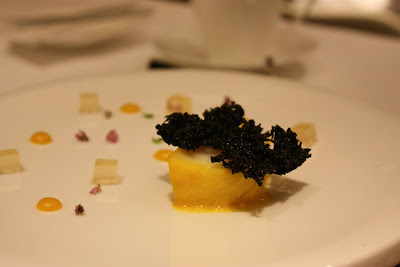 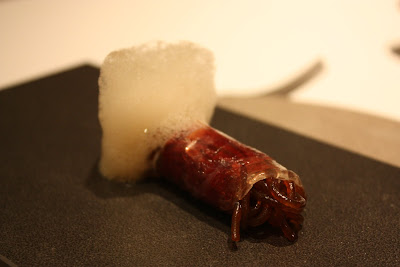 This was called Sex on the Beach, unless I'm having my leg pulled! I'm not sure why. 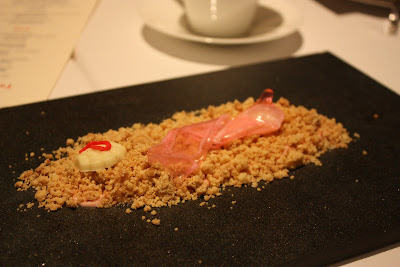 Posted by Elliot and Sandra at 1:48 AM

Wow What a meal!

The quest for the perfect hamburger is eternal.

Next time we're in HK we'll definitely visit Bo.
A patron at the next table has kindly sent me some photo's which I will add to the review.