"Fresh, crystalline and sharp, the first nose unvails an unusual dimension, an aquatic vegetal world with secret touches of white pepper and gardenia. The wine then reveals airy, gentle richness before exhaling peaty scents.
On the palate: The attack bursts forth and matures into a gentle fullness that winds around itself like a tendril of foliage. Notes of aniseed and dried ginger linger on the skin of fruit (pear and mango), more textured than ripe. The finish gradually unfurls and then settles smooth, mellow and all-encompassing. An indefinable je ne sais quoi, never upsetting the integrity of the wine, has worked its charm."
These are the words of Richard Geoffroy, Chef de Cave Dom Perignon, and as I read them I don't know if I should laugh or cry.
For what it's worth he is talking about the just released Vintage 2000 Dom. Perhaps it helps to appreciate the meaning of all this if it is presented at an extravagant price and at a top quality restaurant but I think this man might have a future at Mills and Boon if he gives up the wine business.
Shannon Bennet launched the 2000 vintage at Vue de Monde last Wednesday with a dinner for about 30 well heeled patrons of whom, I guess, perhaps 15 were paying for themselves (including me).
On arrival we were offered the 2000 vintage and refills were freely available. It took about 40 minutes after the scheduled start of the evening before we were seated and the first course arrived.
A cube of watermelon with a small hole filled with Oscietta caviar on a base of frozen Vintage 2000 Dom was, I thought, better without the base which added a little bitterness to the dish 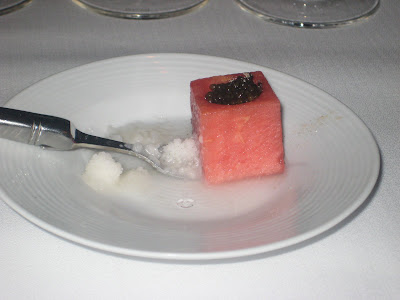 This was followed by a great creative dish - a yabbie, broccoli jelly and duck consomme, spiced with ginger, cooked at the table. It lay under a glass dome while the soup bubbled through an ancient apparatus and seeped thru vegetables, crustaceans and spices before being poured over the waiting dish pictured here before being cooked in the consomme 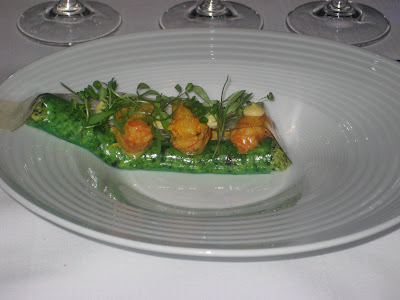 This was accompanied by the 2000 vintage now served in a wine glass ( not quite Marie Antoinettes size) which was supposed to so radically change tha nature of the wine that it underwent a sex change from tightly held feminine to broad, expressive masculine and so on
The next course was another great dish - roast White Rocks pork belly with pork rillettes pancake and panada and stuffed baby apple. 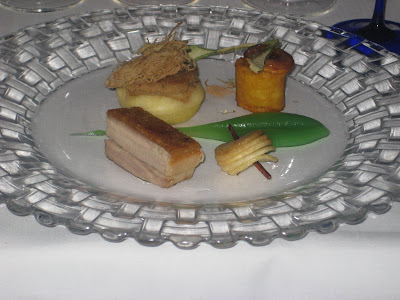 This came with another great champagne - the 1992 oenotheque vintage also served in red wine glasses. Once again I have to say the pork belly was totally fantastic and my only wish was that there was more of it. The accompaniments added some balance and sweetness to make the whole thing a delight.
One of Shannons regular specials, a clear cold consomme of tomato with gaspacho jelly and a little dry ice causing it to smoke, taken through a straw came next as a palate cleanser 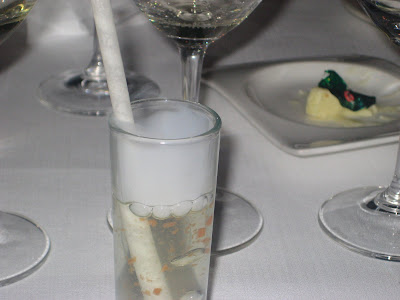 then followed a deconstructed quail burger 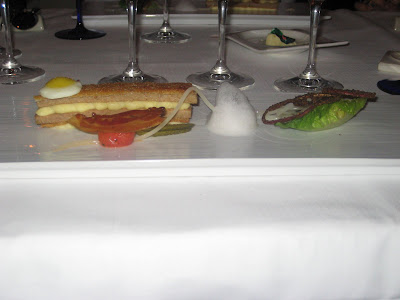 Neither my partner nor I liked the famed 1998 Rose Vintage Dom that came with this dish.
To me it had a powerful earthy nose, a great example of terroir, not to my liking and the powerful flavour of the wine was not improved by the long astringent finish. We also felt that, attractive as it was to look at, a 'hamburger' is not the best accompaniment for what is regarded as a great champagne
The dessert provided more theatre The tartare of figs covered by a sheet of white chocolate looked interesting. A beaker of hot olive oil and honey was the poured over the chocolate which then partially melted and collapsed into the dessert. 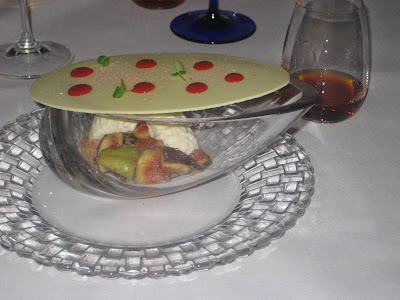 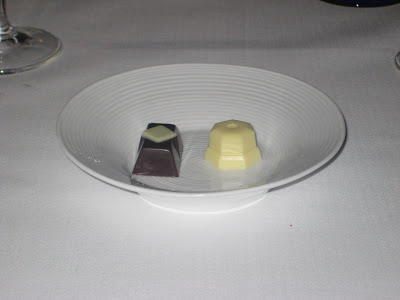 before the tea/coffee and petit fours 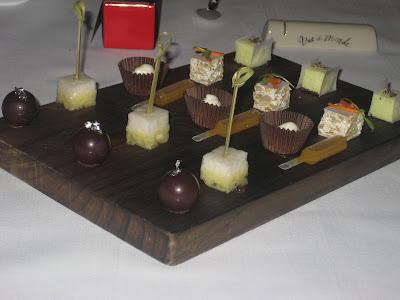 Price: $590/person
Comments: This is, by some considerable margin, the most I have ever paid for a meal in Australia and I would not recommend it it it was to be put on again. The food was, as always, quite excellent though I could have done with quite a bit more. I found the wine interesting but would have liked much more variety and the discussion about the wine left me cold.

Posted by Elliot and Sandra at 5:22 PM

Hello,
Thanks for this all information about melbourne restaurant and it's deal
dinner deals melbourne