Rudesheim, on the romantic Rhine, is in the heart of the splendid Rheingau region, This little town of less than 11,000 residents manages to entertain some three million visitors each year. Apart from its quaint beauty it has two other major attractions being its mechanical music museum and its coffee. It uses a local brandy, Asbach, to make what is described as the epitome of sophisticated hospitality, Rudesheimer Coffee.
It is started by placing three cubes of sugar in an original Rudesheimer coffee cup over which 40 ml of well heated Asbach is poured. This is stirred and and allowed to burn for almost one minute. 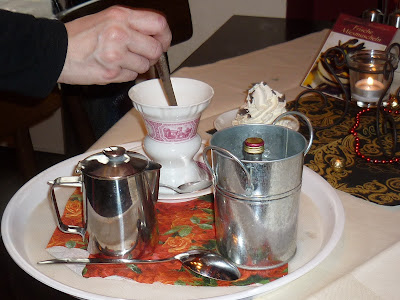 Hot coffee is now added until about two centimeters below the rim of the cup. 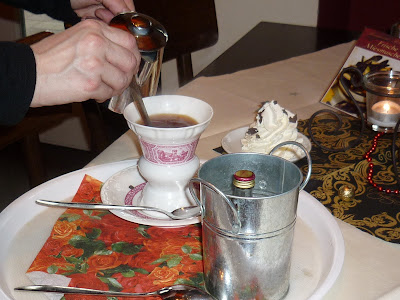 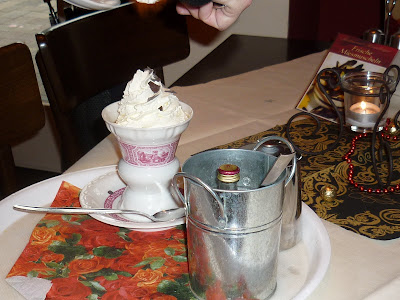 to produce this hot delight which is sipped through the cool cream.
There is also a cold version using ice cream, Asbach and iced coffee in which the brandy is not flamed.

Posted by Elliot and Sandra at 9:21 AM

I could go one of those! How's the reisling?

Hi Neil,
We'll do our best to make you one when we get back. Haven't tried the Eis wine yet but most of the reisling is pretty dry. Sampling a lot of light German reds and French merlot and cab/sav's

Hi Elliot, What significant meals have you had in Germany?

Hi John
We are on a highly organized river cruise with daily tours of mostly Medieval UNESCO World Heritage little towns with no time for anything more than a cup of coffee at most of them.
We did have one typical Bavarian lunch at a 600 seat bistro at Regensberg which we will write up as soon as we get I'net access that will allow me to download pic's. It was also X'mas and New year and all the best restaurants where we were were either booked out (Ihad tried to get into a couple before we left Australia) or closed.
All I can say is we expect to be back some time. We will try some places in Prague and Budapest before heading off to USA.
Cheers