This was no ordinary night and it was to be no ordinary meal. New Years eve in Paris at one of it's finest restaurants. The streets were packed with huge crowds of people preparing to celebrate and the couple of 100 yard from the Champs Elysee to the restaurant were filled with police vans prepared for trouble.The entry to this restaurant at 6 Rue Balzac, is through the foyer of an hotel past a sitting room through curtained doors into a very spacious split level dinning area. 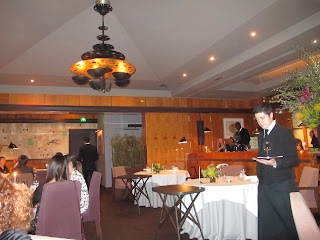 Immaculately set with attractive show plates, which are use for the amuse bouche, large white clothed tables are widely spaced. These 'tables would be best suited to six diners. Decor is simple. The room is in subdued light pages of a book Talleyrand' paper the walls. 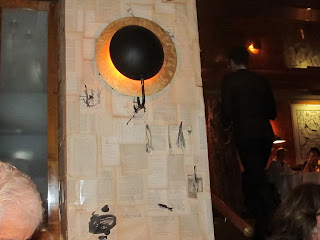 We were four and were so far away from each other that it was difficult to have a conversation. It is a rare thing indeed to find a table too large for comfort. 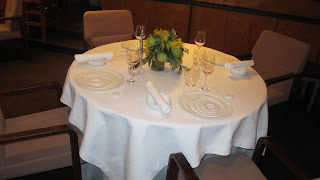 Well dressed waiters are immediately available however their English explanations about the dishes were often very difficult to understand despite several repetitions. This was not helped by the menu which was prettily presented wrapped in a ribbon at the start of the meal. It was entirely in French. Since English speaking tourists make up a significant proportion of their clients I think this could have been considered.
The amuse bouche was an elaborate four part presentation. 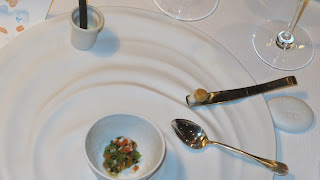 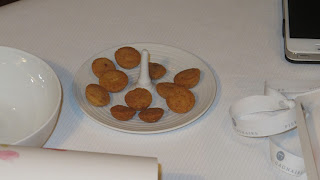 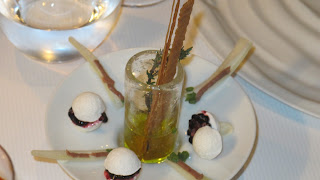 Crunchy bread dumpt sic in sweet olive oil (Santa Tea) This was the first of five breads, a different one coming with each course. Wether they were made with squid ink or mini batons or whatever, despite the two butters they were all small and extremely crusty.

Caviar Beluga - cristal Grey Goose - crevettes grises. The sphere sitting on the crumbed egg yolk, adjacent to the caviar had to be gently pierced to allow the vodka to escape and sauce this dish of several layers including haddock and crab meat which was the most prominent taste. No doubt a triumph of technology I thoroughly enjoyed it although I found it more a curiosity than an exquisite experience. (8/10) 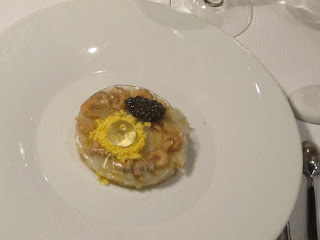 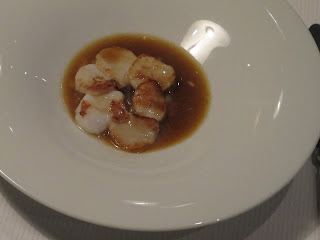 Huitre Pied de Cheval (25 years old) I am not sure what they were endeavouring to achieve with this dish. Novelty perhaps a shock. The stress on the age of the oyster aroused sympathy  why kill a 25 year old oyster, concern, does one really want to eat this ancient specimen, and other mixed feelings. It was
served after being displayed, 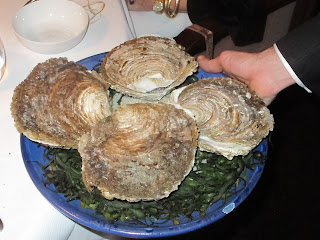 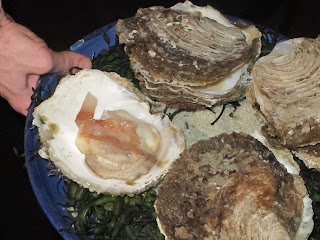 in a rich bisque with abalone on a bed of green leaves. Each oyster was about as large as four ordinary oysters. It had a very strong, almost exaggerated taste of oyster and the sea. This overpowering taste stayed with me for the next few courses and really destroyed my enjoyment of the rest of the meal, a feeling shared by everyone at the table. At their request our partners were provided with palate cleansers but they had little effect. 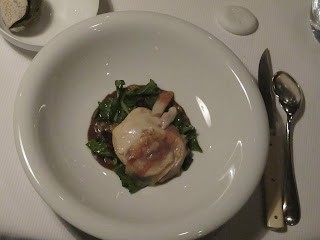 Barquette de truffe blanche de Alba/Champignon de Paris. This was a gnocchi with a light Parmesan  flavour with a combination of several other flavours which were largely lost with the oysters we had just eaten. I would have loved to have had this on another occasion. (?/10) 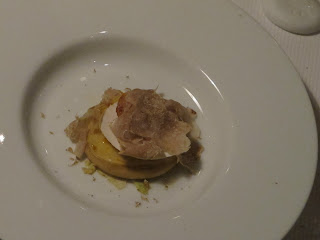 Gateau de poireaux Richerenches covered in black truffle this was yet another rich and heavy dish although the langoustine were as delicate and delicious as these crustaceans ever can be. (9/10) 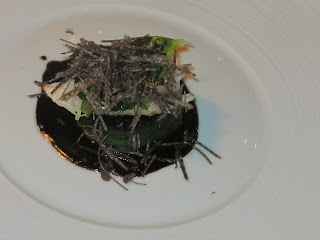 Pave de bar de ligne poche dans un beurre clarifie/truffe.
More truffles! Not a large dish but quite rich. The last of the oyster was slowly departing but I was now suffering from over indulgence. It would be unfair to judge this dish which was generously covered with slices of truffle which had plenty of aroma to add to the unusual textures and tastes of each thing on the plate making remarkable combination of well integrated flavours. (?/10) 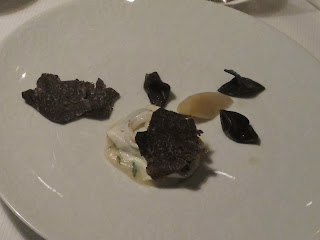 Cubes de foie gras rouge oie gras was covered in jellied beetroot and served with a dom Perignon flavoured white martini. I loved this dish for both its flavours,  textures and pure fun. (10/10) 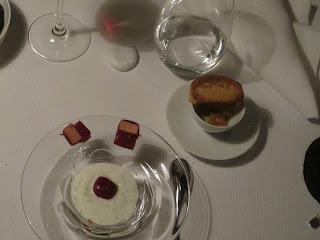 Quasie de veau fermier. When the waiter displayed this piece of veal in the pot  we expected something other than the few small bits, they were not slices, that appeared on our plates a few minutes later. Once again it was served with a very heavy sauce and one can only wonder where the rest of the veal went to. 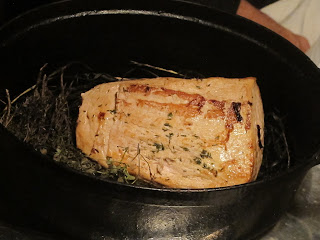 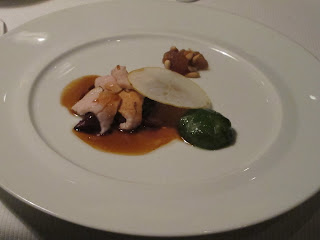 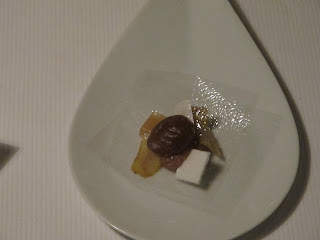 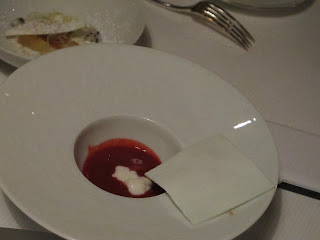 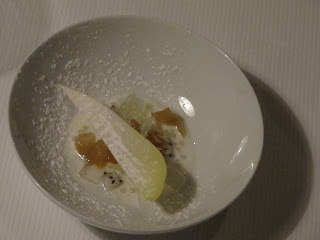 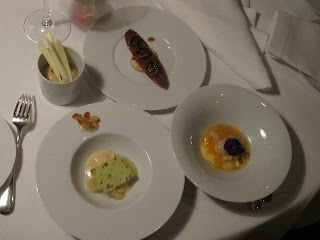 We were pretty frustrated by the end of the night . We had suffered through a very heavy meal, quite unbalanced, and there had been not the slightest gesture that we were welcoming the New Year. Midnight passed and that was that. e asked for the bill and a taxi. The waiter seemed almost pleased to tell us that no taxi could come because the area was closed off. Out into the rain now we were further inconvenienced  by the police who obliged us to take a detour to get back to the Metro. A very inauspicious start to 2013.
Note this was a very special menu and not the usual except for the amuse bouche although some of the dishes may have appeared on the menu at other times. There was something of an excess of truffles with a smaller representation of those other celebratory specials, foie gras and caviar.
Score:16/20, on this night