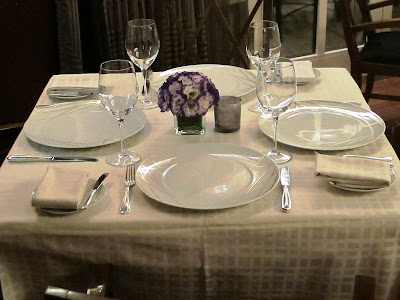 La Regence is situated in perhaps the most prestigious hotel in Jerusalem which has been visited by most of the European nobility and heads of state including Bill Clinton, Richard Nixon and even Anwar Sadat and Mubarak and Barak Obama, before his election as US President. The restaurant is in a magnificent room overlooking the Old City of Jerusalem. 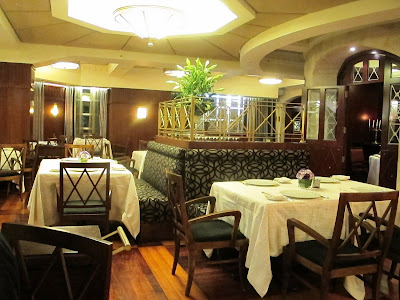 In line with common practice in better restaurants a chef’s offering of green beans deep fried in batter with a topping of finely chopped red peppers arrived before the entrees. Nothing to rave about but quite a nice simple start. The restaurant is kosher which means that no milk products are available and meat and poultry can only be well cooked because of the salting process in making them kosher. It is not possible to have foie gras barely seared. Unaware of this at the time we ordered foie gras ‘praline’ (NIS85) and when the first serve was very overcooked and the waiter asked if everything was to our satisfaction told him truthfully it was not. He returned it, half eaten, to the kitchen and served a second portion. Here the praline was served with a piece of excellent foie gras their second effort was much better and their attitude greatly appreciated. 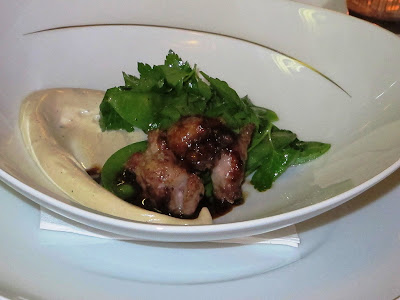 My lamb sweetbreads with Ethiopian tahina was also seriously over cooked. I must say I tasted no distinguishing features in the tahina which was just like any other though a fraction firmer. A poor dish for NIS85. 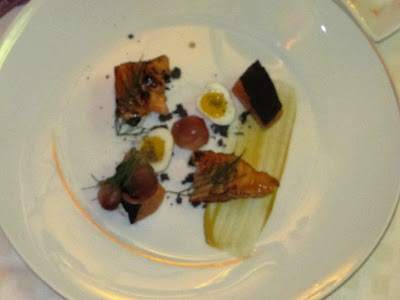 Salmon in ginger jelly and smoked salmon (NIS75) was a better alternative.

A palate cleanser of five spices was dominated by mint was unusual and effective. 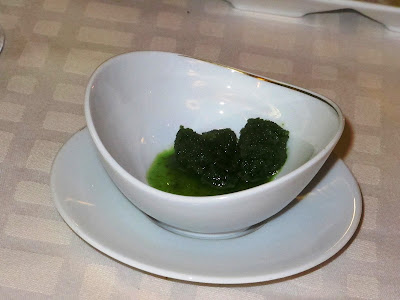 For mains Sandra had a fillet of beef ‘Financier’ with asparagus and Jerusalem artichoke, (NIS165) which they did manage to serve blue. It was a very nice piece of meat. 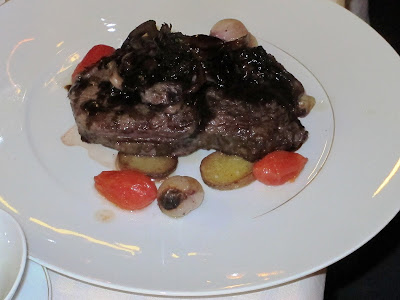 An entrecote in red wine sauce (NIS150) was described by our friend as ‘mitzuyan’ Excellent. I had Norwegian cod on a carrot paste with green beans and peppers (NIS150) which was a fine fillet. It could not have been better. 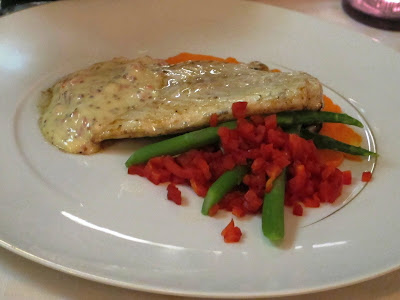 Ravioli filled with Portobello mushrooms in mushroom stock (NIS90) was a fine vegetarian option. We finished the meal with a very simple dessert of mixed fruit with zablione 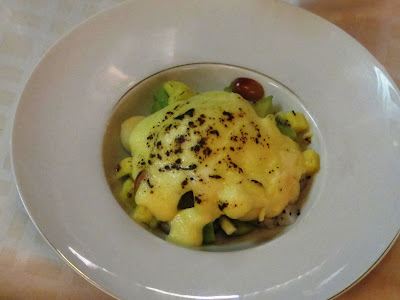 and coffee and petit fours. 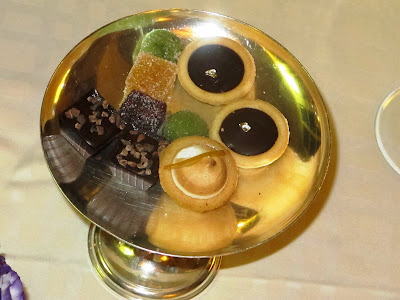 This is a beautiful restaurant in a lovely setting that serves simple and rather unexciting food of the best quality.
Score: 14.25/20
Posted by Elliot and Sandra at 4:55 PM