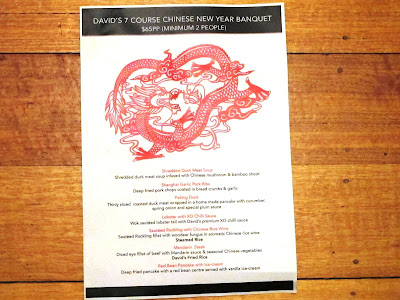 David's has long been an AGF one hat restaurant, featuring an emphasis on the curative properties of their various teas. It's Chinese New Year. The year of the Dragon is upon us so we're going to have a seven course banquet ($65 pp only $6 more than their usual major banquet. The place is packed and noisy. Since we were last here they have added more tables to the front of the place and removed the stands of teas. They've also added some new decoration along the wall.
Service is a little slow with the large crowd but after a one hour lag from when we arrived until the second course dishes appeared at a reasonable rate.
Shredded duck meat soup infused with mushroom and bamboo shoots perfectly described this dark and satisfying soup. 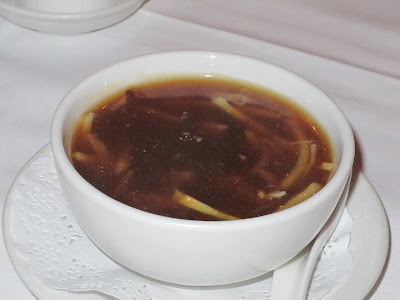 Shanghai garlic pork ribs which were actually dried pork chops coated in bread crumbs and garlic, there were however no bones, seemed a very un Chinese dish. It was quite pleasant and could have been served in a Mediterranean restaurant anywhere. 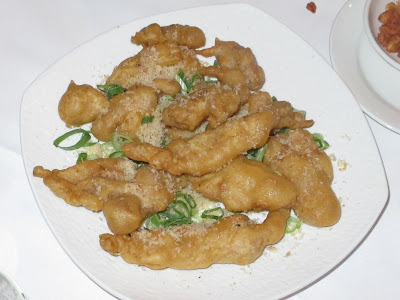 Peking duck, supposedly thinly sliced roast duck meat in a home made pancake with cucumber, spring onion and special plum sauce was a poor effort. The duck was a thick slice of breast and the pancake quite thick. It was presented wrapped and ready to eat. My duck had a little plum sauce, far to little, at the bottom of the pancake and the cucumber and spring onion were lost with the thick piece of duck breast. 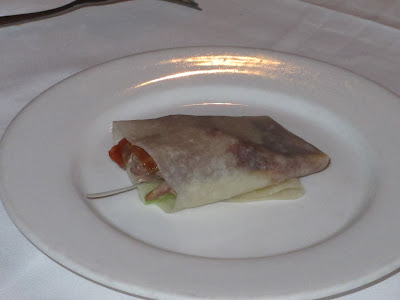 Lobster with XO chili sauce was overcooked and the lobster meat was quite tough. I'm unimpressed with strong sauces and delicate sea food but on this occasion it hardly mattered as the over cooked lobster had lost any delicacy. 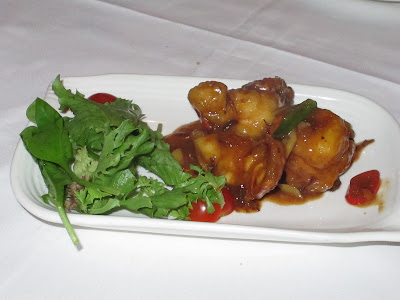 Sauteed rockling with Chinese rice wine and woodear fungus served with steamed rice was a complete contrast to the lobster. A beautiful dish worthy of David's reputation. 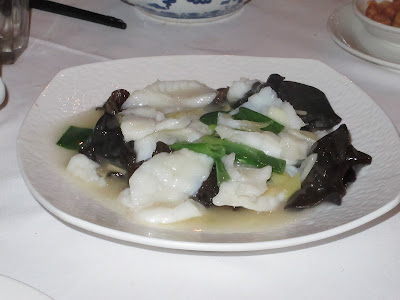 Mandarin steak, diced eye fillet with Mandarin sauce and seasonal Chinese vegetables came with David's fried rice. A good dish but the presentation with large Bok Choy on the plate adjacent to the small diced beef jarred aesthetically with me. 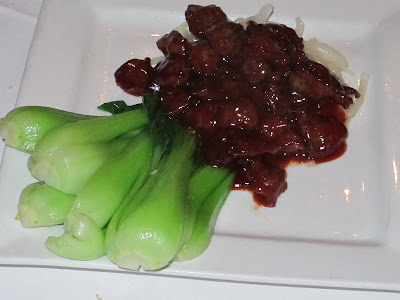 Fried rice was excellent, which it almost always is at any Chinese restaurant. Red bean pancake with ice cream was a pleasant end to a very patchy meal. 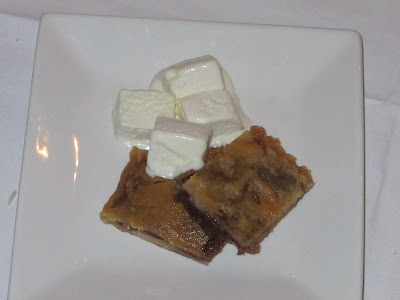 One hat restaurants don't always live up to their reputation.
Score 13.75/20

Posted by Elliot and Sandra at 9:26 PM

The whole Good Food Guide thing really bugs me when it comes to Asian food, particularly Chinese and Japanese food and also Italian food. Shops which really deserve a hatted status never gets one, but celebrity chefs related restaurants always gets a hat or 2, even if the quality is poor.

I used to like David's but didn't adore it, but may be your particular meal wasn't too good. But Bamboo House in comparison is as good Shanghainese food as you can get in Hong Kong when it comes to execution.

And Bamboo aside, Silks, Lucky Chan are as good as 1 Hatted David, The Atlantic, Maze, Rockpool Bar & Grill in the same complex or a lot of Michelin 1 Star restaurants in HK, but obviously not Flower Drum quality as yet.

They've definitely lost some credibility IMHO. Kuni and Hanabishi were at least equal to Yu-u and the over-rated Hajime Tempura, but they were too traditional style to be appreciated.

And to think Di Stasio is worthy of 2 hats vs Grossi which is good, but il Bacaro isn't even worth of 1, but Dandelions and The Atlantic are? The whole system needs an overhaul.


People say the Michelin Guide in HK is giving recs or stars out too loosely, but at least some restaurants receive proper mentions. The AGFG only ever gives them to the regular featured proprietors or master chef judges. Poor effort.

Hi HK
We too find the AGFG erratic and feel that it displays bias and favours those who have established some sort of celebrity. It is very useful for addresses, phone numbers, and opening hours. One needs to take the rest of it with circumspection. There are two types of deficiencies. Omissions, particularly where good suburban restaurants are ignored are unfortunate. Judgements may appear to be reasonable but are influenced by a myriad of what, may be referred to as competing interests. If Di Stasio places half page ads in the Age every week it's going to take some sort of disaster for them to reduce his status. When one of their favourites moves to a little suburban restaurant it's going to be reviewed, and nicely too. At least the Michelin Guide is based on the anonymous opinions of people who really know what they are talking about. All guides have their problems but I think it's worth looking at a few different sources, with a critical eye, to help if one is deciding where to go. The opinion of friends is often more valuable than that of 'experts', especially as it allows for discussion about things rarely mentioned in reviews. Things like the toilets, comfort, noise, presentation or whatever else might interest you.
At the end of the day no one knows your taste quite as well as you do and even our reviews have to be taken with a pinch of salt.
Perhaps the AGFG should take the time to look again at restaurants where a lot of the public disagree with them. Michelin is, of course, impervious to criticism.