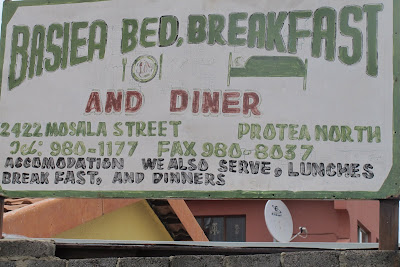 SOuth WEst Town is the possible origin of this town which has been in the news so much over the massacre of youngsters demonstrating against being forced to take their classes in Afrikaans that it is known through out the world. It is the area to which Johannesburg blacks were sent to when they were forcibly evicted from their homes when apartheid was introduced into South Africa. It’s a name that one associates with Nelson Mandella or Hector Pietersen rather than restaurants but it is now a huge thriving place with millions of residents. We were fortunate to enjoy a taste of Soweto, in Soweto by Sowetans. 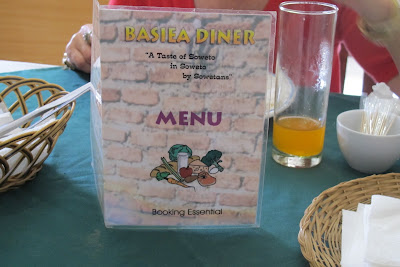 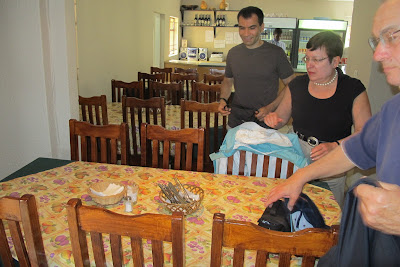 mostly catering for groups with Afrocentric buffet meals which cost from $15 to $20/ person. We have had quite a lot of buffet meals in Africa and, although they often look quite similar, they vary greatly in the quality and tastes of the dishes. This was particularly enjoyable because the food was cooked well with good products and good seasoning. The food was laid out on a side table, here is a small part of the salads before they were unveiled. 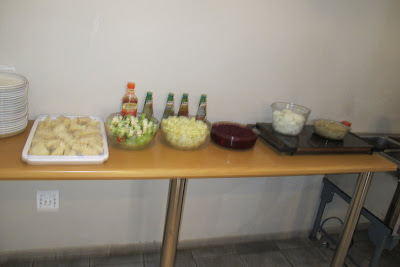 One dish that is common throughout Africa, with great variation, is known as pap. It has many other names in other parts of Africa and many presentations. It is made from white corn or maize, which can be ground to a powder and cooked like rice, it can be made like polenta or served like porridge. It can have vegetables added to it, or meat too and it can be served as a dessert with a sweet syrup. Here it was served with beans as a stew as it was here and also as plain cooked powdered corn which could be eaten a bit like mashed potato adding other curries or stews from the buffet for flavour.. This sort of porridge, with beans is the form that sustained Mandela as he grew up and which he still loves. The corn provided carbohydrate and the beans provided protein. We ate pap at several African meals and found it the best here. My plate here has on it clockwise from the chicken leg, beetroot, simple white pap, garden salad, lamb stew, bean and maize pap and beef stew without the sauce to give some idea of what the food looked like. 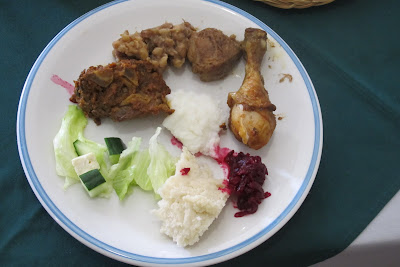 The remainder of the buffet was typical with salads and meat stews finishing with an excellent dessert of apple pie, jelly and custard 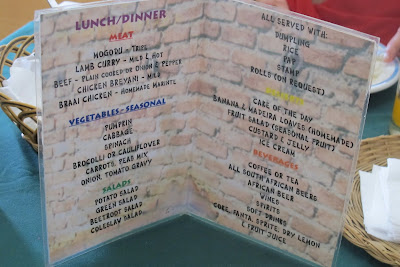 The family that own Basiea do the cooking and help with service. They are very happy to talk about the ways that their food is prepared and sat and chatted with us which added an extra dimension to the meal. Mum is the chef and Dad works in the front of the house. 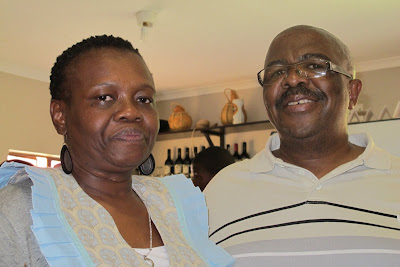 A simple home style African meal that was tasty and enjoyable from the first mouthful to the last.

Posted by Elliot and Sandra at 8:21 AM