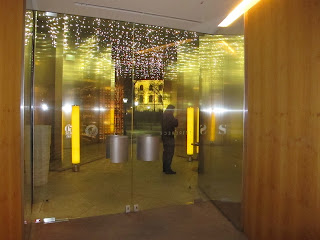 Steirer, I believe, is a street or place in Vienna and Ek means corner which is where the renowned Steirerek restaurant was until about 10 years ago when it moved, with it's name, to the Stadpark on the edge of the CBD in Vienna.
Anyway, according to San Pellegrino it is currently, and has been consistently, in the top 50 restaurants in the world. They're always very heavily booked. If you want to eat there reserve your table months ahead.
The place is very elegant with a number of small separated areas with five tables each. In all they seat 120 and serve lunch and dinner. They offer both an a la carte menu and a six or seven course degustation meal with matched wine if desired.

They have on show a lot of products which are for sale.
there is also a cognac and schnapps trolley and a display of wines they serve. 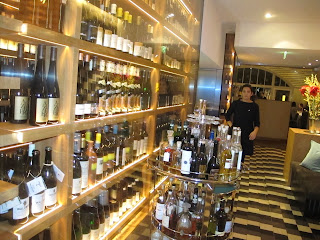 The open kitchen is a hive of activities witha mass of chefs plating dishes. 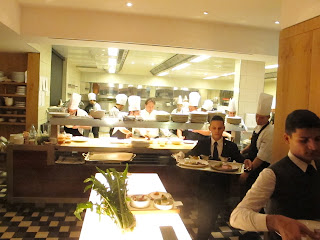 A bread trolley comes around with about 15 different varieties of bread from nine bakeries. 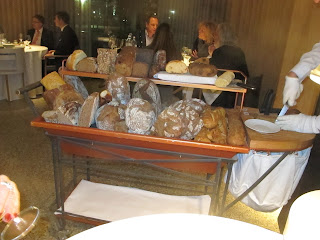 They're are too good, irresistible, could they be better than the dinner?
But before that there are a series of tasty amuse bouche which are small, but not tiny.
This potato construction rests on a bed of pine nuts which were not supposed to be eaten but we enjoyed them too. 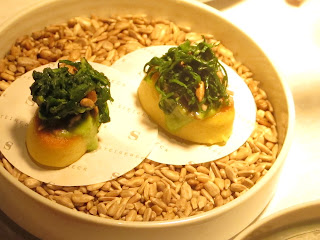 There was also a tartar on a small biscuit. 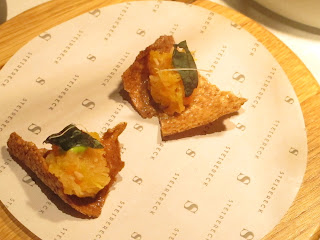 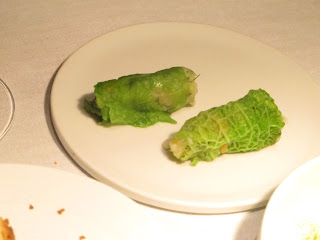 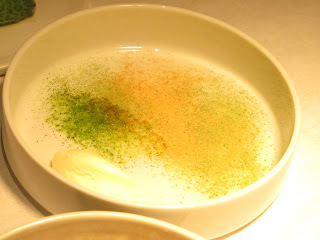 The last was a mushroom served on a crisp biscuit with radish and a little spicy dressing. 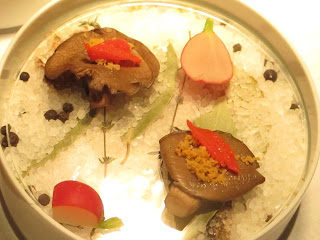 All very attractive with considerable display of technique, display, taste and texture.
We started with a champagne. 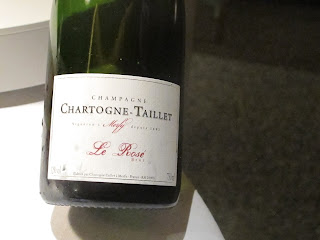 followed by the matched wines, most of which I did not really like!

After this we we were served our first course: "Pumpkin in Variety with Yacon, Sesame & Monardo" 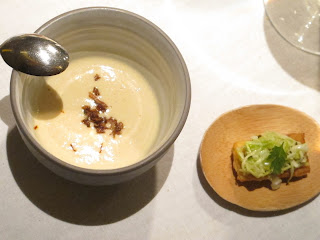 This was presented with a little card describing the contents of the dish which was as follows.
Spaghetti pumpkin & nashi pear vegetable
Butternut squash marinated with hot lemon chili and lemon
Preserved pumpkin "Futsu Black"
with sesame oil grilled & monardo vinegar glazed yacon root
Crispy shallots
Sorrel
Pumpkin in succo with monardo & roasted black sesame.
With a further explanation.
Yacon, a relative of sunflower is grown in the Andes for its crisp sweet tasting roots. (From Alfred Scheck/ Lower Austria) and
"Futsu Black" Originally from Japan this small moschus pumpkin with a riooed surface has a firm consistency. The fruit is orange with a nutty chestnut like flavour. (From Krautwerk/NO)
All this raises a series of thoughts.
Firstly there is no doubt that this system relieves wait staff from the burden of conveying information to patrons in a noisy environment, often in not fully intelligible accents.
Secondly do people really want that information?
Thirdly did they really use all those ingredients, what difference if one of them was left out?
Fourthly, knowing all this can one reproduce anything like the dish presented?
We found the dish attractive and very rich but the pumpkin flavour was very mild. I think I can make a tastier soup with an onion, a carrot, a tomato and a bit of pumpkin in my Thermomix in 20 minutes!
The next dish was Chicoree with salted Physalis, Chestnuts and Sungold. 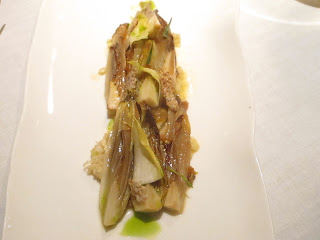 This time only seven products were mentioned including Tarragon oil. Explanations revealed that Sungold are yellow/orange cherry tomatoes with a tasty sweet sour flavour from Michael Bauer/ Stetton, Lower Austria. and little Buddha Physalis, also known as cape gooseberries have fruits high in pectin and vitamin C,
from the Wurm family/ Oftering, Upper Austria.
To me it seems extremely unlikely that this family information is of any interest to anyone except  perhaps Herr and Frau Wurm. Never mind it was an excellent dish. I'd have it anytime. With this meal the main problem was the size of the dish - substantial.
This was followed by Crayfish with Eggplant, Coconut, & Schonbrunn Citrus leaves. A dozen ingredients were noted including some cooking instructions.
We were also able to learn that Chupetinho are peppers in the Chinese  Capsicum family with a distinct fruity sour flavour and only mildly spicy and can be eaten whole with its seeds. 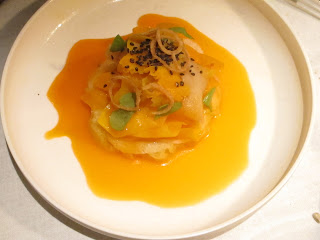 This variety of wild celariac has tender fine leaves with a slightly sweet spicy flavour. It comes from the Stiererek garden - not too wild after all! This was another rich and tasty dish with a small slice of crayfish meat. I would have liked more. 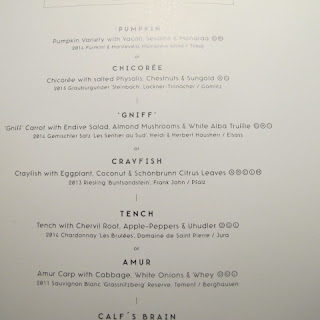 Tench, a fish I have never tasted before was offered with Chervil root, apple - peppers and Uhudler,  grape juice cooked red onions. It takes careful preparation to remove the wishbone shaped bones from the tender but firm flesh of the fish. I could not taste the supposed 'nutty' flavour of the fish but with the other eight ingredients well blended a very pleasing dish resulted. 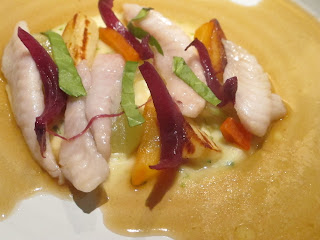 My next course was pheasant with salted lemon, braised onions, chard and ground cherry. Here 16 ingredients were mentioned, several of them twice. Another large serve with a rich pheasant jus. The pheasant was not gamey nor as rich or distinctive as I expected. 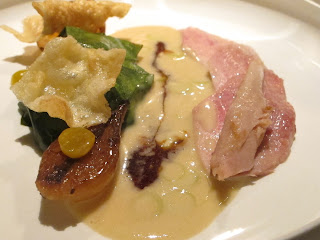 Sandra's aversion to game led her to chose veal liver dumpling with swede, Japanese artichoke and red cabbage. Here a dozen ingredients get a mention. There is then a brief note about crosne, a curious vegetable, which was not mentioned in the ingredients! 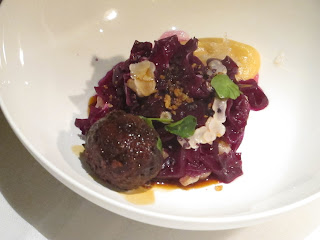 My next course was wild hare with parsnip, cardoon and kale. 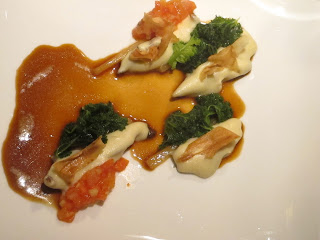 Another rich dish which I could not finish having eaten so very much. A quality serve.
Now for the cheese! 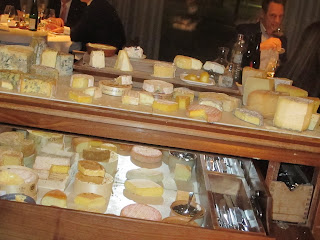 A substantial cheese trolley does the rounds from which we were invited to choose as many cheeses as we wished. 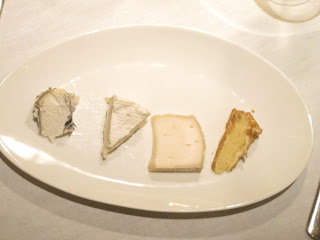 The finale was a crispy crepe with apple, nutmeg and cherry. 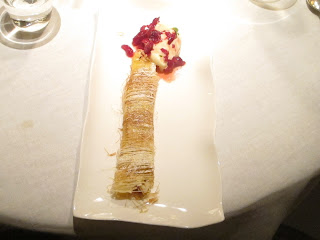 Could not have been better.
Tea is not a simple matter.
A trolley of herbs comes by so you can choose your flavours. 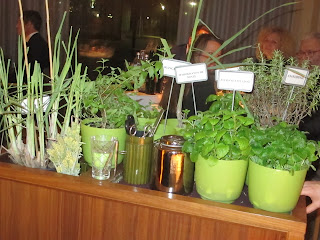 Water is the added in a glass and finally the lot is poured into a fancy teapot. 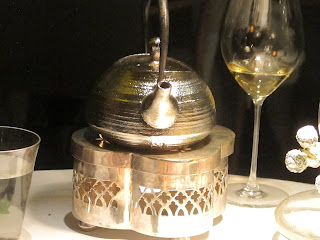 Of course they have to have petit fours. 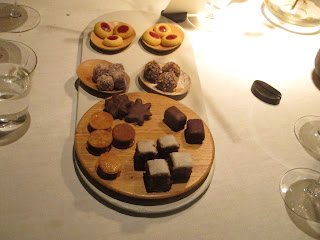 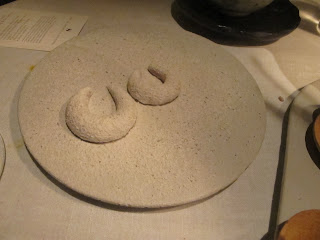 I doubt they expected us to eat two dozen biscuits and sweets but when I asked if we might take them home they refused but offered to sell us a box of biscuits for A$27!! 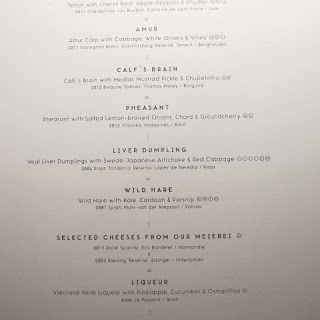 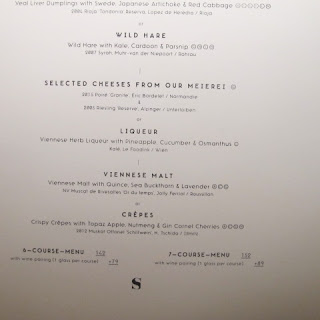 I asked three times for a menu to take home but although each time I was told yes of course it never arrived.
Service was quick and quite abrupt, a disquieting situation. Whilst each dish was interesting and varied the concentration on including unusual ingredients did not really do anything to add to them. For a seven course meal serves were too large which diminished the pleasure of the later dishes.
Score: 16.5/20
Posted by Elliot and Sandra at 10:50 PM