This is the rebadged former Beijing Szechwan, the sign remains, 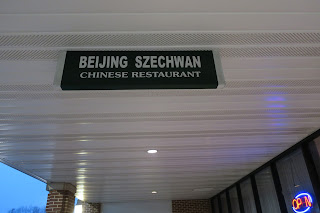 a Chinese smorgasbord which we enjoyed almost every day when we were here 5 years ago. Now it is a regular a la carte restaurant with a few lunch time specials ('till 3.00 pm)
It now has a Japanese section of tempura and sushi as well as the regular Chinese menu.
Despite removal of the smorgasbord the room looks very much the same. 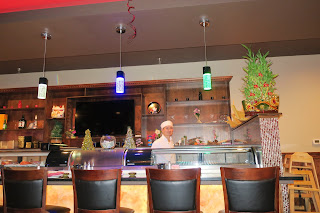 Even the table cloths are the same 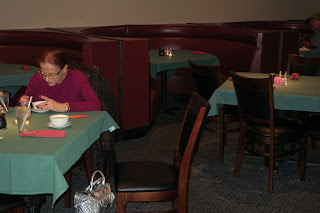 and the tables are set with knife fork and spoon 'though chopsticks are availableWe tried a few dishes to get a good feeling for the place. A won ton soup was a pleasant broth with two hefty won
tons. The pastry was thick and heavy. 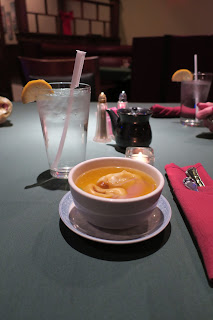 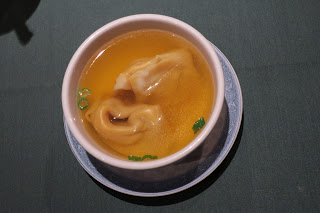 I can't remember worse!
A hot and sour soup 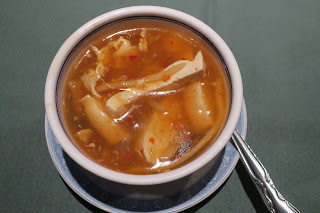 was gluggy
The most expensive dishes was a Seafood Combination, lobster, shrimp, scallop, Chinese veg. in white sauce. 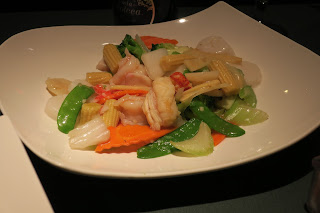 All the ingredients were there but there was only a tiny piece of lobster. But for one thing this was a nice dish. The vegetables were not too coarsely cut and the seafood was not overcooked. The sauce was there too, not too much of it BUT the problem was the dish was tasteless.
Sweet and sour pork ($8.95) was a huge serve compared to what you would get in Australia. 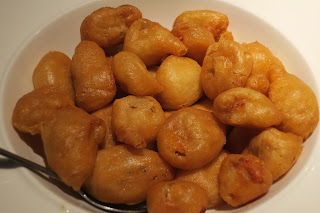 It came with a reasonable sauce but the pork was covered in a solid flour and water batter that dominated the dish.
Sandra had a combination soup which was a meal in itself. A bit short on taste but an OK dish. 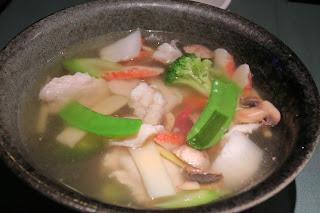 Chicken chow mein was a surprise coming with fried rice and a spring roll and fried noodles. 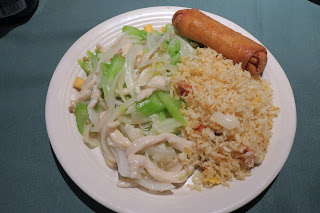 This suffered from the same problem as the rest of the meal, an absence of flavour.
Finally we ordered the only dish we have ever returned to the kitchen in a Chinese restaurant. Roast duck in a sweet sour sauce. The duck was ancient dry as jerky and cut into tiny pieces. Even if all you wanted was the batter, never mind the duck, it was inedible. 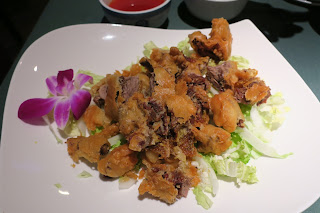 Certainly among the worst Chinese food I have ever eaten.
Score: 9/20
Posted by Elliot and Sandra at 2:32 PM