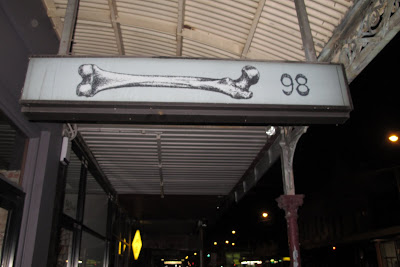 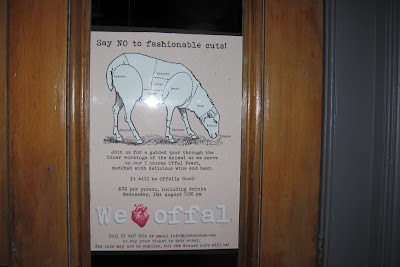 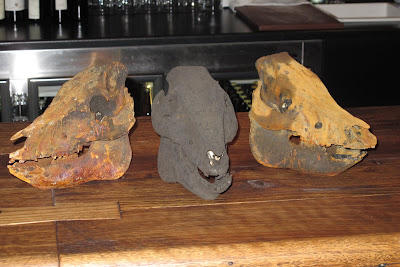 Carnivores don't have to love beer to enjoy a fantastic experience at Josie Bones but it helps. Set up in a barely decorated long room 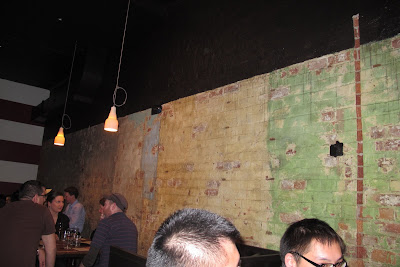 with a bar along one side 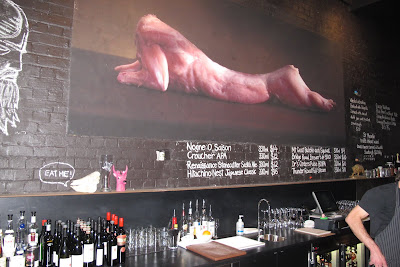 JB is an unpretentious joint, (the appropriate word!).
Every Wednesday they run a special dinner concentrating, usually, on one animal. Last Wednesday was a bit different. It was a remarkable eight course degustation offal dinner with matched beers and wines.
After a light welcoming glass of Weihenstephan Kristal Weizen the first course, an amuse of beef consomme, smoked ox tongue and bone marrow arrived. The marrow had been cut into little cubes and were a nice balance to the consomme. 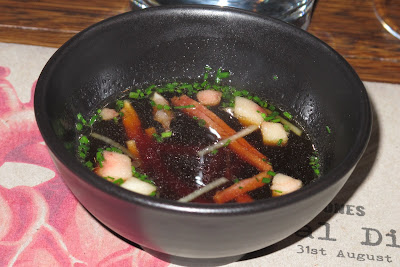 Dishes were presented without excessive delay, the next being lamb heart tartare, truffled quail egg with toasted brioche. This was served with a 2010 Provenance 'Golden Plains' Pinot Noir. This was a very pleasant light wine but my thoughts were on the tartare - raw lamb heart. Hmm.
Well, after tipping the egg out and mixing it into the meat, and adding a little of mustard it was excellent, there was also a peppery Tabasco, I think with added chili, if you wanted to bury the taste. A very mild flavour with nice texture it was preferable to the standard beef tartare, with virtually no fat. Quite a surprise. 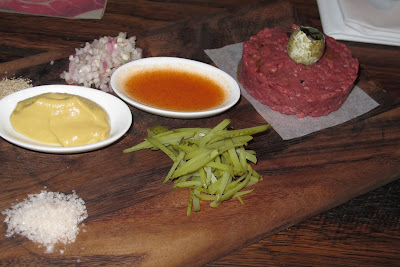 The third course was a ripper. 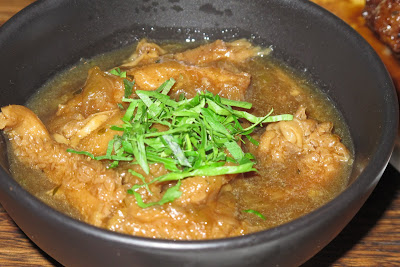 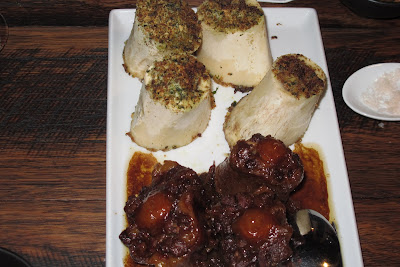 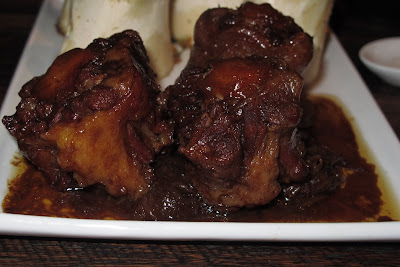 French onion tripe, roasted bone marrow, ox tail and onion jam.
Every bit of it was superb. The tripe a nice variation on the usual tomato sauce or the Chinese style with ginger the bone marrow covered with a spiced bruschetta were beaut but the oxtail was magnificent. Almost falling off the bone, having been slow cooked in beef stock, it had superb flavour. The Ichtegems Bruin Oak aged Wild Ale was an excellent match with it's strong oak flavour. 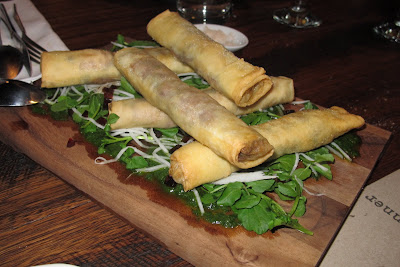 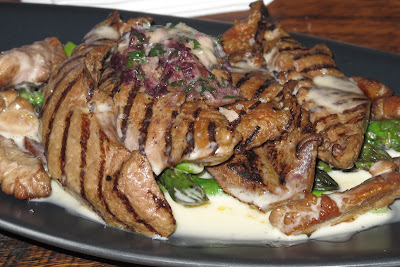 Fifth course was charred calves liver, veal sweetbreads, asparagus, cider beurre blanc served with a rather light 2007 Louis Latour Ardeche Chardonnay. This dish failed a bit because the liver had a lot of gristle like blood vessels which was hard and chewy, and the sweetbreads were sadly over cooked. This was a shame because the asparagus and the beurre blanc were very good and deserved better company.
The next course was a meal in itself. 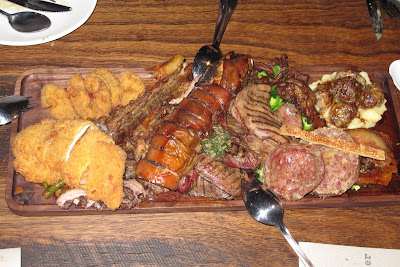 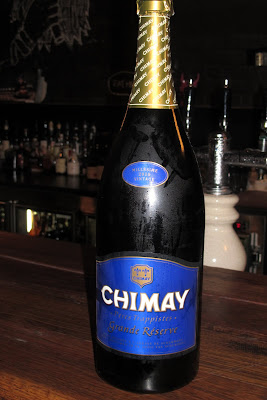 To go with this bonanza several magnums of 2010 Chimay Grand Reserve were opened. 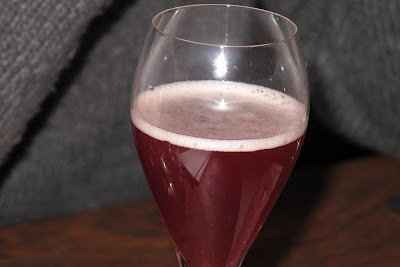 Despite being excellent eaters our table of five did not quite demolish this massive dish but we certainly enjoyed trying. A meat eater delight. 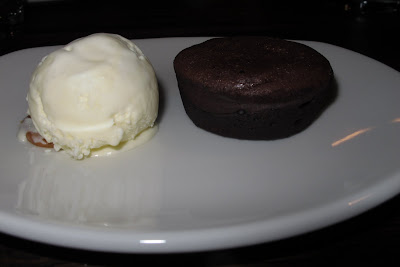 The dessert was chocolate pigs blood pudding, creme fraiche sorbet with Oud Beersel Kriek. This dessert, which looked benign enough, sent a tremor of concern through me. Was blood going to pour out of this pud as soon as I cut it? Was this going to be a stomach turning event after this massive meal? 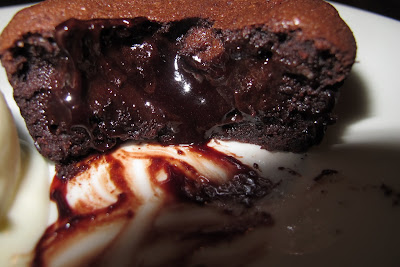 Indeed it did, mixed with the melted valrhona chocolate. I only managed half of it but others polished them off with alacrity.
The final course, Petit fours and duck live truffles came with a Dandelion Pedro Ximenez sherry which I particularly enjoyed. 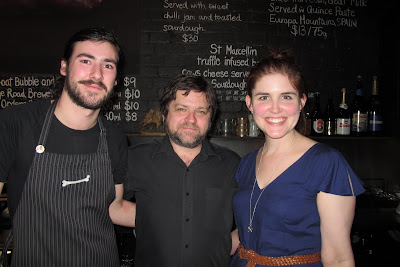 Chris Badenock, pictured here between two of his staff, is the inspiration behind this place which stands tall beside Au Pied de Cochon in Montreal, Fergus Hendersons London restaurant St. John and Prune in Manhattan.
This was a quite extraordinary meal. If a meal can be sexist this was it, very much a mans meal. The beers and wines matched the food extremely well. The courses were unusual, extremely varied and more than satisfying. They did leave a few possible bits off the menu - lung, spleen, scrotum and of course testicles. I assure you nobody missed them! 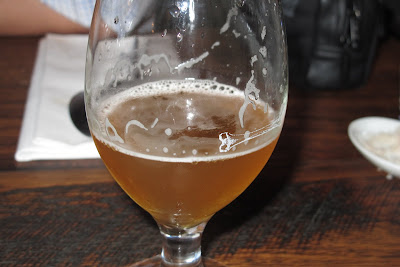 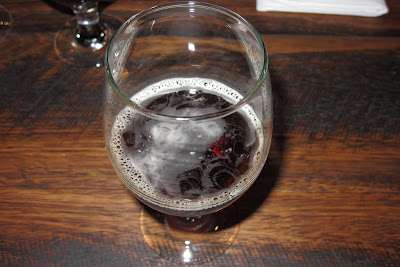 A meal that will not soon be forgotten.