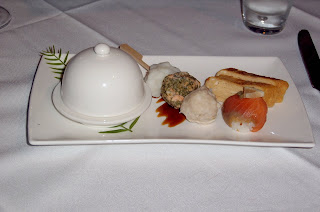 Introduction: Self promoted as "Top Class Modern Japanese" at 62 Wellington Pde East Melbourne - the site of several, previously unsuccessful, restaurants There is a Western style bistro downstairs. Three degustation menus are available pretentiouly named Regal, Royal and Imperial
Ambience: Cold, sterile and not at all Japanese. Upstairs in a darkly lit long room with mirrors along one wall. Dark grey chairs and walls white linen table cloths and serviettes. Good quality cutlery and crockery.
Service: Although only looking after two tables - 11 patrons in all, our waiter struggled to provide for us reasonably efficiently. Explanations of the difference between the $50, $70 and $90 meals did little to explain the price differentials
Food; Profoundly disappointing. There was very little about it to distinguish it as Japanese. We had the Regal menu described as 5 courses which amounted to 11 tastes.
The first course "Prelude" of 4 items (see photo) mysteriuosly named Sphere, Shield, Enshrine and Spear which were in order Smoked salmon in sushi rice, two small slices of sweet omelette, Avocado and tuna in a wasabi-mayonaise sauce, the best thing on the plate, and Tricoloured dumpling of chicken, calamari and fish. This was follwed by a Bonito soup with a few scattered vegetables and a tiny piece of bacon - pleasant enough but pretty ordinary. The third course for some unknown reason called Sculpture and subtitled Ripples was a four slivers of fresh snapper with a very nice vinegar-soy dipping sauce. The last exotically named main (Fire) consisted of Sauteed zucchini with miso sauce, a grilled prawn wih garlic butter, I could not taste it at all, and slices of chicken breast, sauteed and topped with mint mayonaise, fancifully named Mint Mountain, and a tiny piece of fresh fish marinated in sake-soy sauce and grilled until far to dry. 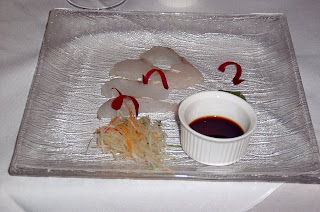 Dessert, served in a conical glass was fresh fruit salad adorned with a tiny piece of chocolate cake about 3x1x1cm.
Wine: There were about half a dozen white and red wines on their list nothing over about $40 but no Saki! I did enjoy the Pinot Gris ($30) served cold
Price: Poor value
Comments: Perhaps their greatest virtue is that all the food is Gluten and Fructose free At the end of the meal most of us were still hungry.
Score: 12.75/20
Posted by Elliot and Sandra at 11:33 AM

persoanlly, i wanted to go to KFC to fill up

The review isnt suffiently scathing. Howewever, the service was very polite and unpretentious-although the waiter knew too little about the food in the menu