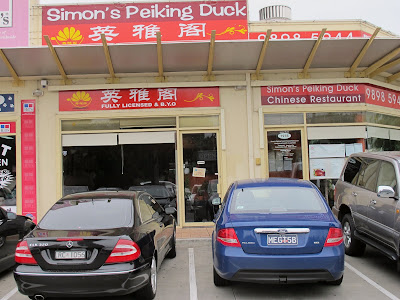 If you spell Beijing with two i's why not Peiking? Who knows but that's how Simon Lay has chosen to spell it in the name of his new restaurant. After four years of retirement from Old Emperor, which he fronted for some 20 years, this 'Charles Bronson of the East', 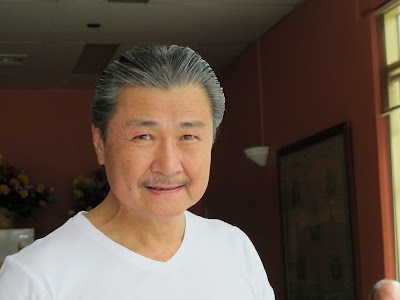 is up to his old tricks, making fun of everything, including himself, with all the energy and humour for which he is famous.
More renowned than this, however, is his Pe(i)king duck. My italics.
Peking duck is not a simple herb spiced roast duck. It may even be deep fried. It's preparation includes being stuffed with special herbs, having the skin pneumatically lifted from the body of the duck and having additional herbs inserted, blanched and marinated for 24 hours before being cooked to produce the special taste that distinguishes it from other crispy skin roast ducks.
Simon presents his Muscovy ducks at the table cooked to a glorious tan. 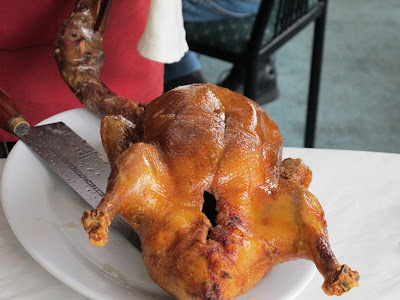 The skin is crisp the duck moist with a minimum of fat. 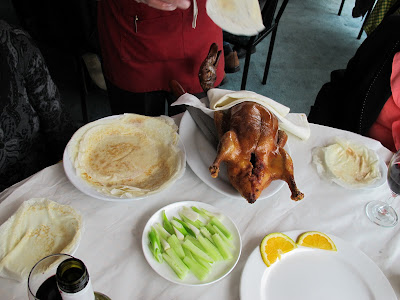 Plates of spring onions and cucumber and plenty of plum sauce accompany a stack of paper thin pancakes which Simon separated and, Frisbee like, lofted on to our waiting saucers 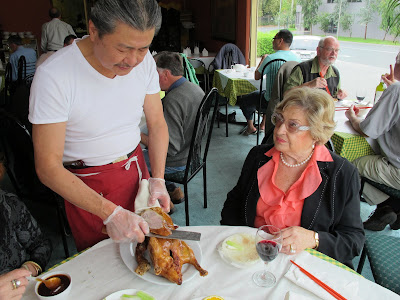 before carving the bird. The bits unsuitable for wrapping, neck, wings and some bones were left in the centre of the table. It was do it yourself from then on. 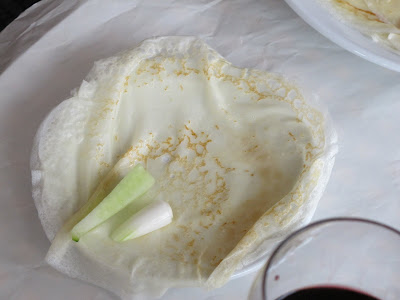 A pancake ready for the duck. 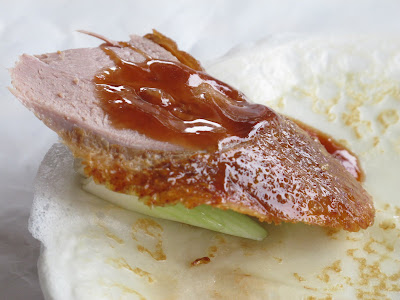 A hefty slice of duck with plum sauce ready to be folded into the pancake.
One duck for two people was more than adequate. 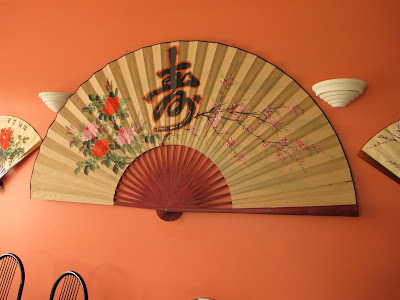 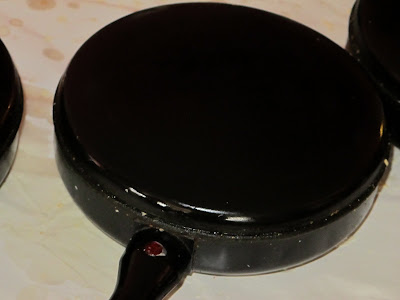 which they oiled, dipped into a watery batter for a moment, cooked for about 30 seconds 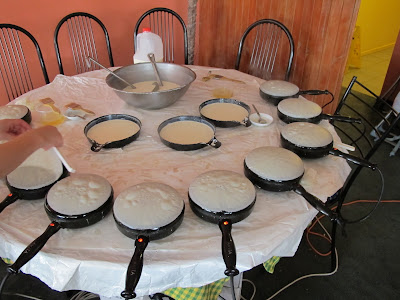 before turning them for a further few seconds and 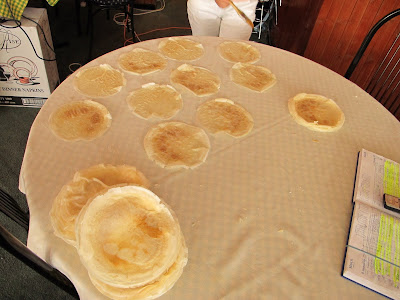 then removed to cool. They then lightly oiled them before stacking them in piles. 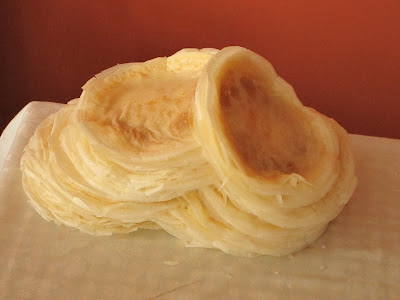 There are close to 100 in this stack.
We also took the noodle option, thick, thin, rice or hand pulled for an extra $8 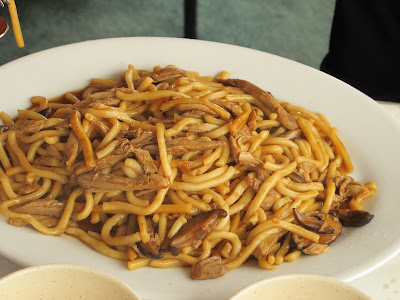 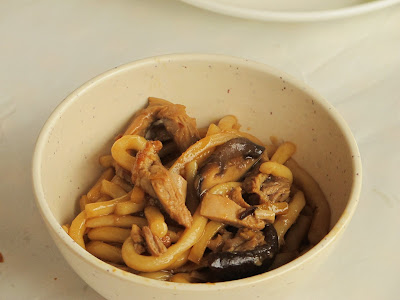 with mushroom and plenty of duck meat.
The last course was a very good duck soup with some silken tofu. 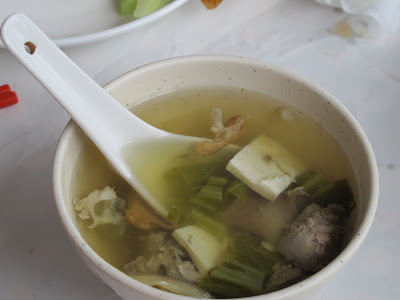 The star anise and five spice and pickled vegetables gave it an especially oriental flavour. Well what else would you expect!
There are two things of which you should be aware. It is wise to reserve a table and let them know how many ducks you want a couple of days in advance, after all if you come for duck you don't want to end up with the a la carte menu AND 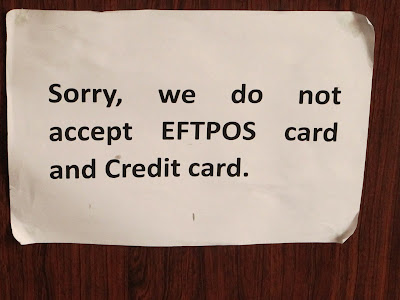 they do not take EFTPOS or credit cards.
The basic Duck is $55 or $63 with the noodle option.
It is easy to see that we were not the only ones to enjoy the very pleasant 2008 White Box Heathcote Shiraz. 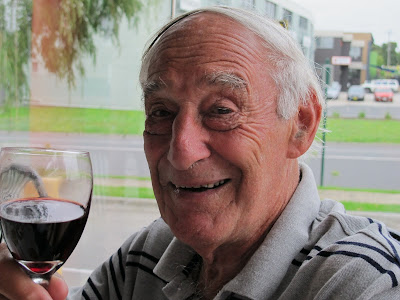 Wine is extremely inexpensive.
Simon's is a sort of every man's restaurant offering a taste of the real thing with a signature Chinese specialty dish. Whilst we thoroughly enjoyed our meal I felt the the taste of the herbs in the duck were very diminished and the slices were much thicker than I would have liked.
Without deciding the relative importance of these things we might score Ambiance 7.5, Service 6.5, Noise 6, Food 7.5, Presentation 7, Returnability 6, Value 7.5 all out of 10
Score:14/20

Posted by Elliot and Sandra at 8:30 PM

I'm sold on Simon's ducks and think it's one of the best in Melbourne. He's also such a funny guy. As for the spelling of Peiking, I think it used to be spelt that way about 20 years ago before getting changed for whatever reason. The correct way is probably to spell it with the i as the Chinese pin yin would be written that way.

Hi
I think the other end of the scale for Peiking duck is Quanjude where they use special ovens in which the ducks are roasted hanging so the fat can drip out of them. They have chefs from China, they spoke no English when we were there. After removing the breast skin in thin slices they carve the meat also in fine slices.
I did take some of the duck home and next day found it seemed to have an improved flavour. Quanjudes pancakes were very good but not as good as Simon's It is, of course a much more sophisticated place but if I was an investor I back Simon he has what it takes to succeed

I've been a Simon fan for many years... I prefer having actual duck meat in peking or Peiking duck - not duck skin. Recently having moved to Brisbane, all they seem to give your for Peking duck here is skin and fat with if you're lucky a sliver of meat. Simon - please move to Brisbane!

Hi Anon
There are no rules but there is tradition. As we understood it you get the whole duck when you have a Peiking duck meal. What's left after the skin and meat have been carved off the bones is used to make a duck soup and what's not used for that isreturned to the table for guests to finish if they wish.

Hello,
NIce blog i like it
thanks for this kind information.