The entrance to this highly regarded regional restaurant, which has featured in the AGFG for almost a decade, and is currently rated 30th by Gourmet Magazine in Australia's top 100 restaurant, is through an impressive very large wooden door down the side of this former bank building. 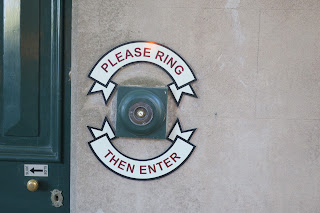 Spread over a number of rooms it retains something of the grandeur of the original building with  a combination of wide square doorways, 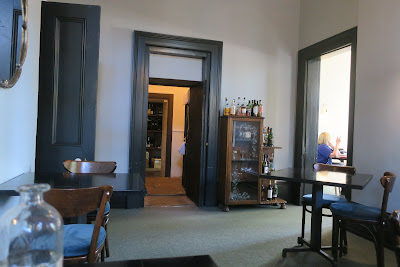 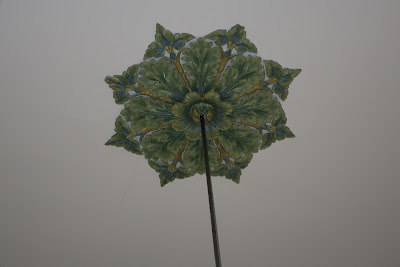 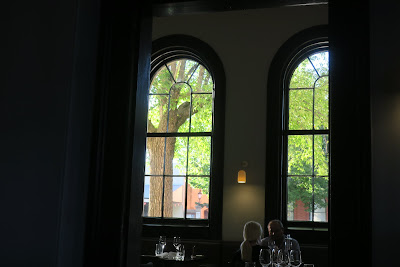 Table are bare with simple settings.
The chef offers á la carte or a tasting menu. $125 for six courses with some extras available. Matched wines add $75 or $125 for premium wines. They have an extensive wine list with a good range of sake which fits their Japanese influenced menu.
I was pleased to see a glossary of sake terms included in the wine menu. 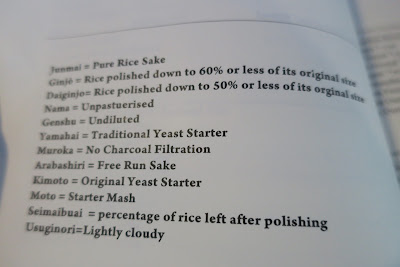 The wine menu is extensive with some concentration on the region but I elected to have sake which was beautifully presented. 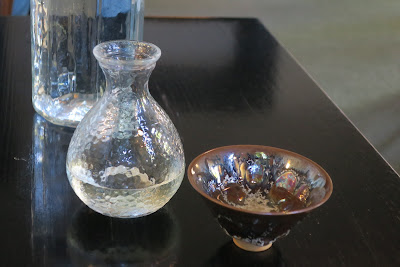 A very much to my taste house made sourdough bread was served early with a cold smoked creamed butter. If you like that sort of thing this was out of this world. My mouth waters thinking of it. 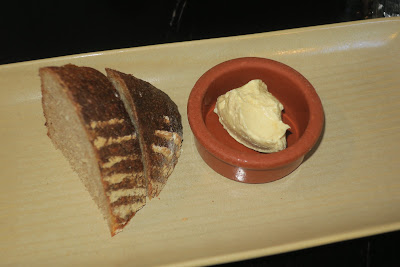 I skipped the optional starter of home made silken tofu dish with cucumber, ginger and kiriboshi but added a garfish with its grilled bones. 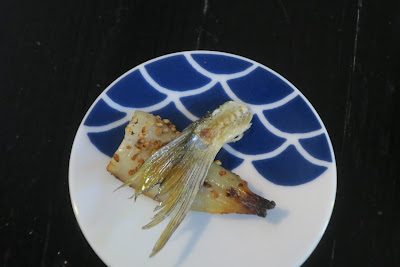 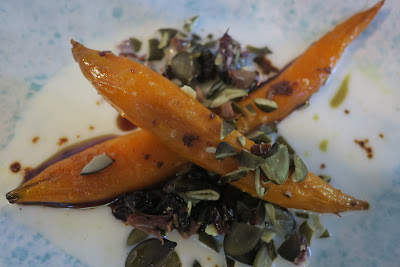 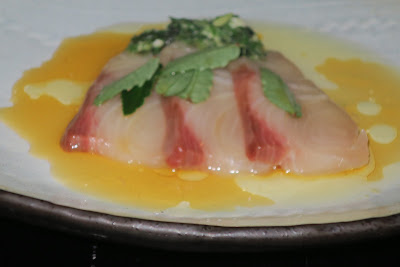 The kingfish was as it always is with an interesting contrast with the citrus tasting sauce and the sweetish pickles.
Smoked wallaby tartar, Japanese fish sauce and egg yolk dressing, cured mullet roe 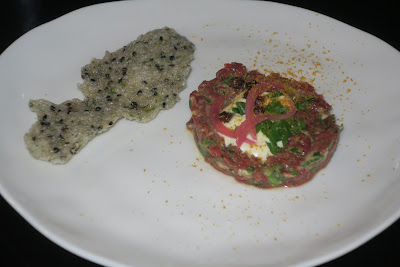 was a benign sort of dish, pleasant and inoffensive as long as you find raw meat to your taste. It was well balances so nothing dominated.
Free range duck, beetroot, pickled cherry (which had then been dehydrated), umeboshi 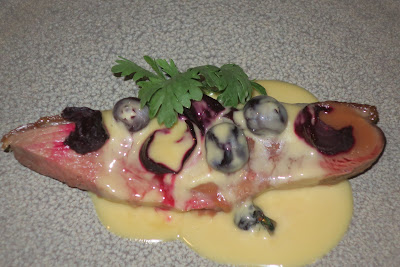 was another very appealing dish however a small fly managed to get into the sauce. I moved it to the side of the plate and called the waiter. He quickly removed it and offered to replate the dish. I said it was Ok so he didn't do anything more. I believe that, in any quality establishment that would have been unacceptable and the dish would have been removed without allowing the customer to continue with it.
Tri Tip, silverbeet, Café de Tokyo butter, presumably the chef's joke, a variation on Café de Paris butter 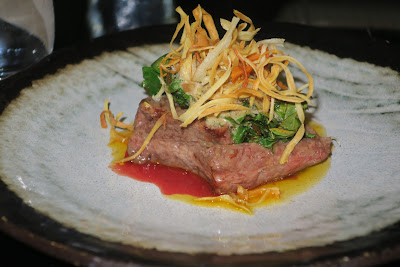 was exceptionally tasty although it had quite a lot of gristle in the meat.
I skipped the optional cheese dish and went on to dessert.
Leaves from the garden, raspberries on a cream base behind sheets of meringue. 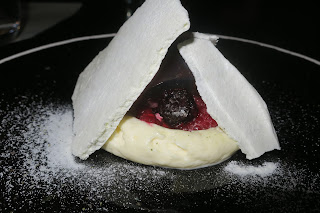 A pleasant dessert.
This was another of those unique meals. I suppose in a way every meal is unique but some are more so. As such the are hard to compare to other unique meals. The dishes were very interesting. They were not over the top with a myriad of ingredients. The hero of each dish was made more interesting by its accompaniments, never dominated by them. I very much doubt, as good as it was, that it belongs in the top 100 restaurants in Australia but it certainly is a very good restaurant.

Nice information. Also, Ringwood has the highest concentration of hotels in Australia and there are excellent pubs and restaurants to delight everyone.