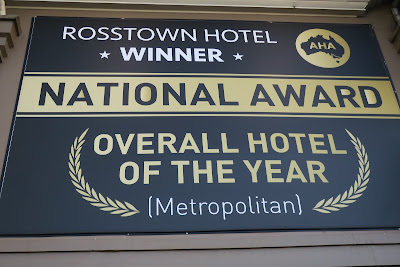 We used to come here quite frequently and I am surprised that we seem never to have reviewed it. We especially liked their grilled flounders which were substantial, and the self serve salad and dessert bars. It's a pub restaurant and used to have the typical large blackboard with the menu options over the kitchen servery where orders were taken and one took a table number. 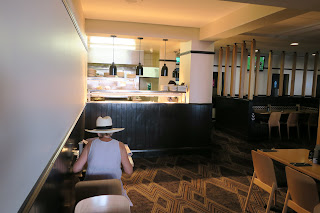 That's all changed although the room is as before there is now a number on each table and orders are placed at the bar. 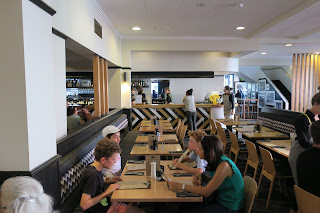 Drinks are also ordered at the bar on a separate tab to the food. A waitperson
then delivers the dishes to the table.
We started with a mushroom soup which needed the addition of the greater part of a glass of water to get the salt level down to acceptable. Even the crunchy bread was salty. 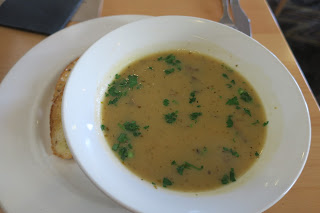 It did have some mushroom in it - I could see it but I couldn't taste it.
The main act was the traditional grilled flounder, described in the menu as big, perhaps to justify the $39.50 price tag. It came with one side salad, vegetables or chips. 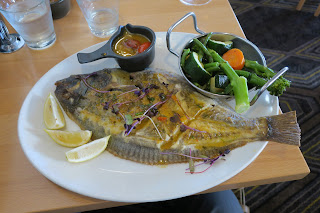 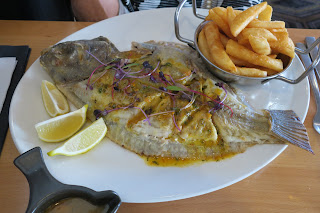 Regretably it also came drenched in a sweet, fresh tomato sauce, with an extra little pot if you wanted it. We had asked for tartare which was forgotten. When we did get it it was also surprisingly sweet too!
Vegetables were crisp, which I like and very coarsely cut which I don't like. The medium size fish was good but spoiled by the unavoidable dressing. Chips were unexceptional.
I stole a snap of a hamburger at the next table. 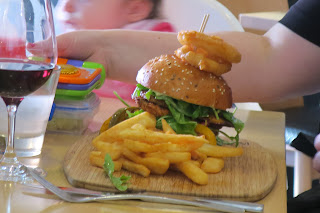 Topped with onion rings that looked pretty good, I didn't ask though. Unfortunately the Bistro did not live up to expectations. In fact, for us it was an awful meal and prices are only little below those of much much better restaurants. The Hotel of the Year award is undated, I wonder when they got it. It certainly is no gastro-pub.
Score: 13/20
Posted by Elliot and Sandra at 3:51 PM