I don't much care for basement restaurants that rely on you knowing their address to find them without the aid of signage. The last one we went to, a few months ago, was the Michelin star Kyo Ya in Manhattan. ( http://1001dinners.blogspot.com.au/2017/02/kyo-ya-east-village-manhattan-012017.html ) I was very uncomfortable until I found the entrance there but it was well worth it.
Ôter also has no signage. It is a French word with a general meaning to remove or take away although it can be used in many senses as can the English expression for example in arithmetic 10 take away six equals four or in making nonsense of something, taking away the sense of it and so on. In gastronomy I find it a bit of a stretch perhaps being used in the sense of getting down to the basics, taking away the unnecessary. Make of it what you will. Certainly the venue is pretty basic and so is the table setting 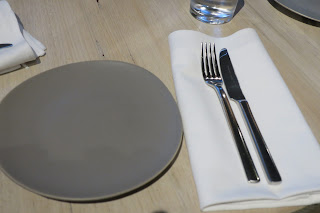 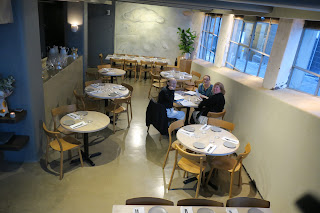 Menu's are very hard to interpret so, as usual we chose the chef's choice of five courses ($95)
Bread was excellent, served with radish, Murray river salt (I think)and butter. 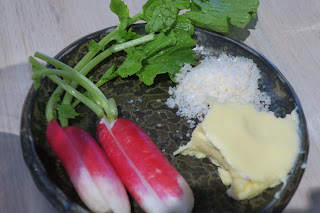 Our first course was mussels with leek and sea weed. A tiny serve, the mussels cut into small pieces, it was rather bland. $4 on the menu, as was the next dish.
Chicken wings and hot sauce. 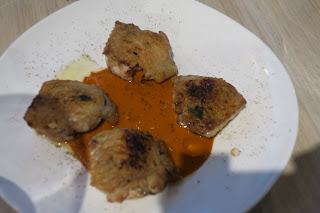 Another tiny serve, the mouthful of chicken, one per person, was succulent and the sauce not palate destroying hot but oh so little.
This was followed by Red Emperor crudo, buttermilk in dill oil. Clearly Japanese influenced but failed to excite. The fish had not been sliced the way a Japanese chef would do it and the dill was almost undetectable in the oil. 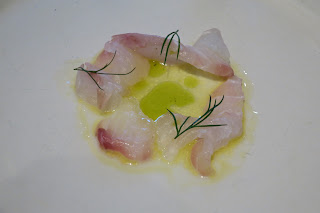 Next we were served braised eggplant, almond gaspaco, I always thought that was a Spanish soup, with espelette pepper. 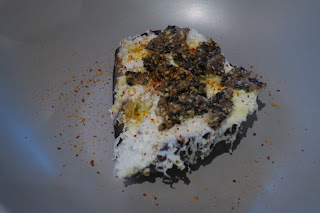 This was a truly boring dish with no almond taste at all and only saved a tiny bit by the crunchy texture of the little bits of sesame biscuit on top.
The next dish was flounder with spinach, lemon puree and champagne cream. 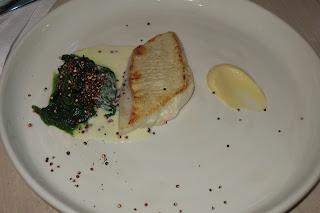 This tiny fillet, you could easily get eight of them of one fish, was served belly up to two of us and belly down, black skin, to two of us. The texture of the fish is different on each side and we should have all had the same thing. It was nicely cooked but the champagne sauce did nothing for it. Just OK but again a small serve.
Korobuta pork neck, confit celariac, lardo 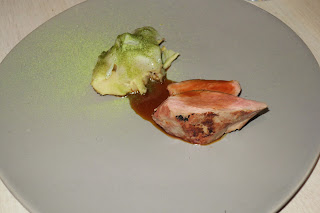 also came with an indifferent sauce. The neck was tasty and I enjoyed it although others at the table were indifferent.
The last course was an opera cake which we had to share, two slices for four of us! 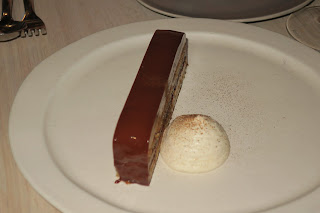 It was the best course of the meal but a mean serve.
Service was pleasant but our waitress could not make herself understood and we had to resort to looking at the menu so see what we were eating.
Tea and coffee, they only have espresso or long black! came in two parts - one coffee arrived 10 minutes after the other drinks!!
Wines are heavily marked up. We did enjoy a Dalwinnie 2013 shiraz ($120) 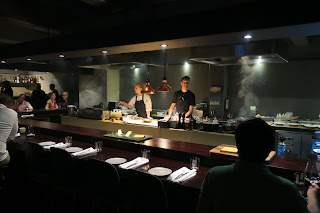 Comments. Unfortunately, for us Ôter left out a lot to be desired. There was no Wow factor to be found.
Score: 13.5/20
Posted by Elliot and Sandra at 12:02 AM