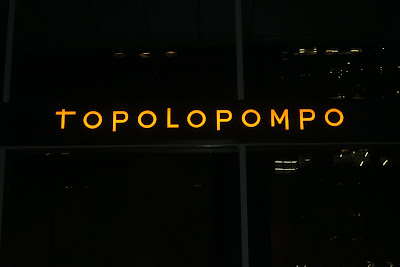 Gil Hovav, an Israeli journalist, author, publisher and food blogger refers to this restaurant as one of the three most interesting in Israel. Unfortunately he also calls it the most expensive cheap meal you can get!
Tomolopompo it seems is the name of some mythical Asian dragon and fire is a predominant feature in this restaurant which features a large BBQ at one end of the kitchen 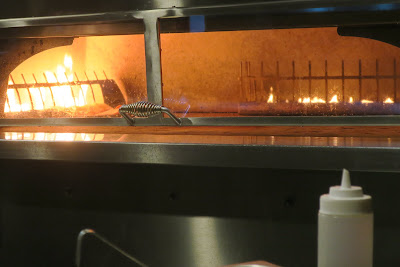 This is what we experienced.
Aware that there were several dining areas we requested table '600' a table for four that looks over the plating area, often called 'The Chef's Table, 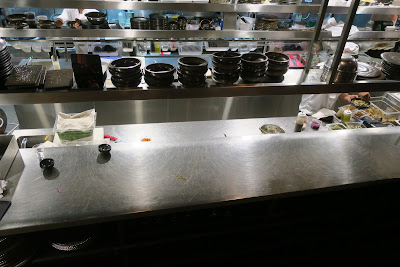 and were pleased to be able to see them preparing dishes. 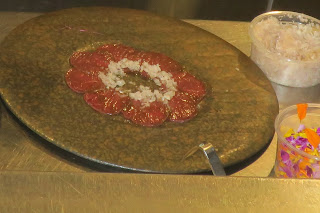 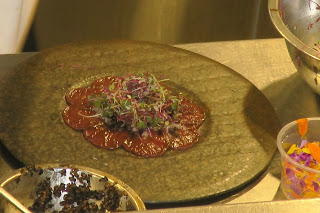 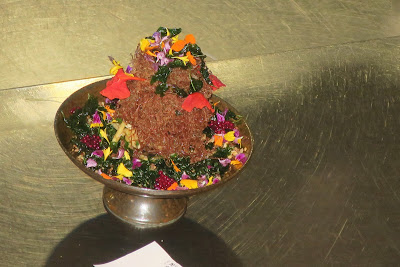 On entry there is a small dark bar on the left 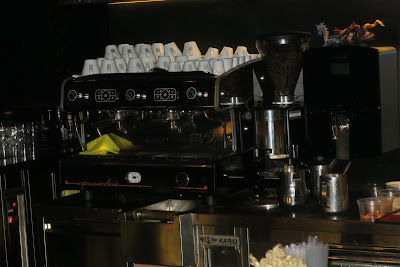 and a long common table facing it and the kitchen at the other end. 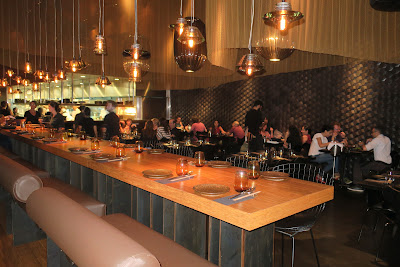 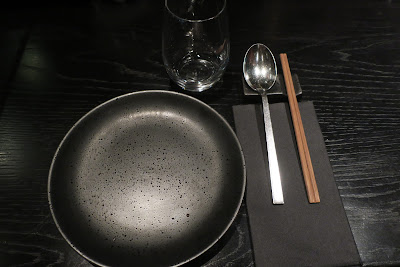 Cutlery and glassware are good but not exquisite.
After being seated a waitress explained that, apart from the extensive à la carte menu they offer she could design a degustation menu for us, taking account of any food restrictions or allergies we might have, and this could vary for each of us! Including their signature dish that would be 400 NIS, about A$160 per person. Drinks, of course, would be extra. That sounded excellent and saved as struggling with the extensive menu with four different opinions about every dish.
First came a variation on taco's. Two good bite size crisp 'taco's' filled with (I think,) some crisp fine cut fresh vegetables and raw fish and herbs with a slightly a slightly sweet dressing. 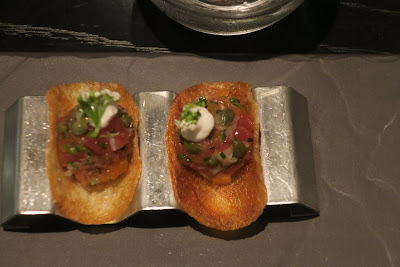 This was accompanied by a sashimi dish. 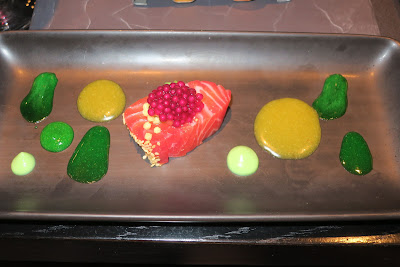 The super fresh salmon, surrounded by three varieties of sweet wasabi sauce as well as a mild wasabi, was covered by some little red spheres which looked like miniature pomegranite seeds. Actually they were tapioca!
Our next dish was a variation on spring rolls and san chao bao, served with lettuce leaves, mint, crisp fried shallots and a sweet sauce to make a sort of lettuce roll. 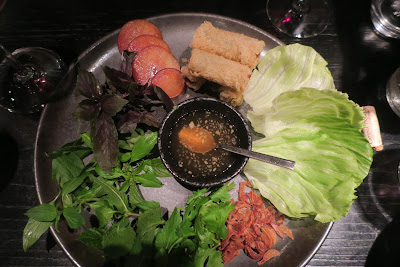 Two salads, one a vegetarian salad, 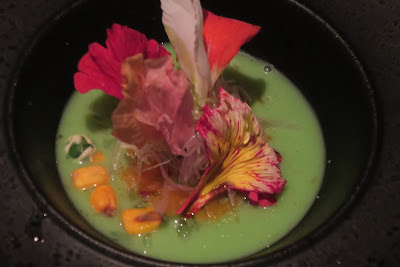 and one with some protein, which sat on a bed of yoghurt. 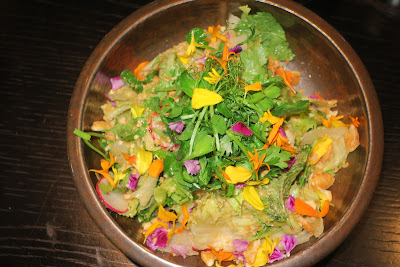 The last small course was a corn dumpling which sat in a light corn/mushroom sauce. 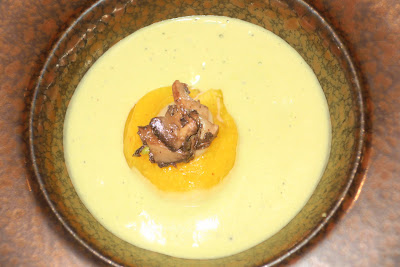 This was stuffed with three sorts of corn and had a few mushrooms on top. Next came the main course, 1.8 kilo of lamb shoulder slow cooked until it was falling off the bone and then finished on the BBQ with a Hoisin sauce. 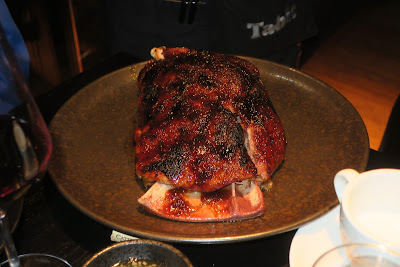 A large platter with small plates of condiments, including hot chili sauce, kimchi, a sweet bean sauce, bean shoots, spring onion and herbs and a bunch of lettuce leaves surrounded a bamboo steamer 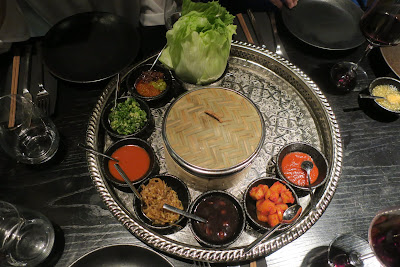 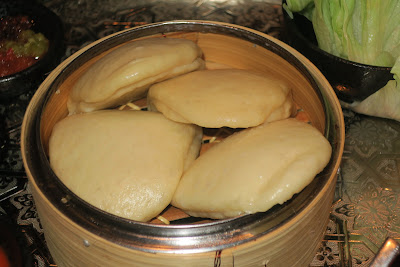 Another do it yourself dish it was easy to create whatever might most appeal for each individual. 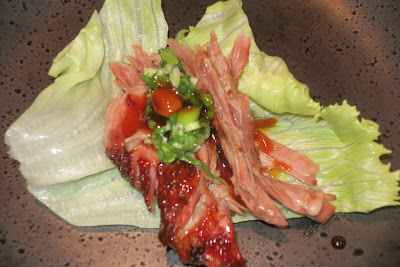 We were presented with some chocolate balls to eat in one bite. 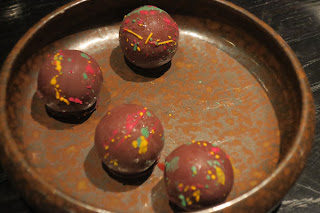 Just as well, They were filled with an indefinable palate cleansing juice.
There was a choice of desserts. We tried the three chocolate one.
Thin leaves of chocolate formed a palisade around a ball of chocolate which also contained a mousse. 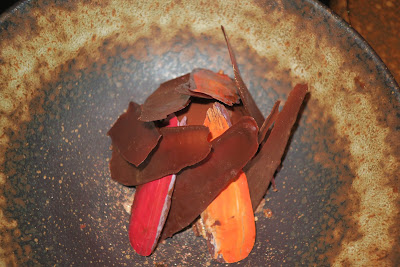 A pineapple creation covered in a web of spun sugar 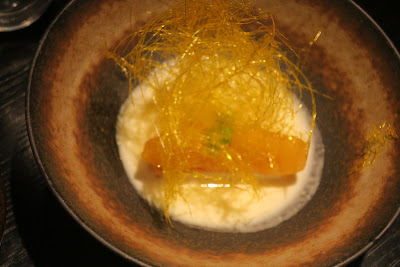 was another option.
We, and our cousins, 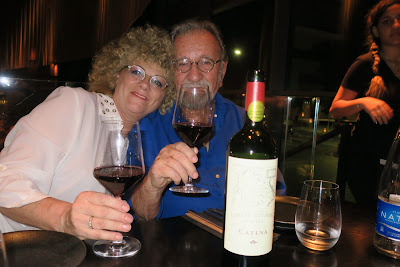 drank an Argentinian Malbec (A$85, which retails at about A$20 a bottle) one of the least expensive options on the menu. We all enjoyed it. They had some cocktails but no wine by the glass that I noticed.
Where the food was concerned this is one of the best restaurants we have ever eaten at in Israel. It was marked by delicacy and a subtleness of flavour which is rare. Furthermore it was inventive, beautifully presented and tasty. Service was not obtrusive, pleasant and efficient. Explanations were clear and requests were acted on. The venue is pleasing but the level of the music and it's rhythms were disturbing.
Price wise, by international standards, we did not think it expensive.
Score: 17.5/20 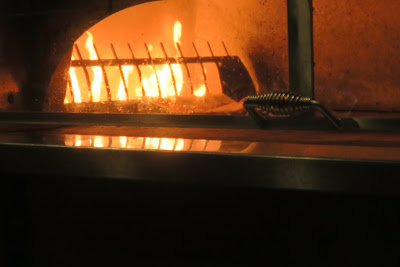