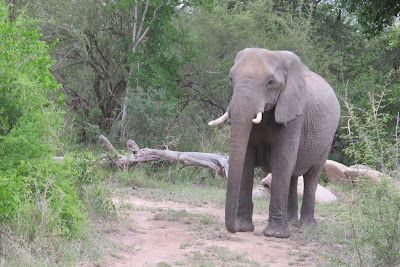 Tinga is a private concession in Kruger National Park. They have two lodges, each with nine cabins which consist of a huge room with a bed which seems to be a bit bigger than king size. Moving around the room from the entrance on the left there is an eight foot long desk then on the side wall a large cabinet with a very well stocked refrigerator with free drinks and a tea/coffee making facility. Moving to the next wall there are about 10 metres of wall to ceiling windows that look out onto a private pool, a large balcony furnished with recliners, table and chairs. The whole lot looks over African bushland towards a river. Just looking out the window we have seen elephants, a hippopotamus, a lion chasing an impala and many colourful birds. On the next wall are cupboards and room for cases. On the next wall, which is right of the door, we come to the bed which is surrounded by mosquito netting and has an overhead fan. They also have two very effective Carrier air conditioners. This room leads into a large circular shower space with two separate showers with windows facing the bush .Adjacent there is a big bath and a double sink, vanity and wash area and a separate toilet and bidet. The tariff, about $750/ day includes all meals, and there is a ton of good food which I will come to soon, and six hours of game safari rides per day in well equipped Land Rovers with a skilled tracker and a guide. This was our tracker, Emmanuel. 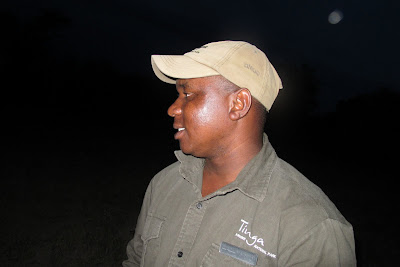 The routine is a 0545 start after a drink and a biscuit. After a couple of hours we would stop for a snack 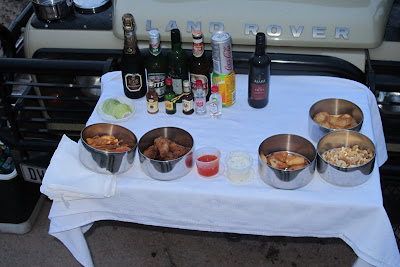 and then continue until getting back to the lodge for breakfast at about 10 am. Lunch is often a buffet from 12.30 until 2 pm and dinner is from 7.30. Most guests retire by about 10pm. Meals are taken either under cover or in the open depending on weather and personal choice. House wine is gratis

Breakfast This is a simple affair with some cereals, fruit, cakes, and drinks. Adequate. We barely seem to have finished before it’s lunch time. This varied from buffet to a sit down meal. A typical menu offered two choices of starters, for example chilled gaspacho soup which had me scrapping the bottom of the plate 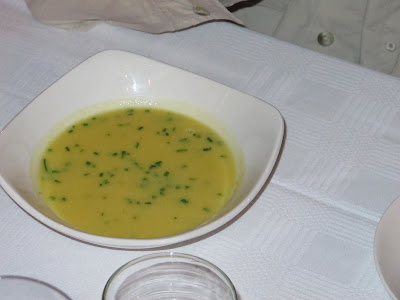 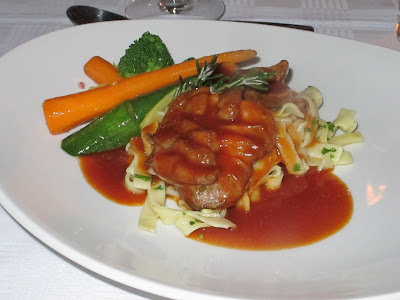 Desserts on this occasion were seasonal fruit or milk tart 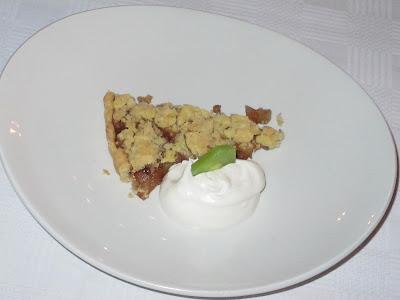 or a cheese platter 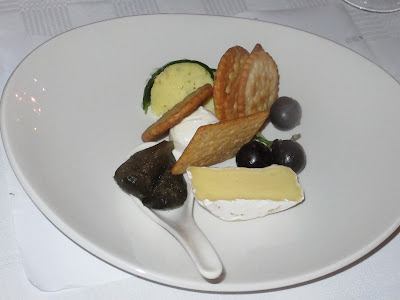 . On another day there was a warm pea and mint soup or grilled pear salad with deep fried haloumi for starters. Mains included grilled baby quail with morongo phyllo parcel and sherry sauce which I had. It was remarkably tasty, there was plenty of meat on the quail which was great with the sherry sauce. The phyllo pastry bag was a nice surprise too. 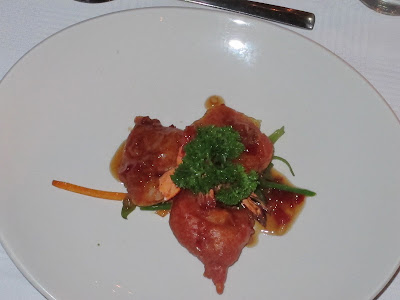 Dinner was not dissimilar but they put on a special one for X’mas eve. Here starters included Vichyssoise soup with chopped chives, a tri of crostini, smoked salmon, marinated crayfish, smoked mussels with lemon essence. Warthog carpachio, which was similar to beef, with mushroom and parmesan shavings or nectarine and goat’s cheese salad with mint aioli. Mains were rack of lamb with rosemary crushed new potatoes and ratatouille, chicken supreme wrapped in Parma ham with carrot puree, sherry jus and red cabbage, fillet of Kingklip with sesame crusted prawn risotto, green beans and bisque sauce which was a super dish, or spinach ricotta cheese ravioli with burnt sage butter. In this particular dish there was a shortage of Parma and they substituted quite a lot of it with pumpkin which was not as good as it might have been. Desserts were a berry cheese cake,lemon meringue, mascarpone pannacotta, caramelized orange and almond tuille or fresh fruit.

We were astonished at the quality of the food here. Chef Teddy told me that she spent a year in a cooking school and worked for some time in a restaurant. The range of dishes she produced every day and the quality of the cooking is beyond my imagination. Her variety of sauces, of cooking styles and of menus produced in an very simple kitchen are a tribute to her skills.