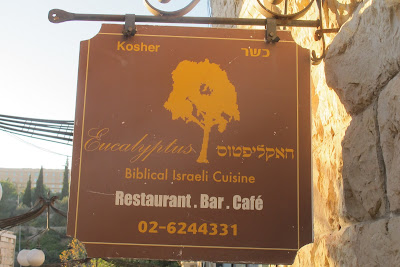 Having a long standing interest in biblical food and finding ourselves in the land of the bible we looked for the sort of restaurants that served the food of our forefathers. Surprisingly we could only find one restaurant in Israel that fitted the bill. Even more surprising was that the owner, Chef and host, Moishe Bassan had been to Australia, and many other countries, lecturing, demonstrating and cooking biblical food, which is the passion of his life.

When we entered the restaurant Chef Bassani was explaining the nature and character of herbs that he used in his dishes to a table of patrons. Soon after we were seated he reappeared banging a metal tray and carrying a large metal pot inverted on another tray. Ceremoniously he invited a guest, from a table of Chinese diners, to don an apron and Chef’s toque. He then explained the ritual of passing your hand over the pot seven times, making a wish and then, after rapping the pot, lifting it by handles on each side, like removing a cake tin, to reveal the contents. A cloud of steam arose enveloping the room in a wonderful aroma. Like a magic trick we were transported to another time. The dish revealed, as the steam lifted, was a braised casserole of chicken, rice, onion, tomato, potato and carrot with herbs and spices. 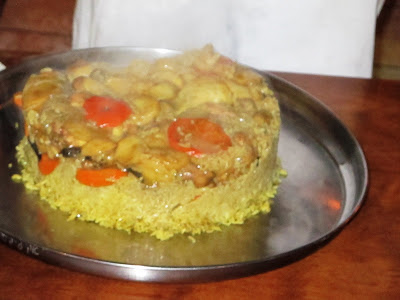 The carrot, potato and tomato lining did not release from the pot and Chef smacked his lips and said “That’s for me”. The recipe for this dish is at the end of this review.

Entering this cave like venue, with its subdued light, added to the feeling we had slipped back in time.The first thing to come to the table was a ceviche of yellow fin tuna and bulghar wheat with a couple of deep fried, crisp, bread sticks. Not a biblical dish but I will discuss this later. 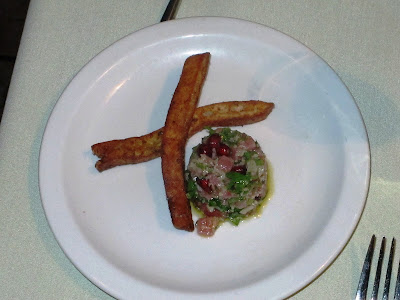 Three small dishes of dips, tahina, coriander and zatar with some small bread rolls. Zatar, a mixture of hyssop, sesame seed, olive oil and salt, is the biblical name for Hysop which is often mentioned in the bible. “Purify me with Hysop and I shall be clean” Psalm 51:7 Our attractive waitress, Natalie, who was Bassan’s neice, explained the need for caution where the bread was concerned as there was a lot of food to come, and there certainly was! She need not have worried, the rolls were not very tempting. A piece of warm pita might have been better. 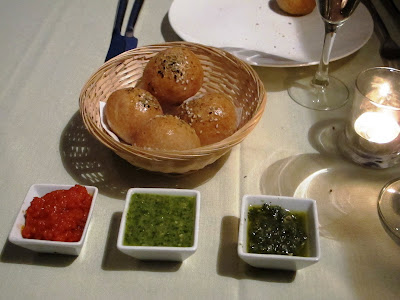 Three small plates followed with a beet salad, a carrot salad and an Israeli salad These pleasant dishes mimicked the almost universal approach to meals in Israel which invariably begin with plates of mezze. 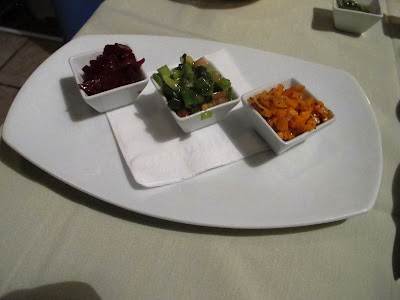 This was followed by a trio of soups, Jerusalem artichoke with almond milk, a mixed vegetable carrot soup and a lentil soup, three great tastes. 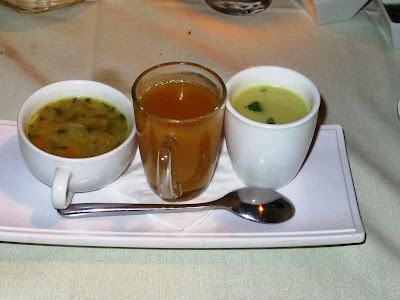 A small flat topped pyramid of rice was surrounded by a vine leaf stuffed with minced lamb, on a garlic clove, a cabbage leaf stuffed with tasty rice, with a slice of lemon and a signature dish of figs, stuffed with chicken, in a tamarind sauce. The tamarind sauce was very intense but the stuffed figs were superb. I have included a recipe at the end of this review. Each part of this dish was so good we could have had a meal from any part of it. 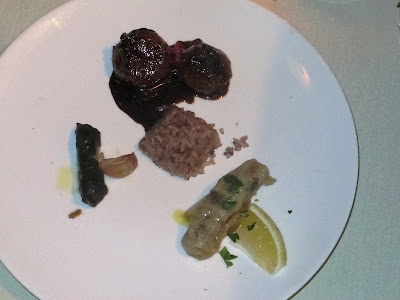 Another small plate of mezze arrived with chick peas, smoked eggplant and beans topped with tahina and something I could not remember. 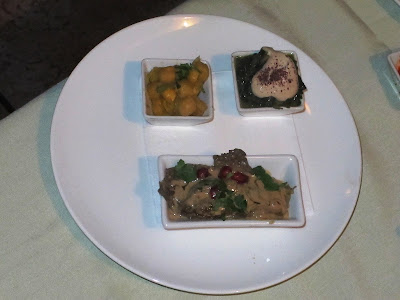 Everything was mild in flavour and well balanced. There were no clashes or jarring combinations. Chef Bassan wears a necklace of dried ochra, which Sandra loves, I would normally avoid it. Here with veal kofta, tomato sauce and a little coriander it was a combination of gently spiced textures that I enjoyed. 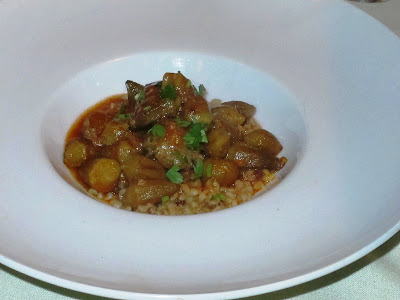 There was a short interval while Sandra did the honours blessing the chicken before it was served up to us on a large plate to share. 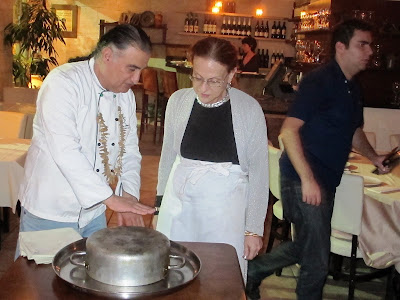 The lid was lifted. 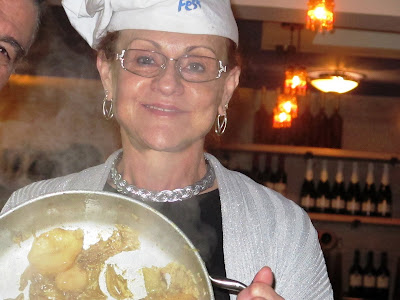 I took only a small serve! 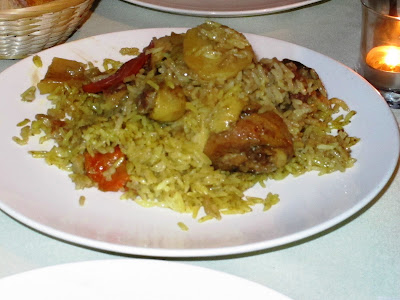 The tastes that seeped into this dish are out of this world. There could be no better way to prepare a rice and chicken dish. If this is what our ancestors ate they would be very fortunate.More meat dishes followed. Beef with eggplant in a sweet sour sauce came with a small pyramid of their prize winning and Internationally renowned seven vegetable cous cous. The meat was a little fibrous, the cous cous excellent. With several courses to go we became cautious about eating too much. 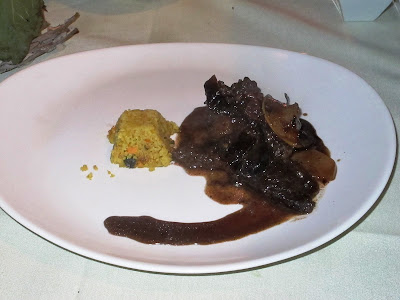 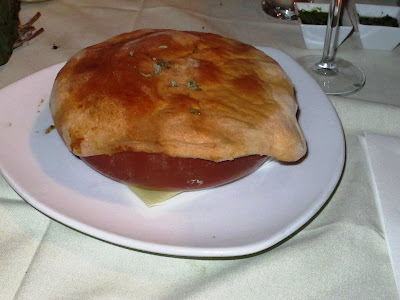 Under the pastry there was delicious baked lamb and vegetables oven baked in a clay pot over night. 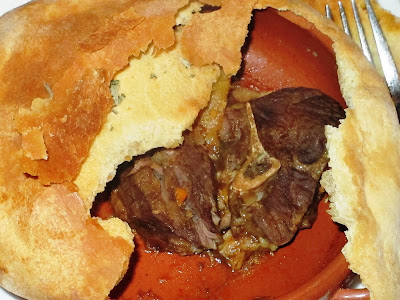 Finally a trio of sweet things, the dessert plate, completed the meal. 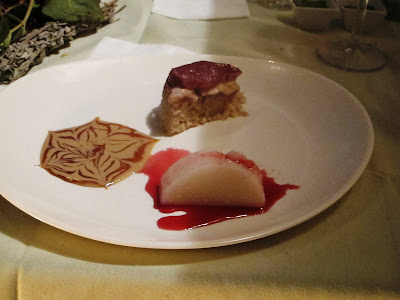 A ceviche of yellow fin tuna and bulghar wheat with a couple of deep fried, crisp, bread sticks. Not a biblical dish but I will discuss this later.

The jelly on the right was made from an ancient plant, with a rose water flavoured syrup, the flower pattern was a halva cream and the third item was a small cake.

Chef Bassan was an extremely cordial host who spent a lot of time chatting with guests and explaining aspects of biblical produce. Here he is in animated conversation with Sandra. 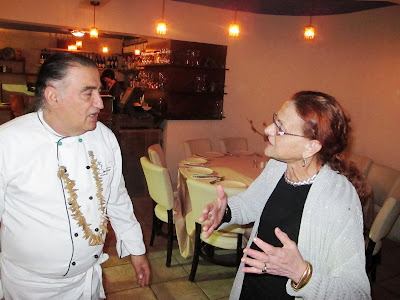 He does not limit himself to solely biblical products, for example eggplant, yellow tuna, potatoes and tomatoes came to the Middle East from South America.

Several of these dishes derived from his mother’s kitchen. The service had a very friendly family atmosphere added to by other members of the family who were also working in the kitchen.

Apart from the 15 course Song of Songs tasting menu (NIS250) there is a 12 course menu (NIS197) King and Prophets’ and King David’s Feast of seven courses for NIS177 or an a la carte menu is available.

It is very difficult to mark a restaurant like this, which is constricted by the ingredients that could be used.

1.
Dice 2 onions, and place them in a large skillet with 2 tablespoons olive oil. Sauté over medium-high heat for 5 minutes.
2.
Using a meat grinder or a food processor fitted with a steel blade, grind or pulse chicken until finely diced. Add chicken, cardamom, cloves and salt and pepper to skillet, and continue cooking over low heat until chicken is lightly browned. Adjust seasonings, and remove from heat.
3.
Mix tamarind concentrate with 4 cups hot water in a large saucepan, and bring to boil. Add 2 diced figs along with brown sugar. Reduce heat, cover, and simmer for 5 minutes.
4.
Core remaining onions from bottoms up, leaving tops intact, removing all but a few inside layers. Stuff them 3/4 of the way full with chicken mixture. Close hole at bottom of onion with a small piece of onion from core. Place stuffed onions in pot with tamarind sauce. Cover pot, and bring to boil. Reduce heat, and simmer for 30 minutes.
5.
Meanwhile, in a large skillet, brown eggplants on all sides in remaining tablespoon olive oil. Remove from heat, and allow to cool for 5 minutes. Make a slit in one side of each eggplant about 1 inch deep and 2 inches long. Carefully open, and scoop out seeds, making a pocket large enough to hold about 1/4 cup chicken mixture. Stuff eggplants, and add them to onions in pot. Cook covered for 30 minutes more.
6.
Open whole figs from bottoms up, and remove seeds. Stuff with 1 tablespoon chicken filling. Add figs to pot with onions and eggplants, and simmer for 10 minutes. Serve one stuffed fig, one eggplant and one onion to each person, with sauce drizzled over all three.

How to make it

Posted by Elliot and Sandra at 3:25 AM

How interesting this looks, but what did vegetarians eat back in the biblical days? Love to Sandra