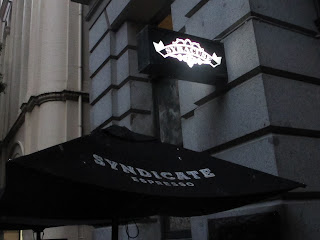 In the last part of Sandra's Master of Arts in Gastronomy she did a long paper on the move towards savoury in desserts, the place of umani in modern Western cooking and the process by which chefs develop new dishes.  As well as reviewing masses of literature this involved interviewing dozens of chefs. All gave generously of their time. Several of stood out in their deep knowledge and thoughtfulness or because of their approach to the questions. Philippa Sibley

was one of them.
We have, unashamedly taken some of the photographs and information about Syracuse from their site.

Phillipa has, to coin a phrase, a wonderful pedigree.
Her cooking career commenced in Melbourne in the late 1980‘s with acclaimed chefs Stephanie Alexander and Tansy Good. Her fate as a pastry chef was sealed by work in London at Le Gavroche, Est, Quaglino’s and Harvey’s (with Marco Pierre White) followed by her appointment as Chef de Partie at three Michelin star La Côte Saint Jacques in France. Back in Australia in 1996, Philippa opened est est est, followed by Luxe in 1998, and then Ondine in 2001. All three restaurants collected three hats in The Age Good Food Guide, and est est est and Ondine the coveted Best New Restaurant award. Her work at Ondine earnt (sic) Philippa The Age Good Food Guide Chef of the Year Award 2004. Philippa’s has cooked in some of Australia’s finest restaurants, more recently, as first Executive Chef at Albert St Food & Wine (awarded a hat in The Age Good Food Guide) and then at Prix Fixe, in Alfred Place, Melbourne. Philippa was Time Out Melbourne’s Chef of the Year in 2014

Philippa is co-author of the “Marriages est est est cookbook” published in 1999 (when est est est was described by the New York Times as “the restaurant of the moment”). While dessert junkies’ prayers were answered by Philippa’s second book, “PS Desserts’ (published in 2011), her third book,”New Classics”, puts a PS contemporary mark on savoury and sweet classics

Syracue's dining room evokes a wholly other time and place.

Originally an hotel and then a bank the ornate archways, soaring ceilings and curving chandeliers of a 19th century hotel lobby create a stunning impression of grandeur, though soft lighting and an assortment of antique tables and chairs keep the mood romantic and welcoming. Wine bottles displayed in various nooks and crannies hint at Syracuse’s vast and varied wine selection,

which the food menu is designed to match. Philippa Sibley is one of Australia’s leading chefs. Best known as a pastry and dessert specialist, Philippa’s solid old-school training and respect for timeless, classic cooking techniques has steered her reputation as “Savoury Queen” status equal to the sweet. Her focus is on seasonal, sustainable ingredients from local producers and “marriages of flavours: tomato and basil; mushroom and game; peach, raspberry and vanilla. Strawberries and cream. I’m a sucker when it comes to the old school, I just like to put a new spin on it. 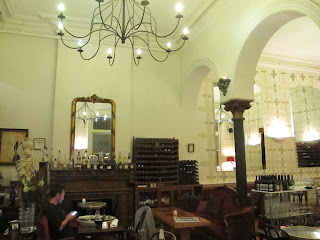 We had the pleasure of eating at est est est and Ondine many years ago but did not get to Luxe or Prix Fixe while Phillipa was there but we were very keen to try Syracuse. It certainly is a lovely looking venue with well spaced white clothed tables.
We were going to start with a French champagne but the sommellieur talked us out of it for another french bubbly. Strangely, whilst we were all happy with it, he returned to suggest it was not quite as it should have been and would we like him to change it! We kept it and happily finished the bottle. 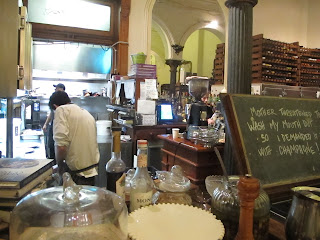 Asparagus soup with spanner crab was a delicious creamy start to the meal. 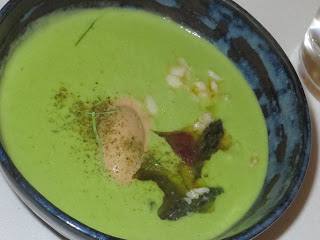 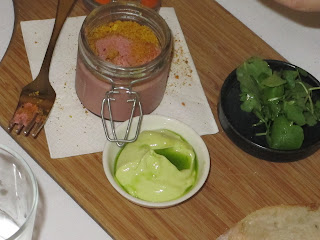 If you like pate you would enormously enjoy this one with it's light flavour and creamy consistency. 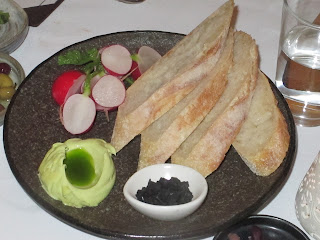 Bread was, as always, too moorish with accompanying crudites.
My wife was quite wrong when she assured me I would not like a serve of ancient grains. 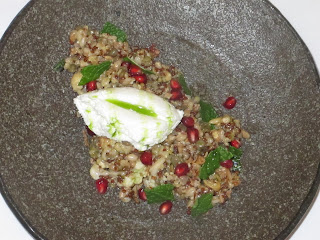 I loved them.
I was not quite so lucky with the sirloin, which was cooked exactly as requested, but was rather tough and gristly. 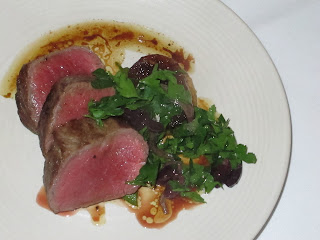 Mine and theirs again!

Murray cod, on the other hand, was totally delicious. 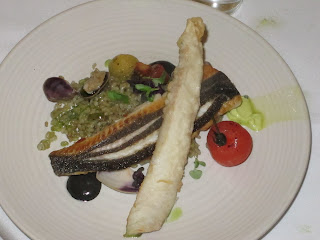 Lightly baked it's character was quite different from my previous experiences with this fish and again quite excellent.
This sort of deconstructed pavlova 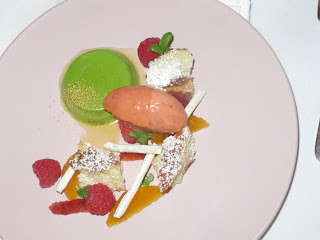 with a basil flavoured panacotta was outstanding and there were no complaints about this rhubarb tart. 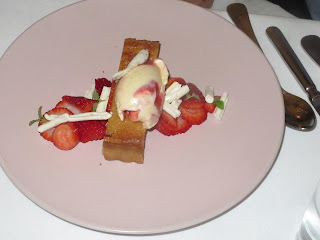