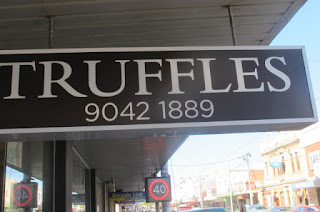 Is this a cake shop posing as a cafeteria or vice versa? 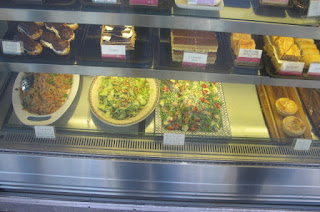 Not an uncommon combination these days but Truffles is a bit different because the food has a distinctly Polish orientation. Their version of an opera cake for example, is far from the French one we are used to. 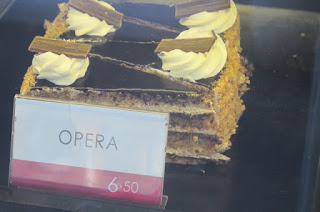 They have a board of specials, 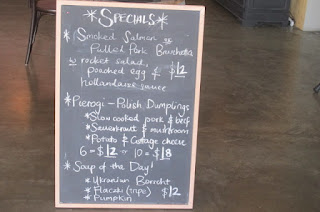 and a laminated one page, two sided menu. 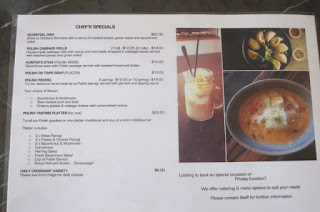 This might not have been much of a draw card for me but for one dish- Flaczki, better known to us as tripe soup. Except for the RACV, which has a tripe club which meets a few times a year, and an occasional yum cha if I want tripe I usually have to cook it myself. Not any longer. It's a chef's special on the menu every day.
The food is not expensive and the menu offers an assortment of dishes such as borscht, pirogi and schnitzel as well as a small range of traditional Anglo Saxon (is that PC?) dishes such as eggs Benedict.
It's a pleasant open venue. 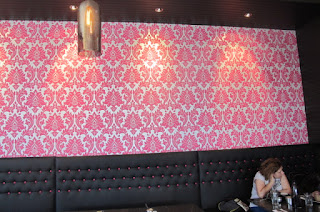 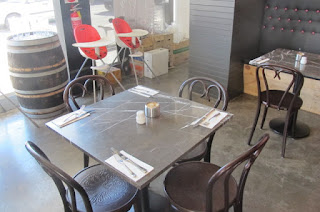 I came for the tripe soup which was excellent. 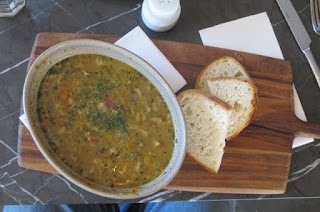 The tripe perfectly cooked, the soup tasty, not over seasoned and a couple of thick slices of lightly toasted bread. ($12) Also tried the Chef's platter - a bit of everything. 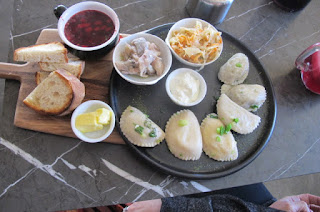 This was very average. Everything was OK but nothing stood out Borscht OK, Herring salad OK, Pirogi two each of Sauerkraut and mushroom, pork and beef, creamy potato and cottage cheese of which only the potato had any appeal, sauerkraut salad OK and bread and butter ($22)
I'll be back for the Flaczki
The cakes will have to wait for another day.
Score: 13/20
Posted by Elliot and Sandra at 11:04 PM