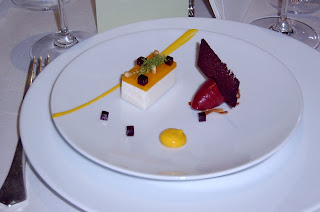 Introduction Renowned for the last 2 years as "the best restaurant in the world" I certainly rank it among the best I have ever enjoyed In the tiny village of Bray, about an hour and a half out of London - near Windsor currently it has no sign in front of the restaurant but with so few houses in the main street it is not hard to find. Reservations open 60 days ahead and usually close very soon after -say an hour or so!
Ambience In a ?18th century building, whitewashed walls and black painted thick wood beams. Old England atmosphere somewhat decreased by the slightly crowded white linen covered tables with specially made very modern crockery
Service Immaculate
Food The degustation menu with matched wines is unique
For the record this was it
Nitro-Green Tea and Lime Mousse (2001) This palate cleanser is available at Fenix and I love it!
Oyster,, Passion Fruit Jelly, Lavender. The lavender was a lovely addition
Pommery Grain Mustard Ice Cream, Red Cabbage Gaspacho
Jelly of Quail, Langoustine Cream, Parfait of Foie Gras (Homage to Alain Chapel)
Manzanaen Rama Barbadillo - Spain

Hot and Cold Tea This is a bit of magic the cup has hot tea on one side and cold tea on the other!

Mrs Marshall's Margaret Coronet Mrs Agnes B Marshall was one of the finest cooks in Victorian times (1855 - 1905). She wrote four books and tested all the recipes - they have stood the test of time. She was the Queen of Ice cream, invented an extremely efficient machine capable of making a litre of ice cream in 3 minutes and was the first to suggest making an edible cone (the coronet) from which to eat ice cream

Pine Sherbet Fountain - a fine example of nostalgia food - reminds me of my childhood sweet delights!!

By the time we got to the scrambled eggs is was a bit that way myself. Every dish is unique. Either you love it like or don't but the next will soon be there

At the end of all this you can have a choice of 12 different teas fom 12.50 (eg Silver Needle Jasmine picked in early spring before the April rains, doubtlessly by 15 year old virgins, and only the topmost buds then scented over 5 consecutive nights with fresh Jasine flowers!) to 4.75 pounds sterling that is.
Wine It was an extra 90 quid to have the matched wines. The were very generous and without hesitation offered more of anything you might wish for however you need to have a designated driver if you really want to take all that's offered I would have been perfectly happy with a reasonable bottle of white or red but we're only here once
Price I think it was 165 pounds for the Sunday lunch degustation which lasted about 4 hours
Comments Heston Blumenthal has my unbounded admiration. Without formal training , with a scientific approach and the assistance of a food chemist - Dr Peter Barham, he has reinvented modern cooking. He deserves his success
Score: 19/20