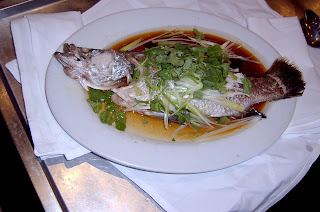 This is number one and the fun has just begun.
It's fitting that this is the first restaurant that I am discussing as it's probably the one at which I most often eat. For a suburban restaurant it is absolutely tops. It is always crowded for that reason.
Last night we (my wife and I) went with my mum in law and her partner. which somewhat restricts choice because we like to share and Max really likes only one dish - steamed king prawn with vegetables tho there are a few others he doesn't mind. We can work around that.
Shredded crab and corn soup for the oldies and pork conjee, normally a breakfast meal in China apparently started the evening on a pleasing note with a bottle of BYO bubbly. Their normally universally high standards were a bit diminished by the conjee which I would not recommend.
The soup was about what one would expect very acceptable.
the steamed prawns were large firm and very fresh and the vegetables crisp but lacking great flavour.
Things improved from here on. Prawns in batter in a sweet sour sauce were excellent. The accompanying just cooked onion, pineapple and green peppers melded well and the sauce which was neither too thin nor too thick or gluggy.
With steamed rice this is a must unless you are averse to sweet and sour
We cancelled the Chicken and noodles in a birds nest because of the size of the serves (and the oldies small appetites) and had a steamed Barramundi with shallots in a ginger sauce. My mouth is watering as I recall it. Delicate and delicious. this was outstanding.
We finished the meal with a plate of watermelon and my wife Sandra, who recently fell in love with sago, had a sago and fruit salad dessert.
All this for $30 per person!
I'll talk about other things there in future postings.
Tonight we will go to Supper Inn an institution in China Town
Is that my stomach rumbling?

One of my tests of quality for Cantonese restaurants is their Sweet and Sour sauce. Lately a lot of them have been falling below the standards I expect. Unfortunately now 1 year later (Nov 2005) IK has joined the ranks of the ordinary in this dish. Otherwise it remains a very good suburban restaurant
Score: 16/20 for Yum Cha 14/20 for a la carte meals
Posted by Elliot and Sandra at 4:04 PM