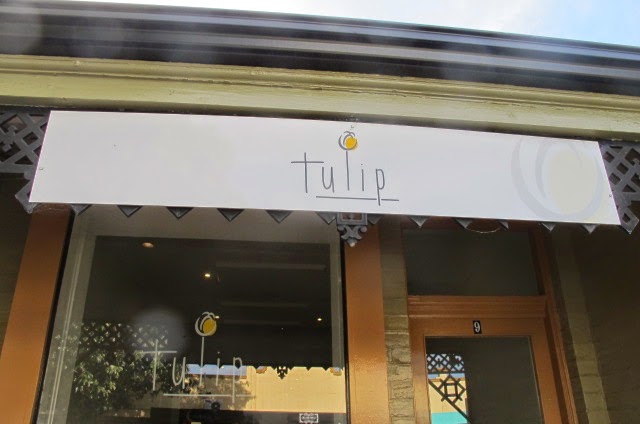 This is quite an unusual restaurant for a regional city. It looks fairly typical with an open kitchen at the end of the room 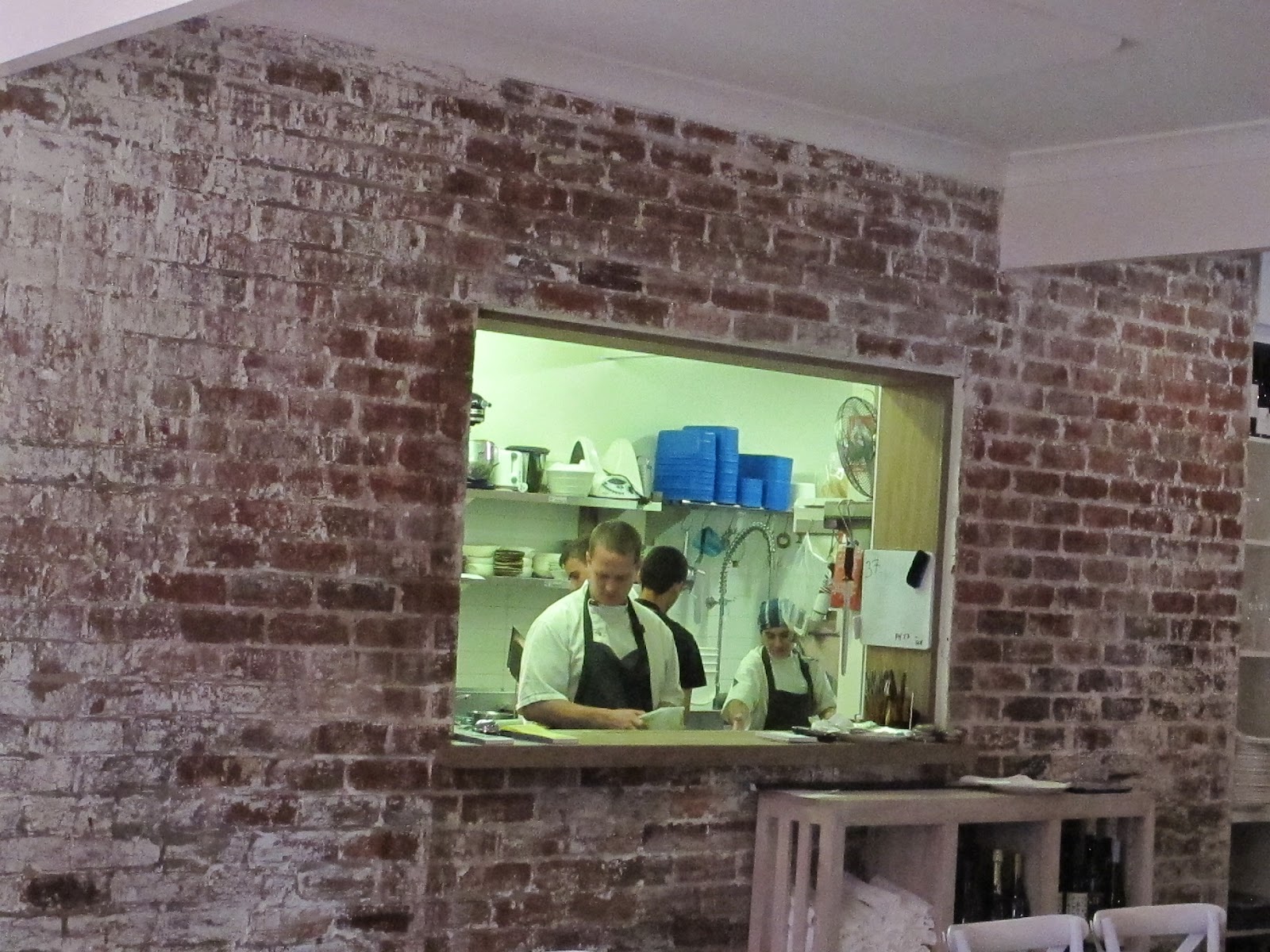 and a bar at the corner of a large L shaped room with bare brick walls. Decor is simple and furniture reminiscent of Ikea. Polished wood tables are bare except for white linen napkins and cutlery. White painted wooden chairs are provincial and rather hard and uncomfortable and a little low for short clients. There is an attractive little court yard fountain visible from some tables 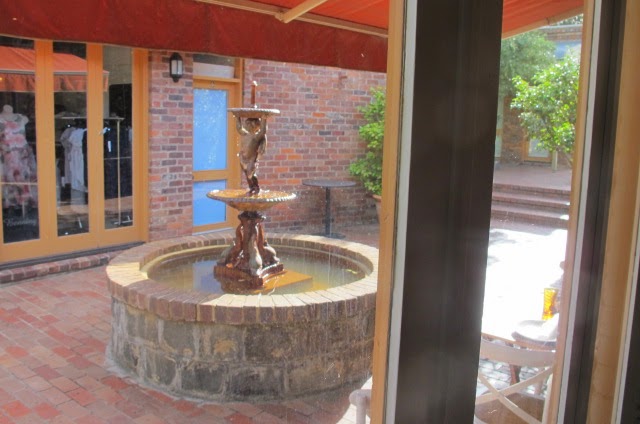 but it remains a fairly sterile environment.
The menu has a wide variety of unusual dishes. They also offer two chef's choice menus - four 'waves' $65 or six 'waves' $90. A wave is several courses so our six wave meal ended up as at least 10 courses all of which, I think, were on the menu.
The dishes came in a slightly mixed order but basically starters were followed by mains and ended with dessert.
A good variety of tasty table olives and smoked almonds were offered to start. 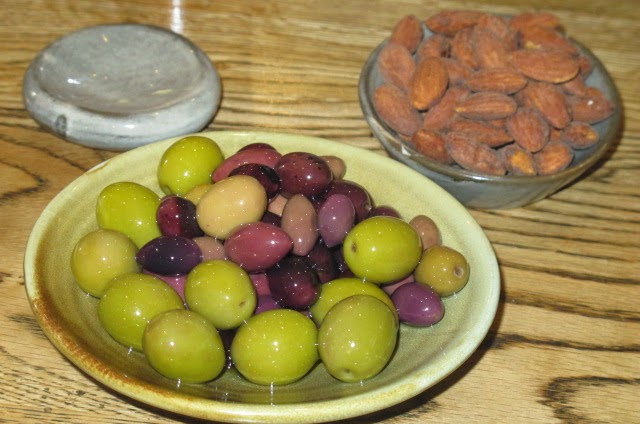 These were quickly followed by salt and vinegar pork crackling. 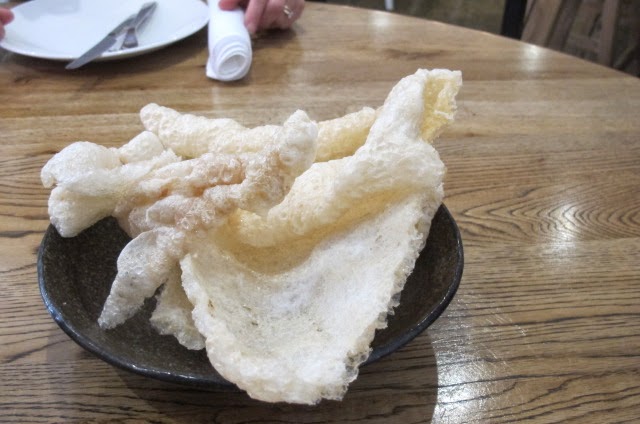 Large creamy Coffin Bay oysters with ponzu was another pleasant but not special starter. 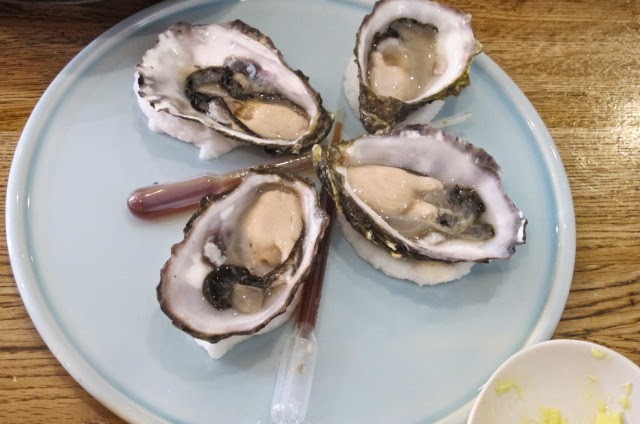 Next was a salad of tomato, dried anchovy, bocconchini and samphire. This was exceptionally appealing with both cherry tomatoes and Russian blacks adding extra flavour. 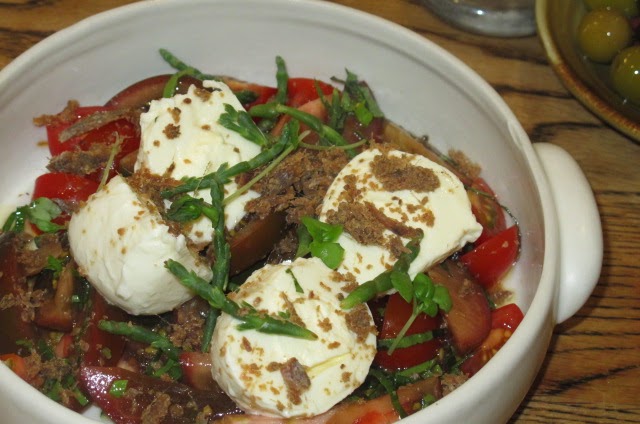 A dish of fried baby prawns with smoked mayonnaise was another textural pleasure. 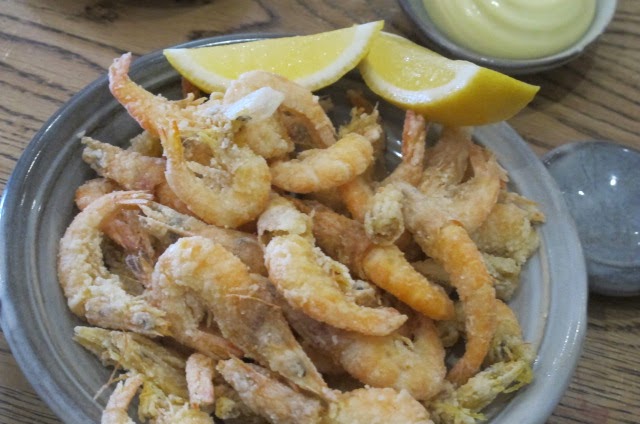 The mayonnaise had a slightly bitter, but not unpleasant, taste from the smoke.
Cured ocean trout, lightly pickled cucumber and a dressing of dashi powder with some edible succulents followed quickly. I found the trout very bland and felt it needed longer and perhaps a better curing mixture - some dill might have helped.
Wessex Saddleback capocollo - cured pork neck, was another excellent starter though by now we had eaten quite a lot to still be having entrees. 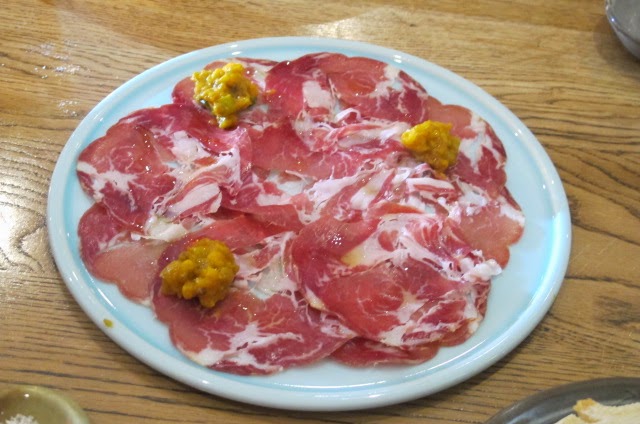 It was dressed with a few dobs of a thick bean and cauliflower paste that did not add to the excellent pork.
After all this we came to a series of main dishes starting with a completely out of this world beef brisket cucumber and smoked vignaigrette. 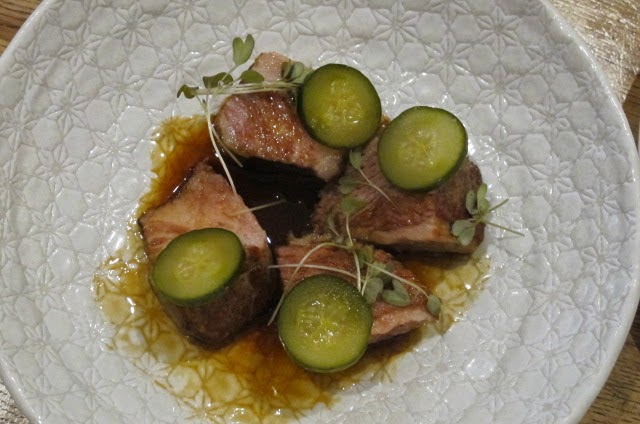 The brisket was cooked to perfection, moist, full of taste, meltingly tender. I would have it first, second and third it just cannot get any better,
A series of superb salads came next. Mixed grain, including quinoa and fricca, cauliflower and almond salad with goats milk yoghurt 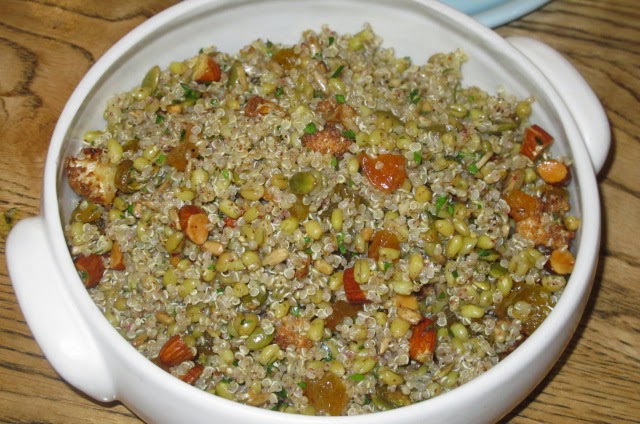 could convert me to health food!
Roasted and pickled pumpkin salad, salsa verde 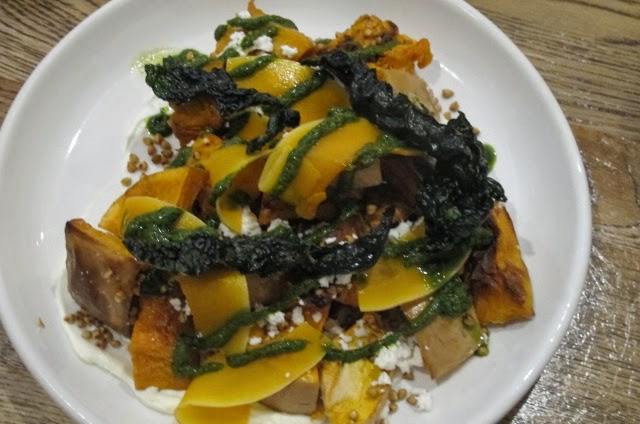 was next which was flavoured with a little chilli.
Salad of steamed kale, pancetta, hazelnuts and egg vinaigrette 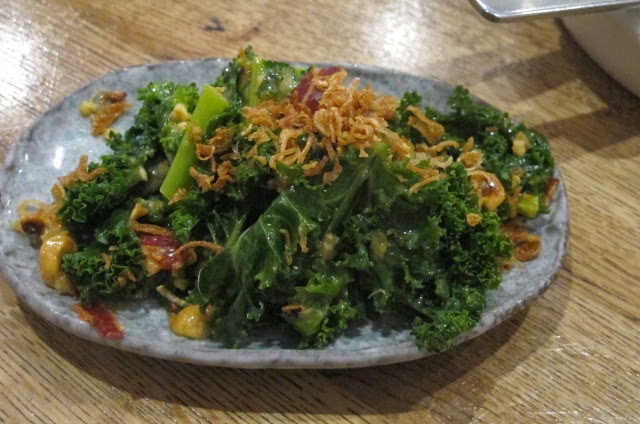 was the best way I have ever enjoyed kale. The flavour was outstanding and the textures beaut with the crunchy hazelnuts.
The final main was a scotch fillet which looked and tasted like porterhouse to me. No matter it was cooked perfectly for me but too blue for some people. 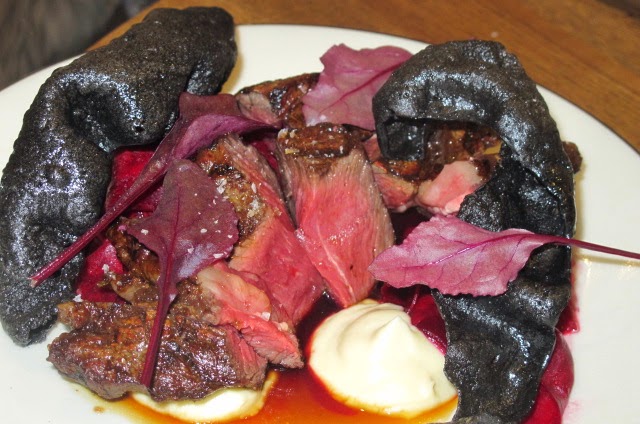 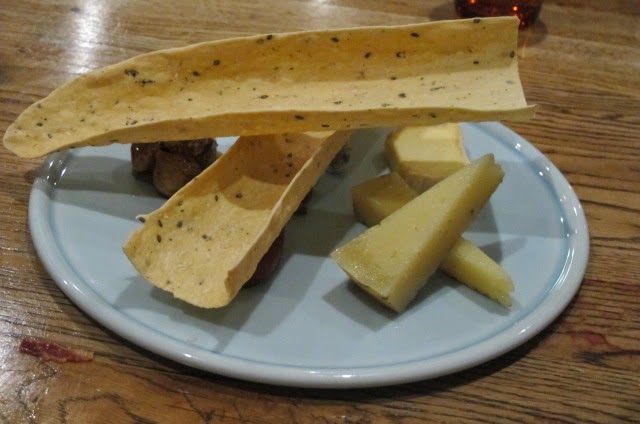 A rage of cheeses including a bree a blue and manchego precede the dessert.
Chocolate pave, a set chocolate mousse on a biscuit base, caramelized white chocolate and thyme ice cream. 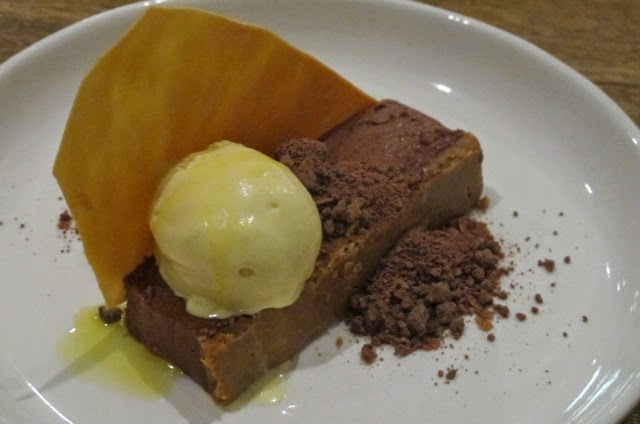 Served very cold it improved as the mousse warmed.
Tea and coffee were served with cubes of white chocolate fudge with pistachio inclusions. 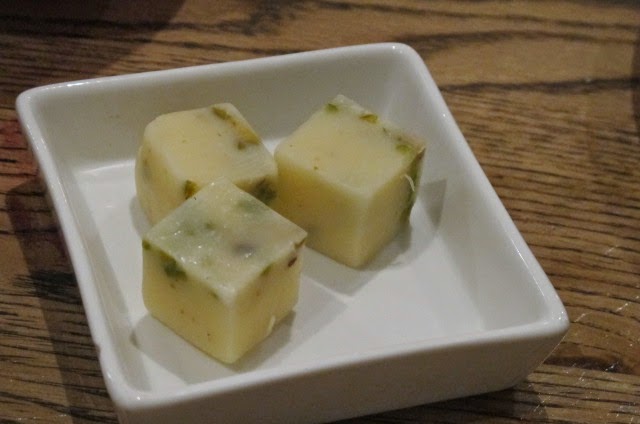 It was a very rich finish to an extremely good very very filling meal.
Comments: We had an extravagant meal cooked with care and flair. The dishes were imaginative, interesting and a joy to the palate particularly because of the fine matching of sauces and vinaigrette to the food, the mark of a top class chef. Service was friendly, informed and well spaced. They have an adequate reasonably priced wine list. We drank an amiable young Mount Langi Ghiran Cliff Edge Shiraz ($58/ bottle).
I only wish the chairs were a little more comfortable.
An excellent restaurant. Far and away the best we have eaten at in Geelong
Score:16.5 /20

How nice!! I have visited lots of San Francisco restaurants but never been to such a historical venue. I would love visiting this gorgeous restaurant. Anyways, thanks for this review about Tulip restaurant!