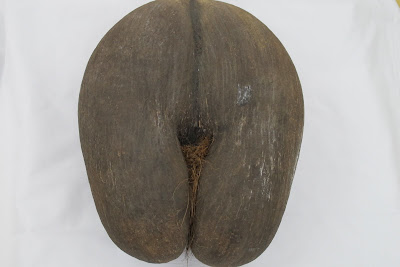 Click on the photo to enlarge it.
No, this is not another porno site.
One hardly knows where to start in writing about this extraordinary nut. It has always been subject to mystical ideas and superstition. Because it was found floating in the sea or washed up on beaches and as no one had seen it growing it was thought to grow under water in the sea. One can only imagine this vision of tall palms with massive fruit and long fronds waving with the ebb and flow of the tides. For a time it was reserved as a drinking vessel for the aristocracy, especially as it was thought to denature poisons, an idea with absolutely nothing to support it. This lack of need for evidence is hardly surprising when we think of all the weird ideas that have currency today. It has also been used in aruvedic medicine and in traditional Chinese medicine.

So here are some facts It is the largest nut in the world and takes several years to grow to its full size. The tree, which can grow to over 30 meters in height, takes between 25 – 50 years to reach maturity and bear fruit. Leaves may be 10 meters long! Fruit may takes about 5 years to reach maturity and 2 years to germinate. A mature nut can weigh over 20 kgm. They are heavier than water and only germinated rotted out fruit float, thus they will not grow after being washed ashore. Their botanical name Lodoicea maldivica relates to King Louis XV and the Maldives where they were originally found. An earlier botanical name was Lodoicea callipyge from the Greek meaning beautiful buttocks! 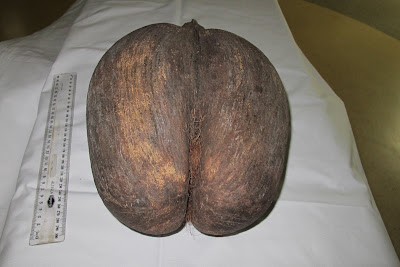 It is known locally as a love nut.

After about a year the nut has a slightly sweetish gelatin like edible inner layer. This slowly hardens to become rock hard. In 1786 it was found to be endemic on several uninhabited islands in the Seychelles. It is now only found on the islands of Praslin and Curieuse, where it is protected, and in some botanical gardens, in the Seychelles. Planted sub populations occur on Mahé and Silhouette Islands.

The long maturing time, the exploitation of the seeds, the threat of fire have made this exotic plant vulnerable to extinction.

On first glance I was wondering if this had something to do with men's health!
Good on you Elliot for stimulating the senses!

It's good that you blogged about this - because in Hong Kong's dessert houses we sometimes eat this, its called 海底椰 in Cantonese/Chinese. But I've always wondered about what the heck it even is coz we just eat it but never ask!

We also drink something called a Hasma Fallopian Tube drink in HK, which everyone knows they have medicinal properties. But I bet 98% of the HK Population doesn't know its some sort of fallopian tubes coz it doesn't taste of anything. We need to try it out again when u come by Hong Kong :D

Hi Anon,
We always wanted to have a thoroughly stimulating blog!
HK Epicurious
When the origin of this exotic nut was discovered it was heavily harvested, became readily available for a time, and the previously very high prices collapsed. Shroud, short sighted and morally defective entrepreneurs then stockpiled the fruit and burnt down the natural plantations to create money making opportunities. For this reason they are now fairly rare, vulnerable to extinction and protected. It surprises me that they are served in any form in restaurants any where today.
Anon
Congrats on your blog. I love your honest appraisals. Having read The Bridges of Madison County I'd love to visit Wisconsin but I don't see it happening for a long time.
Cheers
E