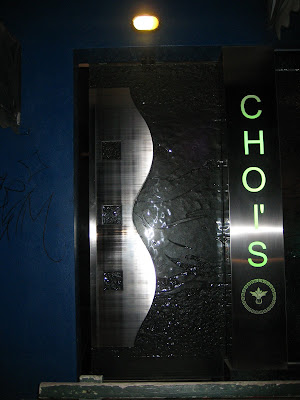 Under a wide green canopy Choi's impressive glass entrance door slides open as you approach (the wonders of electricity) to reveal a large sophisticated looking restaurant.
The wall behind the counter is plastered with dozens of framed certificates of recognition ot their culinary prowess. Tables are set with white linen and fine Royal Worcester plates that immediately impress 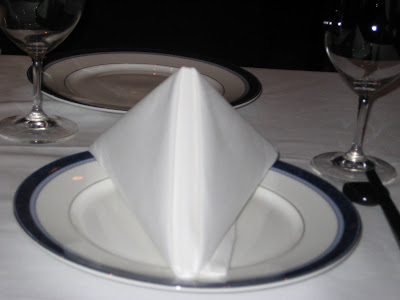 Eat in or take away, licenced or BYO the place is busy, very very busy. Sometimes one table may be used for three seatings on a night and two is common.
I asked the major domo - Justin- to organize a nice meal for us and he most certainly did.
We started with a 'seafood pear' a surprising dish for a Chinese restaurant. Shaped like a pear a deep fried crispy exterior concealed a succulent creation of potato and seafood. a delicate taste and great start. 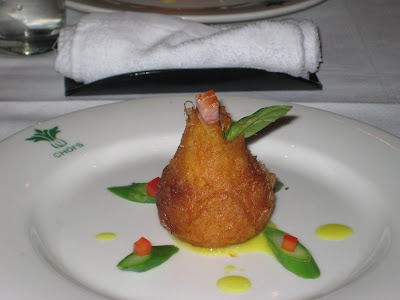 This was followed by crab dumplings with a light vinegar dipping sauce. 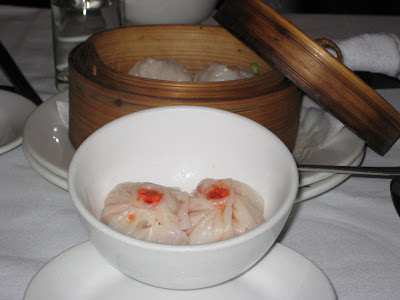 The first main course was roast duck with a sweet chili sauce and fried rice. Tender and tasty with little fat I would have preferred the skin to have been much crisper. The accompanying dish of Chinese broccoli was in a very nice light soy sauce. We followed this with sweet and sour prawns in batter. The sauce was light and well balanced but the batter had lost most of its crispness by the time it got to the table. 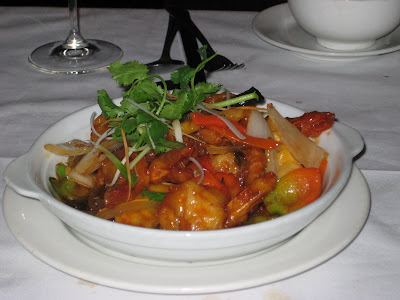 The smooth black sesame seed ice cream was quite nice with appropriate flavour.
Wines by the bottle are quite inexpensive but relatively dear by the glass though the serves are generous. We had a Frontingnac Moselle with the seafood and a Mornington pinot noir with the mains.
I found it jarring to see the tables which are extremely tatty with their cloths removed for resetting.
The only other disturbing aspect of Choi's was the number of times the purple jacketed young waiters crashed into each other in their haste to meet the needs of their customers.
Dearer than some local restaurants we ended up with a bill for $162, including four glasses of wine, for the night
Comments The food was so very good I will not hesitate to return
Score: 14.25/20
Posted by Elliot and Sandra at 11:36 PM