New year eve (NYE) is an occasion for celebration, like a birthday. It's also a time for resolution and reflection. Mostly I've been pretty disappointed in the fancy restaurants we've visited for fine meals for NYE. Per se in Manhattan overwhelmed us with foie gras and caviar, Pierre Gagnierre destroyed our palates with 25 year old Pied de Cheval oysters, we've also celebrated with indifferent meals in Amsterdam and in Israel over the last few years. Now, for a change, we're eating at home, well in our home city anyway.
Here are the dishes.
Summer vegetables, cooked in paperbark , with an avocado dressing. 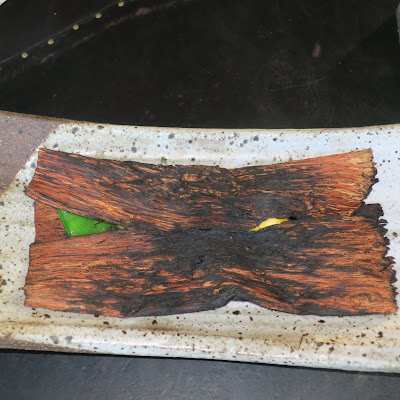 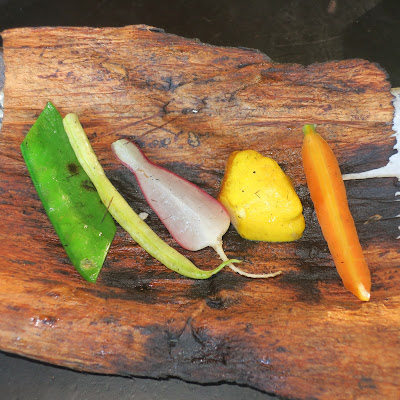 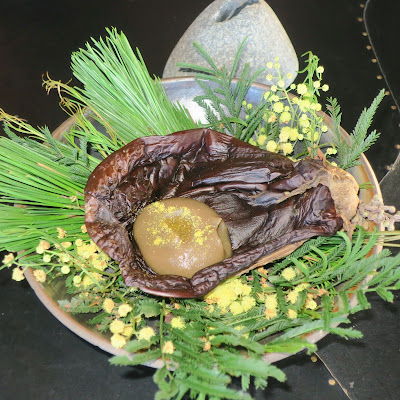 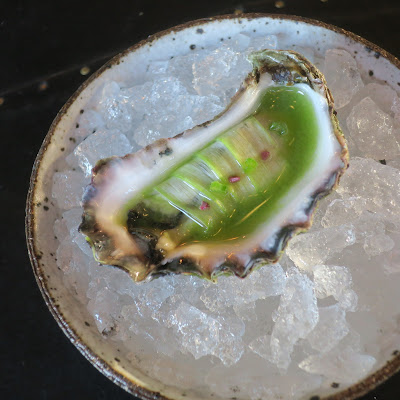 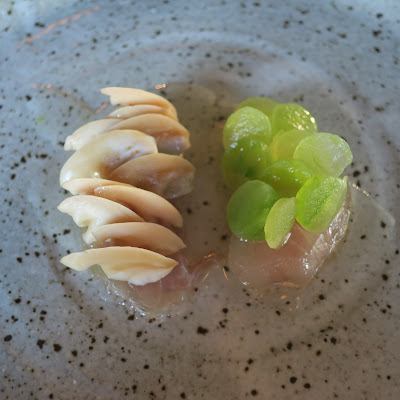 Mudcrab wrapped in kohlrabi in a squid ink sauce, decorated with daisy petals. 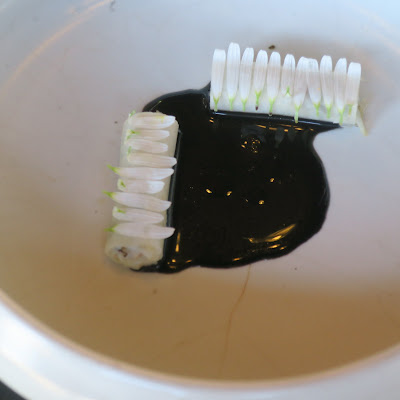 Flat bread and damper, (but not damper) served over coals, with a vegemite flavour. 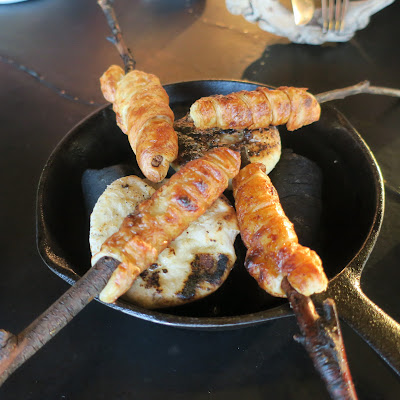 Followed by marron in a corn sauce,\ and kelp. 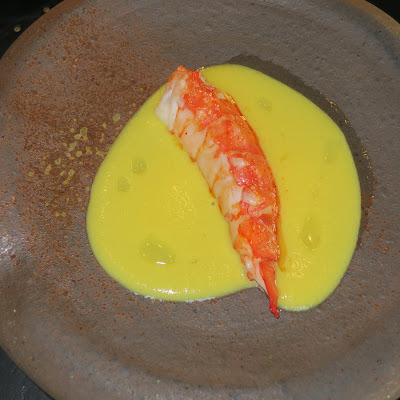 accompanied by the stuffed marron head. 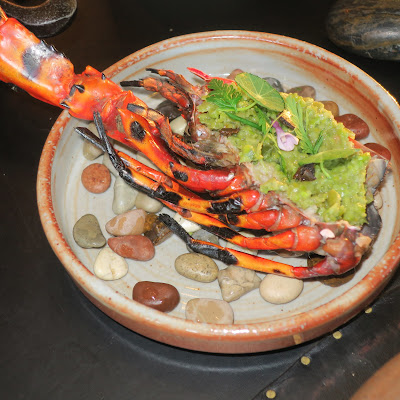 Davidson plum sorbet, served on a bed of edible flowers frozen with liquid nitrogen at the table and crushed with a pestle - the traditional VdM palate cleanser.
David Blackmore grade 9 ribeye, muntari berries and beetroot 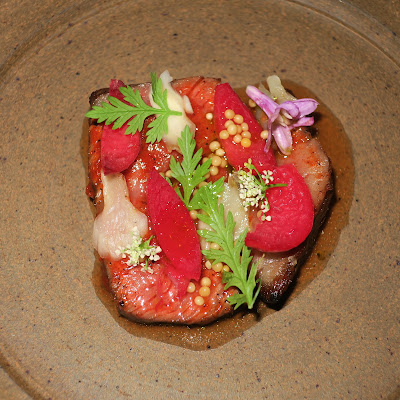 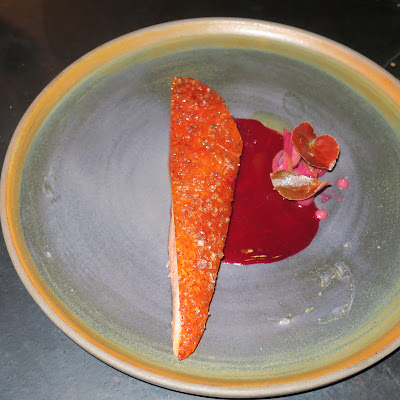 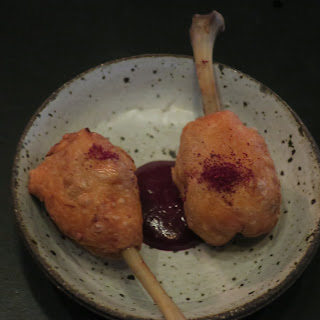 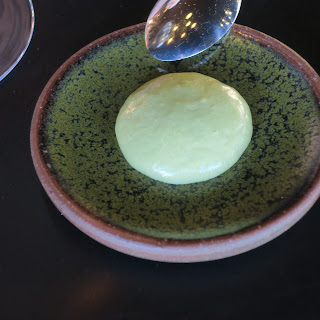 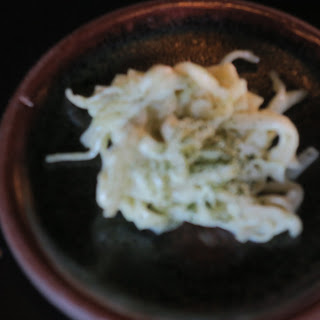 A selection of cheeses. Not on the menu but generously offered to us as we found some of the food unpalatable 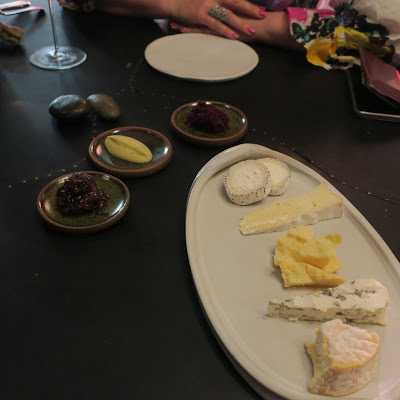 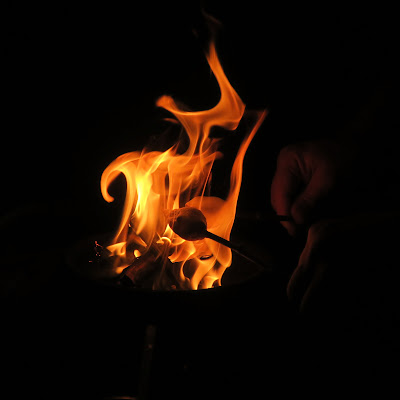 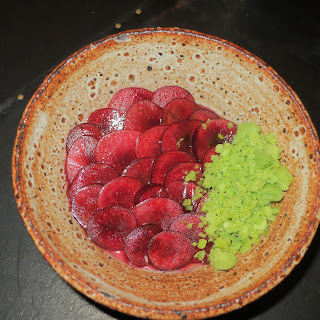 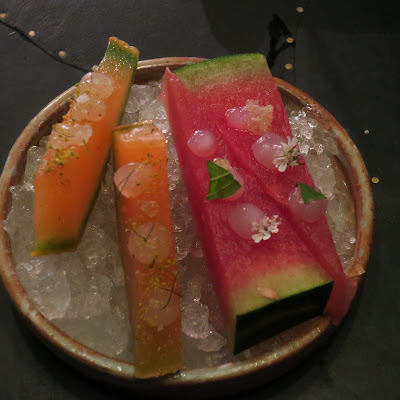 We drank a very good Eva Fricke 2012 Schlossberg Spatlese through the meal. 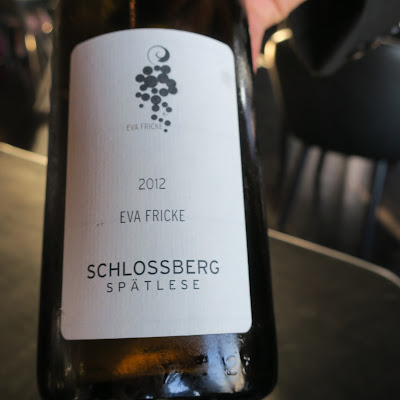 While many aspects of a meal we ate resemble what might have been served five or ten years ago in fact it is a superficial resemblance. Of course the venue is fabulous. Absolutely fabulous. 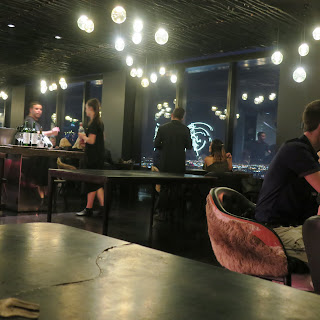 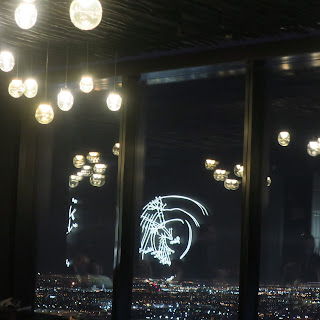 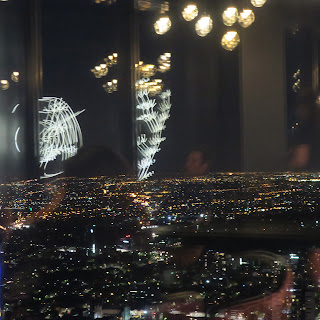 Kangaroo skin covered tables, too wide for easy conversation are the same, the Cristofl cutlery is there as are the vine root fork and spoon stands and the stone salt and pepper dishes. The glassware is excellent. 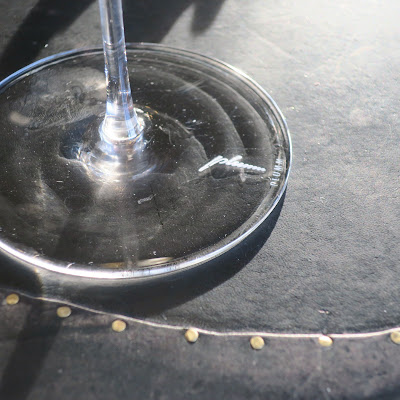 The European crystal Plumm glassware added to the pleasure of the wine.

The emphasis, however beyond being fresh, local, organic, and so on has moved away from those distinctive characteristics that distinguish French cuisine toward an increasing Australian emphasis.
Examples of this are clear in the damper and flat bread with Vegemite flavour and the sausage sizzle, a DIY seafood hot dog with separate brioche roll and accouterments, which are becoming signature dishes. Unfortunately in this move towards political correctness in the Australian context, the use of quondong and Australian plums and berries adds a sour note to sauces which, for us spoiled the pleasure of an excellent piece of Waghu beef the flavour of which was lost. Similarly the perfectly cooked slice of duck breast also had a vinegary taste that detracted from the dish. Other dishes also suffered from the sauces they were served with. The marron was served on a corn based sauce, far too heavy for the delicate marron.
There were a very large number of kitchen staff working extremely hard to plate up dishes 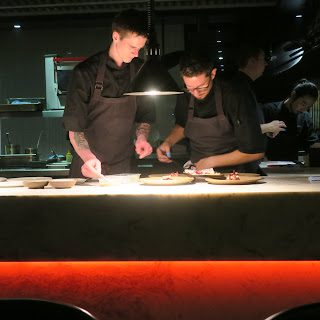 which were mostly striking in appearance, pieces of art really, for example the crab in kohlrabi covered with a neat row of daisy flowers but again the combination of crab with kohlrabi simply did not go well together.
Not only did the guests make a fair bit of noise but there was a great deal of shouting from the kitchen - not quite in the same class as Ramsay but getting there.
There was a large contingent of floor staff who all tried very hard to provide the sort of impeccable service one only gets at top of the line restaurants.They did as well as it is possible to do. Although we have been to VdM four or five times times this year I recognized almost nobody. Somehow they have lost the personal touch which was a feature of the place in the past. They were extremely attentive to our requests and replaced a couple of dishes. In fact we were offered an additional dish of cheeses, not on the menu, to make up for our dissatisfaction with the dinner. Incidentally of the six cheeses all, bar one, were from Australia. What was missing was a sort of intimacy between the kitchen, the floor staff and the patrons, an intangible je ne sais quoi.
VdM has moved with the times but for me,
Score: 16/20
Posted by Elliot and Sandra at 12:44 PM