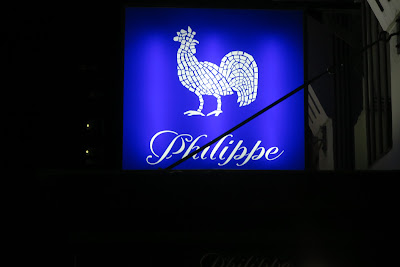 Perhaps Philippe Mouchel will have more success at this subterranean site than a number of his predecessors. certainly he was busy enough last night with only a few empty tables and customers still arriving at 8.45 pm. The venue is unchanged from when Brooks was here. Decor is pleasant. Good sized white clothed tables have paper protection. 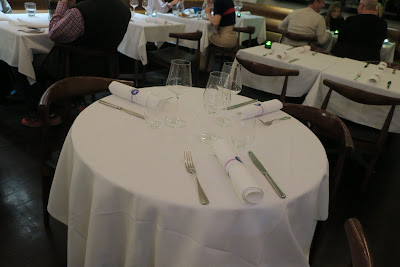 Chairs are hard and not comfortable but there is a soft backed settee running the length of the wall. 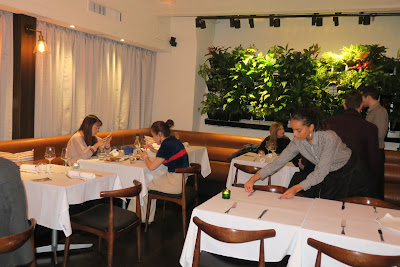 They have a couple of glass cabinets featuring meats, cheeses and other produce. 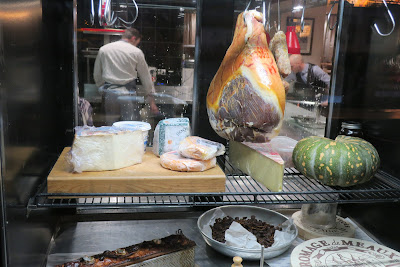 The busy Saturday night had an unexpected down side for us. They had a seafood platter on the internet menu but not on the table menu. Some were lucky enough to get that but it was sold out when we wanted to order. Soup was also sold out! They have a Plat de jour - Saturday night is Cassoulet night - guess what, sorry no more cassoulet available. The one page menu is quite small so there were few attractive choices. 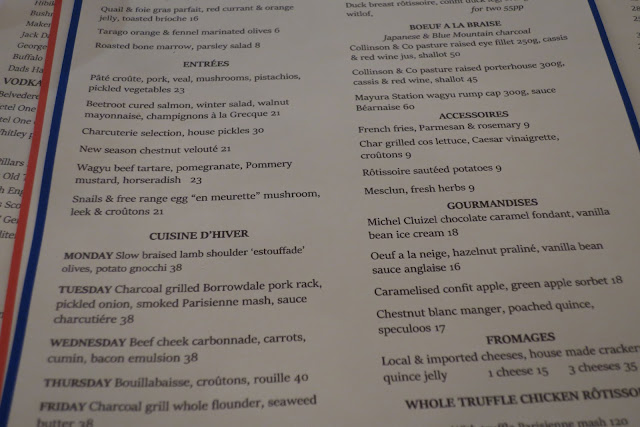 We had had a superb charcuterie platter at  Phillipe's Russel St restaurant (I think it was called FM 15) a few years ago but I wanted something different. We settled on sharing two different entrees, a beetroot cured salmon and a snail dish. 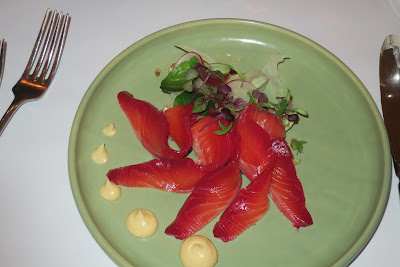 A pretty presentation the salmon was as good as it looked. The accompanying salad delicate, colourful and did not dominate the salmon which was superb.
Snails with free range egg "en meurette", mushrooms, leek and croutons ($21) was another story. 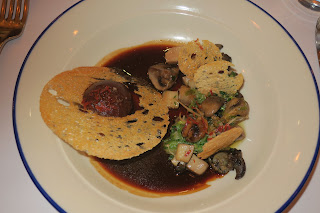 Meurette sauce is a wine sauce rather like gravy, the egg in this recipe is poached, firm white with a runny yolk. it was as it should be but the snails, I think there were four of them, were no way enhanced by the rest of the dish. they need not have been there at all.

We were very limited for mains (Plats principal) The duck dish ($55/person) was for two and I wanted variety and did not particularly feel like duck. The vegetarian option did not appeal and I did not want a fillet of snapper so that left the meat.
I settled on the slow roasted lamb with sweatbreads and eggplant ($40) and Sandra chose the Waghu rump cap ($60). 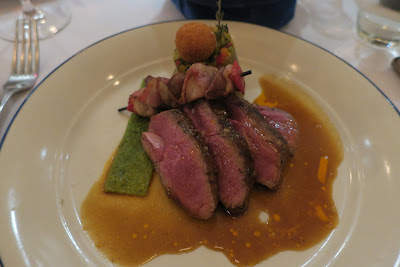 The lamb was nicely seasoned and cooked as requested. The sweatbreads, on a stick with a strip of bacon dividing them were good too but it was a tiny serve.

Sandra's waghu was a bit chewy as you would expect 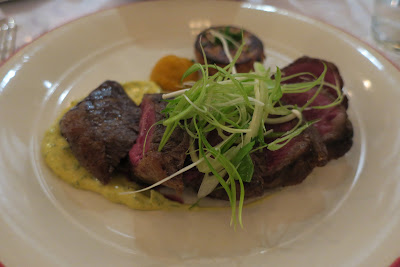 and never had much marbelling.
Our waitress suggested we have a side dish (Accessoires) and we chose the char grilled cos lettuce with Caesar vinaigrette and croutons ($9) 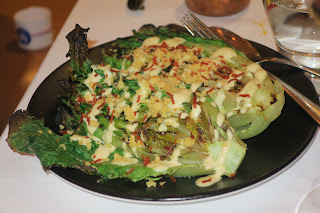 a great choice, we both thoroughly enjoyed it.
The dessers (Gourmandeses) were not exciting but if we waited 15 minutes we could have a souffle. Yes please. 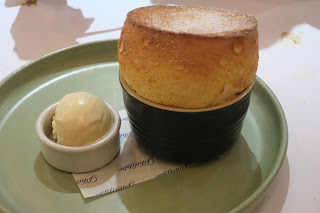 It looked fantastic. Unfortunately the texture was all wrong, almost cake like and grainy and the liqueur overwhelming.
Our waitress tried to be helpful but struggled, not being able to make sense of her notes which appear to have been written on a paper serviette or a Kleenex tissue. She knew nothing about the wines. they have quite a good list and they are not excessively marked up.
I'm finding these little touches of French or Italian on menus a bit pretentious. We all know what they are. It's about time they stuck to English, or if they feel the need to acknowledge the origin of their menus useFrench or Italian or whatever!!

Posted by Elliot and Sandra at 1:58 PM