Are They Worth Their Stars The Lake House (Daylesford) 09/2012 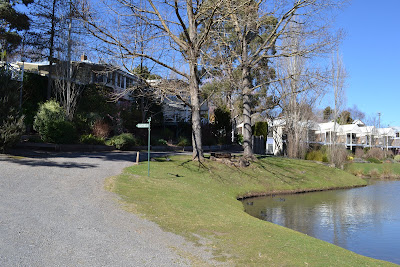 This lovely old hotel has been an icon in Daylesford for decades. Something like a country guest house cum chalet of the 1940’s it has been built from the ground up by Chef Alla Wolf-Tasker and her artist husband Allan and constantly upgraded with new cabins being added and facilities improved. We had a lake view room with a great view over the Daylesford Lake with it’s geese, ducks swans and pheasants roaming freely about the gardens or swimming in the attractive artificial lake.
There is a common guest lounge a tennis court and a highly regarded spa ($95 for half an hour)
A la carte or a degustation menu is available ($135) with a vegetarian option ($125) and matched wines. ($80)
Meals are served in several dining areas. The main room being a very large open room with floor to ceiling windows looking over the gardens and lake, which is not visible at night. 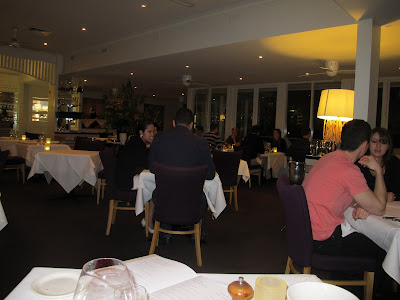 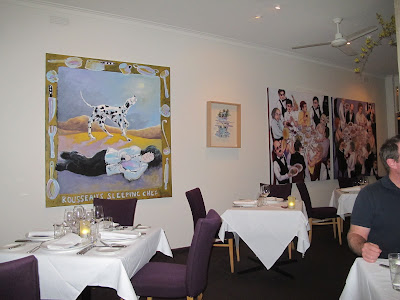 Tables are set with show plates with prints of Allan's paintings, which can be purchased ($70). 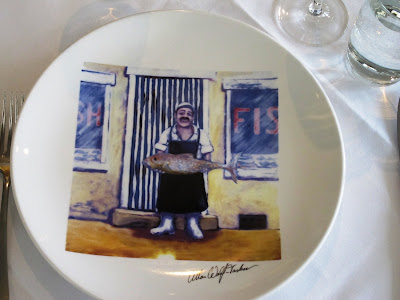 The Early Spring degustation menu offers included Egg, anchovy, brioche. This delicious small bite demonstrates another great thing to do with anchovy which brought the whole dish to life. 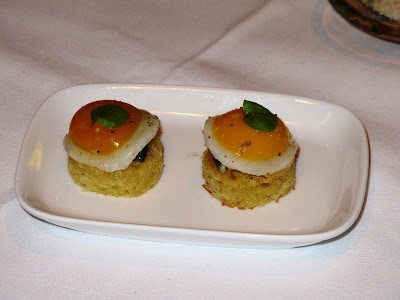 We started with a crisp Jim Barry Riesling which matched the sea food dishes. Trout sushimi. smoked trout dumpling and broth. Here the flavour of the shredded smoked trout in the dumpling was lost and was overshadowed by the sushimi 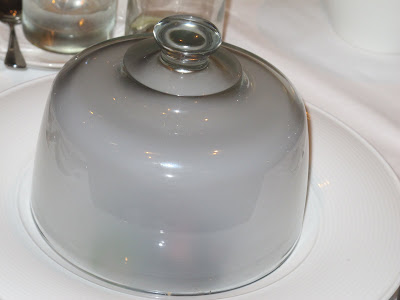 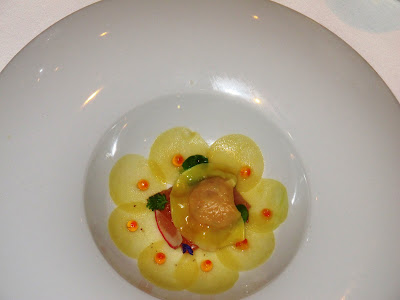 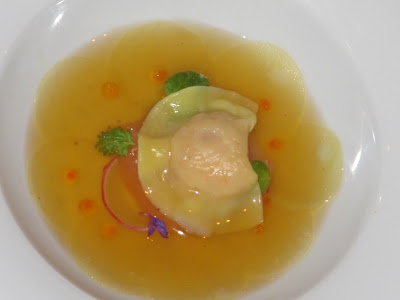 Smoked Skipton eel, pancetta, heirloom beets was sublime. Picture perfect, beautifully presented, a wonderful combination but the eel alone would be enough to put Skipton on any ones food map. 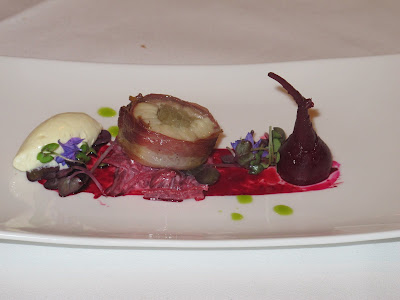 With the meat dishes we moved to a very pleasant Pinot Noir. 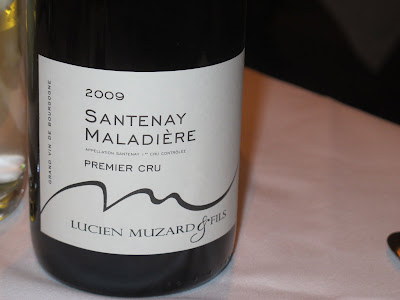 after which we enjoyed a 2010 Syrahmi Siren Shiraz. They do have an extraordinary wine list extending over 34 pages.
Rabbit-cassoulet, loin and cottechino salad was another fabulous dish. The loin had been cooked sous vide and lay beneath the salad. The cottechino was crisp with a little chili sharpness which contrasted with the rabbit. The cassoulet was also superb, covered with a crust of crunchy fried parsley and chives it was moist and delicate. By far the best I have ever eaten. 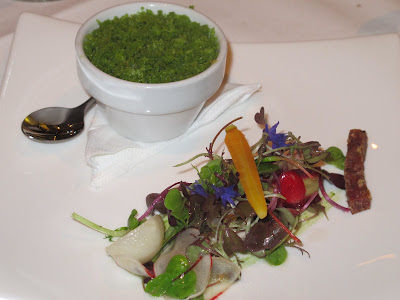 What can a chef do after that. Another super dish. 12 hour Mt.Mercer pig, blood pudding crumb. A rolled pork belly with a crisp thin covering almost melts in the mouth on a slightly spicy bean salad, a carnivores delight. 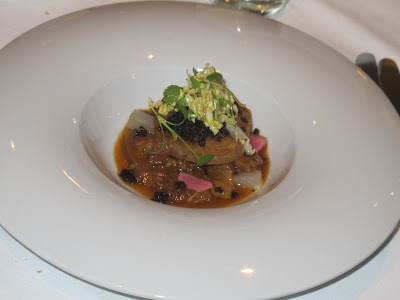 Kangaroo, smoke native spice was only slightly gamey. Cooked rare, without an ounce of fat it was remarkably tender. 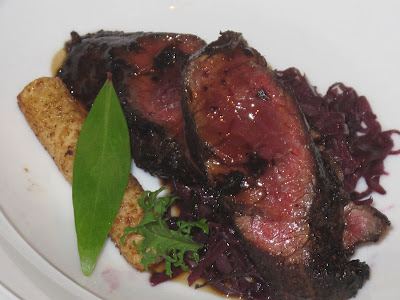 Lollipop. an Italian meringue covering a ball of lemon curd amounted to a palate cleanser 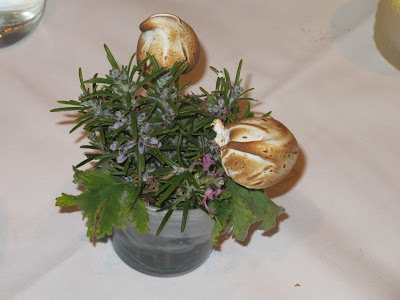 was followed by a very delicate dessert simply and well described as citrus, white chocolate with a Stanton and Killeen Classic Tokay. 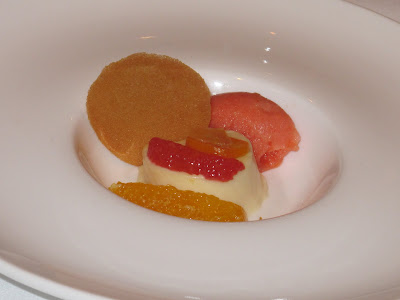 and a second dessert as we wanted to have a Pedro Jimenez sherry, described as 'Violet crumble' textures of chocolate, winter violets, honeycomb. What was outstanding here was not mentioned on the menu. It was a small quenelle of violet ice cream which was out of this world. 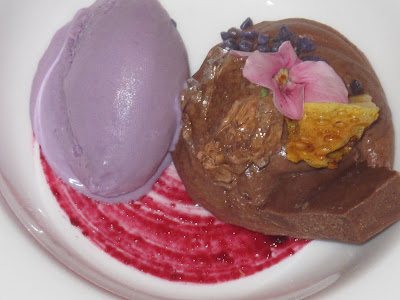 Coffee and sweet indulgence from the bon bon trolley completed the meal. 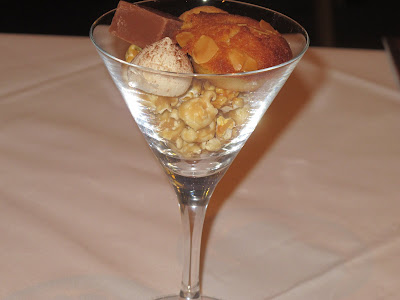 Another day another dinner, lunch actually. The vegetarian menu is another remarkable indulgence.. Here there is an initial offering of mixed olives in oil. 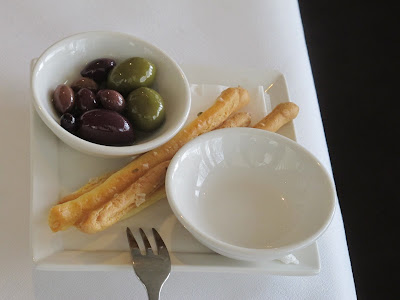 They bake bread twice daily too. First course is quail egg, green olive brioche. This has a distinctive garlic flavour and looks identical to the quail egg with anchovy.
Chestnut/Armangnac veloute, wild rice, chestnut blinchik, truffle. . The blinchik, normally a fairly prosaic Russian accompaniment balanced the veloute which one of the richest Sandra has ever tasted, luxurious with a wonderful aroma from the mushroom grounding the chestnut flavour which further stabilized this wonderful dish. 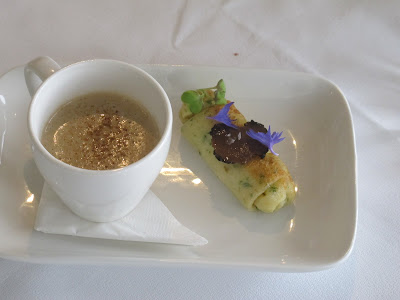 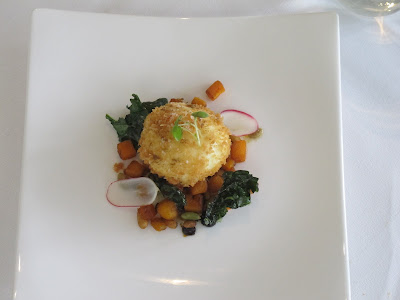 Tempura tofu, yellow bean paste, funghi. This was the sexiest dish, the earthiness of the beans and the silken tofu, also a bean product and the crisp tempura created a dish made in heaven. 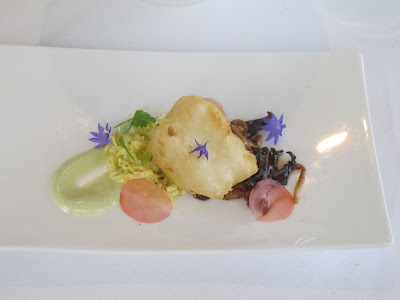 Goat curd, tortellini, mushrooms. The goat curd over powered the mushroom a little This was a dish with powerful earthy flavours, a great vegetarian dish. 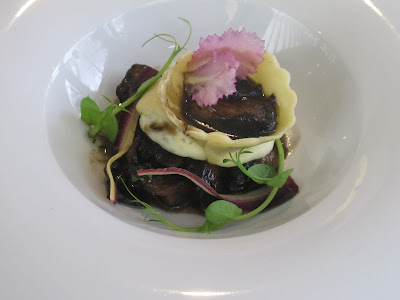 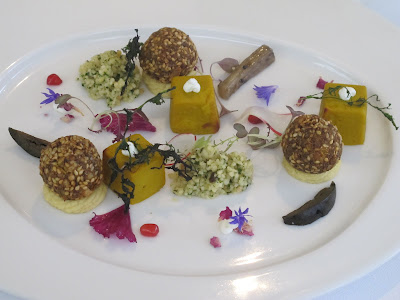 I did try one more dish which was not on the degustation menu. Moreton bay bug, black bream, fennel tagliatelle, which was actually squid and some sort of kale. This was not quite as good as I would have hoped. I find bugs very often have lost their flavour by the time they get to the table and, although the rest of the dish was great, the bug was disappointing. 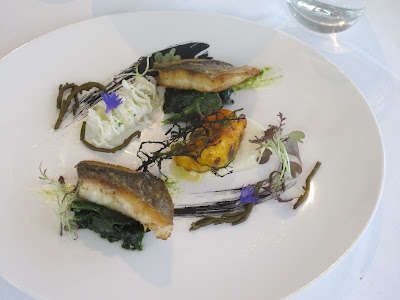 The meal was completed with the same lollipop chocolate mint and coffee and sweets as in the other degustation menu.
A totally satisfying culinary experience, beautifully presented, every dish a small masterpiece of art and taste. This was an outstanding restaurant experience. Was it worth it's stars? The Age good Food Guide under rates it at two hats. In our book it's worth three!
Score: 18/20
Posted by Elliot and Sandra at 11:15 PM

Have you tried their new venture in the Wombat Hill Gardens? I had a few issues with the way it's set up but the food was pretty good.

This meal looked so great indeed.

All the thoughtfulness put into it all. Almost seemed like it's too fussy - but then again, where does the balance point lie? :P The only picky thing I could pinpoint on is the presentation bit, which can still be improved enough in terms of being NEAT too !

Really wish I could eat eat soon. Hope I can be a catalyst and be promoting the Australian food schene then :)

Hi Great Eats
We saw the gardens but there was no food available.
Hi HK
It's an problem for chef's doing degustation menus as to how many courses and how simple or elaborate they might be, should they be a whole meal or more a display of culinary skill, should courses have some relation to each other or be free standing individual delights. Where do amuse bouche fit in to these menus?
The dishes here were moderately complex but there are much 'fussier' dishes at some of the great restaurants.