Supposedly another jewel in the collection of upmarket restaurants at the Crown entertainment Complex a $10 million makeover of the space formerly occupied by Prada has produced a venue which I found pleasingly understated. Good sized tables, adequately spaced with double linen cloths and napkins, comfortable seating, striking light fittings 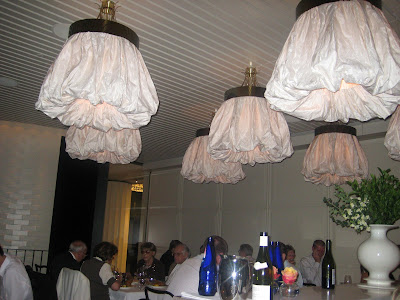 and unusual shaped structures that serve to both divide the space and provide a surface on which to rest bottles and decanters produce an air of quiet sophistication.
We arrived punctually and were seated promptly. The wine and food menu's and crusty bread, brought in by the way, butter and salt also appeared quickly. We were not rushed to place orders for drinks, for which I was grateful as they have an extensive, and expensive, wine list (even sparkling water is a hefty $10.00/bottle) with a concentration on Australian wines with a small offering from other countries, including French.
The menu included some dishes to be shared by three or four people and included a plat de jour which changes daily.
The chef's offering of pre dinner gougers was stone cold which did nothing for the taste
We tried several starters. The French onion soup ($16), served with blue cheese rather than the more common Gruyere, was overwhelmingly sweet because the onions had been over caramelised. A dozen oysters with a vinaigrette and a half a lemon ($42) were small and of indifferent taste and texture. I would not serve oysters like that to guests at home and certainly expect better a these inflated prices.
All was not lost though.
The sweet bread mille feuille was absolutely wonderful. If you like sweet breads ($25), cholesterol permitting, you will never get them better than this. Superlatively prepared I certainly have never had better. 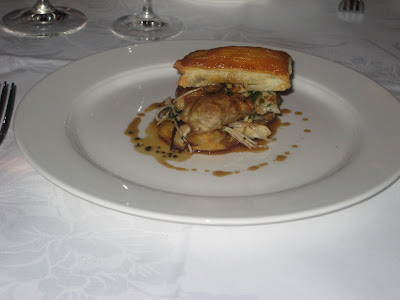 Mains are somewhat variable too.
The now famous fish and chips - crumbed deep fried boned whiting ($45) arrived on it's pedestal of broad chips reminiscent of a mastless ship on display. 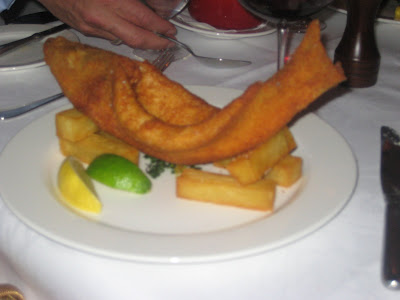 French food is famous for its' sauces but for this there was only a lemon butter sauce however a Bearnaise actually for the steak was available. The more common sauce Tartare was not available.
The fish had retained moistness and good taste beneath the copious crumbs.
The duck confit ($35), only one leg and thigh, was very good but no better than at several other French restaurants. 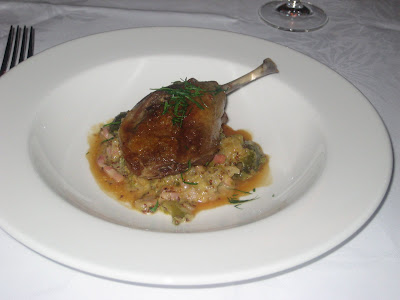 For dessert I tried the Creme cassonade ($18) a custard which was very rich and smooth contrasting with the crunchy topping of sugared nuts.
The Poire Belle Helene ($18) was the classic cooked pear with rich chocolate poured over it at the table accompanied by a scoop of ice cream. 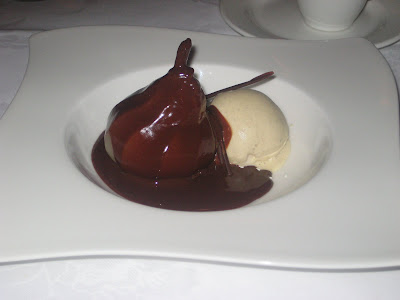 The sorbet selection ($18) - chose three, lemon, chocolate and strawberry in this case, was three small scoops of sorbet quite nice but most distinguished by the price
A bottle of Denis Ciarre red burgundy ($80) was unimpressive and I ended up with dregs in my glass!
As they've said on many a report card: can do better must work harder
Score 14.25/20

Posted by Elliot and Sandra at 5:38 PM

Good to read your review. i was planning on returning thursday night but pulled out for attica (which was sensational) and was going to order the sweetbreads and whiting - i believe the fish is supposed to be served with maitre'd hotel butter. I thought the food I ate was of a high standard: probably in-line with what I would expect at other top French restaurants, bearing in mind that this is designed as a bistrot. I also liked the understated elegance and sophistication of the room.

Good to see they have made a few changes as well: that you were served an amuse (even though it was crap), and that water is now $7.50 - still expensive but not as bad as the $10/bottle I copped on opening week.

Hi Jon
You're right. The fish, which was excellent, is serveved w maitre d' hotel butter but Sandra doesnt like it!
I hope I'm right about the water. Tap water is still free.I'm revisiting Attica in the next few weeks
Elliot

That's true about the sauces. I liked what I had but I'm probably realistically not going to eat at Crown or French too much.

Interesting review there...we went there for lunch a couple of years ago and absolutely loved the food, not only does the lunch provide excellent value for money, the service was a bit more relaxed and my order of the dishes ordered, snails, beef brisket and profitroles were amazing, while the mrs didn't savour the onion soup, nor the weird combination of pork belly and lentils, but loved the macarons dessert special.
All and all its one of those restaurants where not everything is a an absolute hit and really depends on what you've ordered instead.